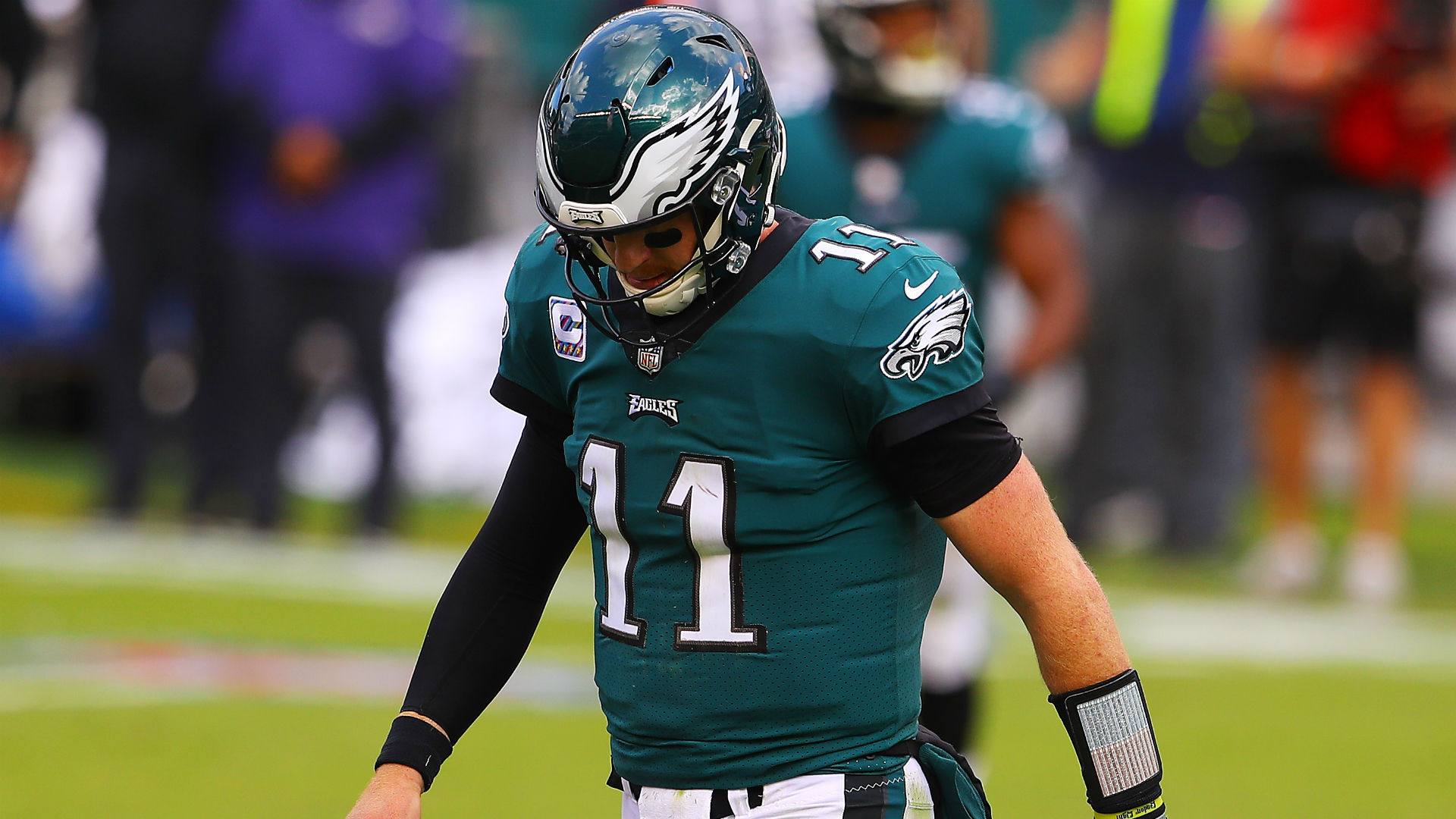 
Carson Wentz has hung his head a lot during the 2020 season, and while it isn’t all his fault, he’s deservedly shouldered some of the blame.

The Eagles’ fifth-year quarterback has already matched his career-high in interceptions thrown entering Week 12. He’s getting sacked more than ever before. And the Eagles are struggling to win games even in a putrid NFC East division. It’s brought on calls for Jalen Hurts and wondering about how long Wentz’s big contract will be on Philadelphia’s books.

All told, Wentz is having the worst season of his NFL career. While football is a complicated game and there’s no way to get inside Wentz’s head, some of the stats, facts and visuals help tell the story. Here are some of the reasons why Wentz’s 2020 has been such a mess.

Entering 2020, Wentz’s single-season career-worst in interceptions was the 14 he threw in 16 games in his rookie season. In 2020, he’s thrown 14 interceptions through 10 games.

The picks haven’t all been the same. Five have come while under pressure, but nine have been thrown with a clean pocket, according to Pro Football Focus. We’ll get into the pressure issues more below, but to throw nine interceptions already with a clean pocket suggests a combination of forcing the issue and failure to correctly identify the defense.

Wentz’s two most-recent interceptions are below. The first comes under immense pressure as Wentz is hit as he throws, turning a probable easy dump-off into a pick-six. The other just comes from a failure to identify the danger in throwing an out route toward double coverage.

Alright Eagles fans, talk to me.

I break down these 2 interceptions and am really curious as to why this isn’t on Wentz.

I’ve never seen a fan base excuse poor play like this more than Eagles fans, but would love to know how these 2 plays in particular are on Doug Pederson. pic.twitter.com/g8QCzGWCjC

The Eagles have been without a number of key offensive pieces this season for long stretches due to injury. Wentz has lacked, at times, Miles Sanders, Zach Ertz, Dallas Goedert, DeSean Jackson and a number of offensive linemen. Even more than when everyone is fully healthy, Wentz’s responsibility takes on outsized importance when he’s forced to work with second-stringers. And when the Eagles frequently trail, it only adds to the mental pressure to get things done.

Put it all together and you’ve got Wentz forcing passes or holding onto the football too long to try and make a play. So far in 2020, neither of those scenarios have worked out for Wentz and the Eagles.

It’s been injury after injury on the offensive line. Right guard Brandon Brooks tore his Achilles tendon in the spring. Andre Dillard suffered a season-ending biceps injury in training camp. Lane Johnson just had his season officially ended. Isaac Seumalo has missed seven games. Jason Peters has only played about half the season’s snaps, and Nate Herbig has missed the past couple weeks.

None of that is a recipe for keeping Wentz upright. Combined with an injured pass-catching group, players are less frequently open for Wentz to throw to in a pinch. That means he winds up holding onto the ball and taking sack after sack. Even without Myles Garrett, the Browns got Wentz those five times in Week 11.

This isn’t something that’ll be getting better overnight. Wentz could change his tact and more quickly throw the ball away, but that doesn’t help Philadelphia move the ball much more than trying to extend plays before taking sacks does. When the Eagles get in early deficits, Wentz has to try and comeback, and sometimes that means standing in against mounting pressure. For at least the rest of 2020, the overwhelming opposing pass rush isn’t going anywhere.

Eyebrows were raised when the Eagles took former Alabama and Oklahoma quarterback Jalen Hurts in the second round of the 2020 NFL Draft. It didn’t quite align with a team putting all its chips behind Wentz.

The folks in Philadelphia have said all the right things about picking Hurts, and so has Wentz. But the selection has made for week-to-week controversy this season, because every time Wentz takes the field and struggles, Eagles fans can point to Hurts on the sideline just watching and waiting.

Hurts has gotten slim usage so far, relegated mostly to Wildcat-like packages. That’s reportedly going to change in Week 12 after Hurts got reps with the first-team offense during the week. Maybe that helps the Eagles now and/or in the future, but it also runs the risk of exacerbating one of Wentz’s already rough 2020 traits.

The plays that could be summed up as Wentz trying to do too much are the result of a number of factors already described above. But if Wentz plays fewer snaps, it might increase the pressure to push the envelope even more frequently. How the raw total of mistakes adds up depends on how much Hurts really plays for Wentz, but the percentage of times Wentz overdoes it could go up.

Moves like incorporating Hurts more heavily into the offense often have unintended consequences, both good and bad. Maybe it’s just the thing that keeps Wentz a little less beat up and a little more ready to make plays. But it could also be the thing that sends Wentz tumbling further down a cliff that might be tough to climb back up.