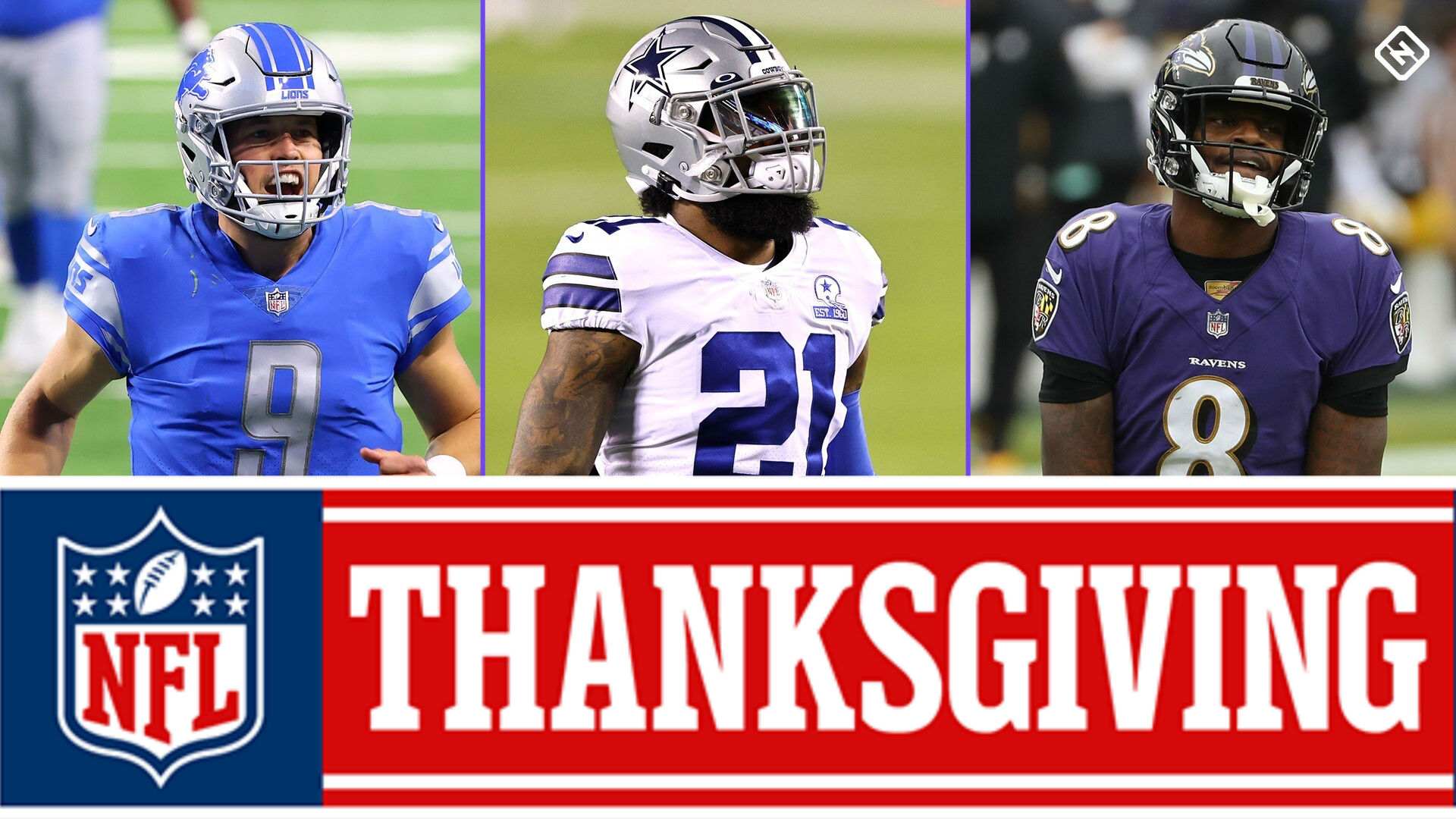 What NFL games are on Thanksgiving in 2020? TV schedule, times, channels for all three games Thanksgiving could be different for much of the United States in 2020, with gathering and travel restrictions potentially leading to a different celebration of the holiday. But even in this odd year, there’ll be a few constants: NFL football that includes the Cowboys and Lions.

It’ll be the 15th straight year that the NFL features three games on Thanksgiving. It all starts in Detroit, when the Lions host the Texans in a rematch of a 2012 overtime game on Thanksgiving. Then it’ll be the Cowboys playing host to the Washington Football Team. Proceedings conclude with an AFC North rivalry game on NBC when the Ravens travel to Pittsburgh to take on the Steelers.

The three networks currently in the Super Bowl rotation will split the Thanksgiving games up evenly, as usual. Lions-Texans will be broadcast on CBS with Tony Romo providing insight and entertainment. Then Cowboys-WFT will get Troy Aikman alongside Joe Buck on Fox, capped off with the “Sunday Night Football” crew on NBC for Ravens-Steelers.

Some might associate the Bears and Packers with playing on Thanksgiving, and they have a lot, ranking third and fourth in most games played on the holiday behind Dallas and Detroit. They won’t take part in this year’s festivities, though. The most-common Thanksgiving competitor outside the two stalwarts for this year is the Washington franchise, which will be playing in its 12th Thanksgiving game. The Steelers will play their ninth, the Ravens their third and the Texans their second.

Below is all you need to know about the teams playing on Thanksgiving this year, plus the TV channels for the games and more.

What teams are playing on Thanksgiving 2020?

The Lions line up for their 81st Thanksgiving game against one of the NFL’s most disappointing teams, the Texans. Houston fired head coach Bill O’Brien earlier this season after an 0-4 start and moved Romeo Crennel to the interim head coach position. Despite a young star at quarterback in Deshaun Watson, the Texans have yet to find their footing without DeAndre Hopkins. This will be the Texans’ second Thanksgiving game after they beat the Lions in overtime in 2012.

The Washington Football Team travels to Dallas for a matchup of two teams in football’s worst division, the NFC East. At this point, it seems more likely than not that the winner of that division will have a sub-.500 record. The Cowboys’ rough season was made worse when Dak Prescott suffered a season-ending ankle injury in Week 5, while Washington has worked its way through three starting quarterbacks (Dwayne Haskins, Kyle Allen and now Alex Smith).

The marquee matchup of Thanksgiving is the rivalry nightcap for sure, even though it’s not a traditional Thanksgiving matchup. Lamar Jackson has been held in check by Pittsburgh for the last two seasons, including in a loss earlier in 2020. For Baltimore to win, he’ll have to find running room and protect the ball from a Steelers defense that’s great at taking it back for Ben Roethlisberger.

What channel is Thanksgiving football on?

It’s safe to expect that CBS’ top broadcast team to do this game. That means Tony Romo and his approximately $1 million per game salary will do the color commentary alongside Jim Nantz. They’ll be joined by sideline reporter Tracy Wolfson.

Expect to see Fox’s No. 1 broadcast team on your televisions with the Cowboys playing on Thanksgiving. Play-by-play man Joe Buck will be joined by former Dallas quarterback Troy Aikman.

Fox has gone with two sideline reporters on its top team this season, with both Kristina Pink and Erin Andrews working that rule. Mike Pereira is the network’s rules analyst.

There’s no guessing game for NBC’s broadcast team, since it only has the one crew that you see each week on “Sunday Night Football.”

There hasn’t been a Thanksgiving since the turn of the century that didn’t feature the Detroit Lions and Dallas Cowboys.

The year 2020 will mark the 42nd consecutive year that the Cowboys have hosted a Thanksgiving game. But it’s the Lions who have the real streak going. They didn’t play on Thanksgiving from 1939 to 1944, but aside from that stretch, they’ve playing on Thanksgiving every year since 1934 (that’s 81 games and counting).

The Lions enter 2020 with a 37-41-2 record on Thanksgiving. Their tradition of playing on turkey day started the first year they were in Detroit, when owner George A. Richards decided it’d be a chance at some extra attention. It worked, and Detroit has been linked with Thanksgiving football ever since.

Wanting to boost interest was the reason the Cowboys first played on Thanksgiving, too, when general manager Tex Schramm got his team into Thanksgiving action in 1966. The Cowboys broke their then-attendence record that year, and they’ve since become known as “America’s Team.” The only years since then that Dallas hasn’t been involved in a Thanksgiving game were 1975 and 1977, when the NFL stepped in to try to boost the St. Louis Cardinals’ popularity by having them play on Thanksgiving instead.

What teams have never played on Thanksgiving?

The Jags have had a couple things working against them, not least of which is the fact that they joined as an expansion franchise in 1995. But Carolina also joined that year, and that hasn’t left them out of the holiday proceedings. Jacksonville’s lack of comptitiveness and its relative small-market nature compared to the NFL’s biggest cities surely haven’t helped its cause, either.

The Texans will break free from the list of teams currently knotted with just one Thanksgiving appearance when they play on Thanksgiving in 2020 against the Lions.

Below is a list of NFL teams in order by number of Thanksgiving game appearances (prior to 2020’s games).

Do people watch football on Thanksgiving?

While there’s no telling exactly how 2020’s CDC guidelines about limiting Thanksgiving traveling and gathering will affect football-watching, it’s traditional a time that plenty of eyeballs are watching the TV.

There’s been a lot made of lowered ratings among individual programs in 2020’s altered sports calendar, even though overall sports viewership is generally regarded to be up, according to Sports Media Watch. With their annual placement, the Thanksgiving NFL games will likely still see similar viewership, if not higher due to more people potentially staying in their homes.