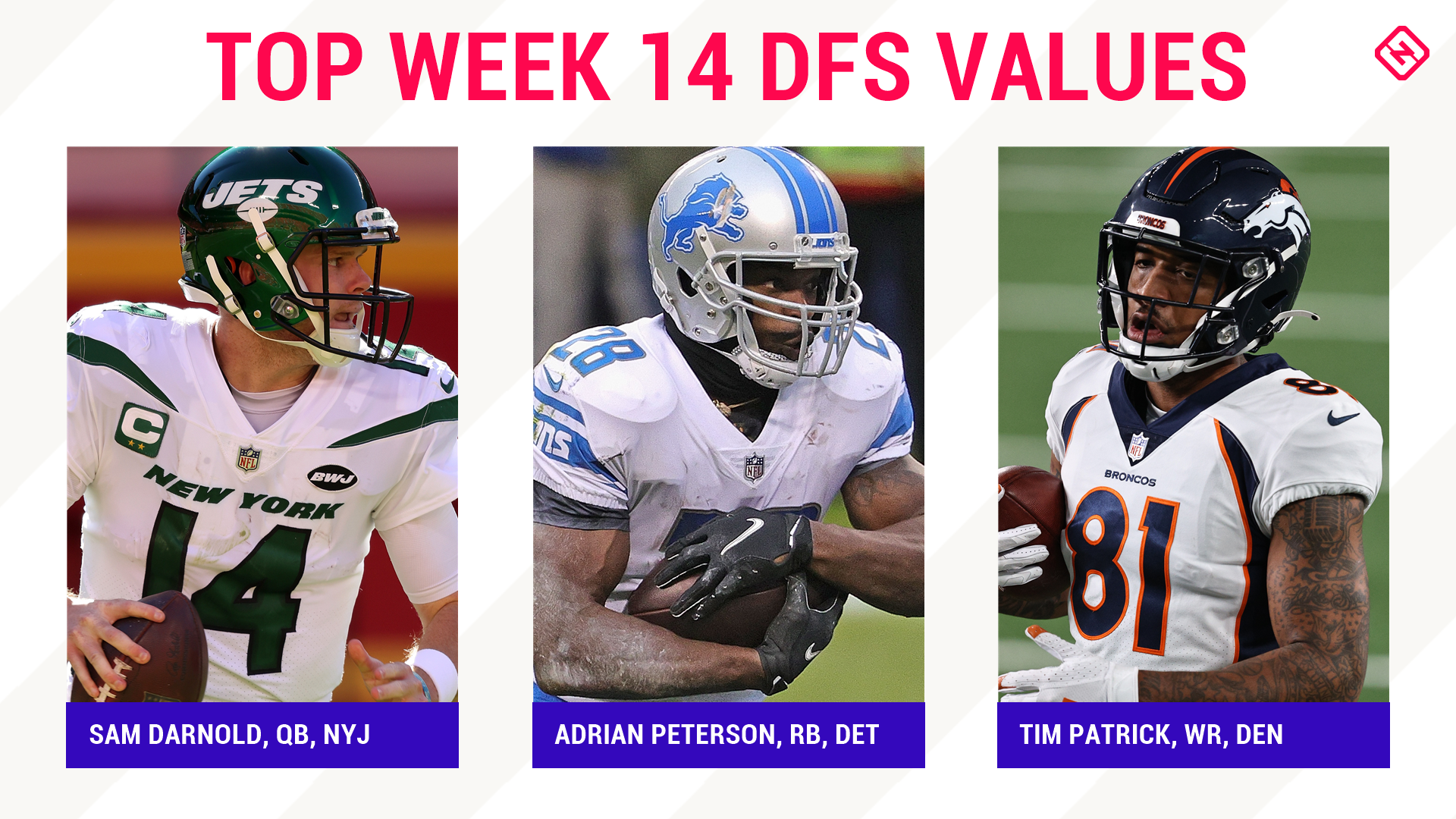 Amazingly, Week 14 of the 2020 NFL season has arrived, and the playoffs are about to begin in most season-long fantasy football leagues. Whether you made the big dance you’re cursing the fantasy Gods over Clyde Edwards-Helaire’s stomach bug, you will always have the ability to compete each week on trusty DFS sites like DraftKings, FanDuel, and Yahoo. But in order to prosper (and profit) in daily fantasy football, you must first master the art of pinpointing under-the-radar value plays and sleepers so that you can afford yourself studs at other roster spots.

Working 24/7, RotoQL provides detailed rankings of each NFL players’ DFS prices, values, stat projections, floors, and ceilings. I then compile a detailed list of our favorite under-the-radar value players, and we provide it to you free of charge via this column. If you checked in last week, you would have benefited greatly from our advice to make the following DFS roster picks (all Week 13 prices and fantasy points via DraftKings):

These players (and Seattle’s D) all vastly outperformed their price tiers, with some even leading their positions for the week. By finding such great values at modest costs, DFS managers afforded themselves studs like Dalvin Cook, Davante Adams, and Darren Waller in other roster spots.

You can read Week 14 previews and fantasy prediction articles 24/7 on BetQL, find out which side the pros are betting on their NFL expert picks dashboard, follow all the NFL public betting data, and build DraftKings lineups on RotoQL.

Let’s break down our top Week 14 DFS value plays, and you can get an idea of why 100,000 DFS players trust RotoQL to build lineups. We constantly monitor pricing and provide the most up-to-date insight and analysis to maximize your lineup success. Optimize, find value plays, and increase your chances of cashing today!

It’s a little bit higher of a price than we usually take for a “value” pick, but have you seen some of the names listed under $6,000? It’s enough to inspire a vintage grossed-out Macaulay Culkin face l ike in “Home Alone.” Tannehill, on the other hand, is like a large extra cheese pizza followed by an all-you-can-eat ice cream sundae bar. With the weapons at Tannehill’s disposal and the big steps forward he has taken as a decision maker, he might be a value in plus matchups at anywhere below $7,000 DK/$8,000 FD. The Jags are the fourth-most generous defense in fantasy to QBs, so drop the seven or eight Gs and yell “keep the change, ya filthy animals!” Hey, once a ’90s kid, always a ’90s kid, ya know?

Rivers has been absolutely balling out lately with at least 288 passing yards in each of Indy’s past four games. Expect this pass-heavy phase to continue, as the Colts have won three of their past four games. The eight-time Pro Bowler has seven total passing TDs over the past three weeks, during which he has averaged 20.14 fantasy points per game. Now he gets a Las Vegas defense that ranks in the bottom 10 in the league in fantasy points allowed to QBs. The father of nine may not be the sexiest DFS pick, but this week he might be the safest. RotoQL has Rivers projected at 17.9 points with a ceiling of 28.7.

Full disclosure: We tend to get a little more daring following weeks in which we knocked it out of the park with our picks. Case in point: I’m advocating for Trubisky for your DFS lineup. It may sound ludicrous, but Trubisky has actually been moving the chains a bit since retaking the reigns in Chi-town. He threw three touchdowns two weeks ago at Green Bay and had a 108.3 QB rating against Detroit last week. Trubisky still has a great rapport with top wideout Allen Robinson, and he will likely have to throw the ball between 35 and 50 times this weekend to try to keep up with Deshaun Watson. Houston’s secondary has often looked lost on the field, so we won’t blame you if you get risky for Trubisky.

As if things didn’t get weird enough with the Trubisky pick, here I am suggesting a QB who sees ghosts and plays for an 0-12 team. But Darnold has looked better lately, entrusting Jamison Crowder as his red-zone target and turning Denzel Mims into an intriguing rookie to invest in. And, hey, it’s Seattle! The Seahawks rank 31st this season against fantasy QBs.

The Bear you really need to play this week is Montgomery. This guy has performed admirably since Trubisky reclaimed the starting QB role, scoring 55.4 combined PPR points the past two games. The second-year back has silenced the critics, especially those who asserted he could not catch the ball out of the backfield like injured dual-threat Tarik Cohen. Montgomery ranks seventh amongst RBs with 39 receptions, and he’s missed just 11 targets (76.5-percent catch rate). He’s also averaging 4.1 yards per rush this season and scored five total touchdowns. He put up his first 100-yard rushing performance against the Packers two weeks ago and scored twice last week. He might combine those stat lines this week against the Texans, who rank second-to-last in rushing yards allowed and 26th in rushing TDs surrendered.

Indy coach Frank Reich must have reminded Taylor that he’s good a few weeks ago because he has reemerged out of obscurity to post back-to-back 90-yard rushing performances. He even scored a receiving touchdown last week, so apparently Rivers remembered the Colts’ second-round pick has hands as well as feet. The fun should continue in good ol’ Las Vegas this weekend, as the Raiders rank 28th in fantasy against RBs. RotoQL projects Taylor at 13 points with a 22.5 ceiling.

Gordon has enjoyed a terrific 2020 with the Broncos, but Denver coach Vic Fangio still stubbornly platoons him with Phillip Lindsay. Denver fans must have been frustrated to see Lindsay turn 14 rushing attempts into just 26 yards in last week’s loss to the Chiefs while Gordon had 131 yards on 15 carries. The Panthers rank 27th in fantasy against RBs, so Gordon should feast as long as Lindsay doesn’t hog half the carries (and snaps) again.

AP doesn’t care what jersey he wears or which coaches stay or go — he just rumbles between tackles and scores touchdowns. He seems like a volatile pick, but he’s had two rushing TDs and reached 17.5 fantasy points in two straight games and should continue to see a decent workload even if D’Andre Swift (concussion, illness) returns. Plus, he’s facing his former rivals, the Packers, a mediocre run D. Throughout his illustrious career, AP has averaged 5.14 yards per carry, 100.8 rushing yards per game, and a touchdown against Green Bay.

Consider this a double-down on Davis after our recommendation to grab him at $5,100 last week turned into a 38.2-point windfall, most among all WRs. He’s still modestly priced considering his upside against a Jaguars defense ranking 28th in fantasy against wide receivers. Tannehill basically lets stud running back open up the field and then hits either Davis or stud second-year receiver A.J. Brown in man-to-man coverage. In a lesser offense, Davis would probably be attracting double teams, but defenses must pick their poison with Tennessee.

Patrick deserves a lot of credit for soldiering through a season of shoddy quarterback play. He has now finished with double-digit PPR points in seven of the nine games he’s played this season (and let’s not hold the week Kendall Hinton started at QB against him). He caught two touchdown passes from QB Drew Lock last week against the Chiefs, further evidence of the rapport he has with the second-year signal-caller. The Panthers allowed Minnesota QB Kirk Cousins to rack up 307 passing yards and three touchdowns in their game before their bye, and Tom Brady hung 341 yards and three scores on them three weeks ago. The points should be flowing and the targets should be plentiful for Patrick, especially if Christian McCaffrey (shoulder) returns to spark the Panthers offense.

If you want a safer floor, spend $1,300 more and grab top Jets red-zone target Jamison Crowder, but if you want a cheap opportunity for a potential boom play, go with Mims. Both Joe Flacco and Sam Darnold have showered the talented rookie with targets since he got fully healthy, and it’s translated to three double-digit PPR performances in the past four weeks. He’s a good route-runner and a big yards-after-the-catch guy, and he pulled in a two-point conversion grab last week against the Raiders. He seems like a prime candidate for positive touchdown regression (he has none), so Mims might be worth the $4,100 flyer against a Seahawks team ranking last in fantasy points allowed to receivers.

It may not matter who throws the ball for Cincinnati this weekend. Boyd can still make game-changing plays whenever he touches the ball, and the Cowboys still utterly stink at defending wideouts. Don’t be surprised to see an encore performance of Boyd’s 72-yard catch-and-run last Sunday against the Dolphins.

Gesicki made one of the top plays of Week 12, a leaping and fully-outstretched one-handed catch in full stride for 20 yards. Go watch it, seriously. The 6-6, 250-pound third-year man caught nine-of-11 targets for 88 yards in the win over Cincinnati, and he scored a touchdown for the second consecutive week (good for 23.8 PPR points). At $4,200, you should jump at the opportunity to grab the second-best receiver on an 8-4 team, especially at the shallow tight end position. The Chiefs rank 26th in fantasy points allowed to TEs, so Gesicki has the talent to put up double-digit fantasy points this week.

Picking sleeper tight ends each week is like drunkenly throwing darts. Beyond Travis Kelce and Darren Waller, it’s basically a crapshoot position, but I’m willing to make an educated guess that Fant will finally break free for a big one this weekend. He’s finally healthy, and he has Drew Lock back under center after Denver’s COVID-19-induced hysteria in Week 12. Fant gets to visit sunny Carolina and face a generous Carolina defense. Since Week 7, the Panthers have allowed opponents’ top tight ends to catch a total of 31-of-41 targets for 432 yards and two TDs.

Reed has had another injury-ravaged season, but he and Nick Mullens connected for a score in San Francisco’s loss to the Bills on Monday. Washington has been solid against wide receivers this season but susceptible to talented tight ends. Reed might find paydirt for the second straight week.

BetQL, RotoQL’s sister product, simplifies the research process for sports bettors by equipping them with real-time line movements, value bets of the day and meaningful team trends. Check it out here!

Washington’s defense has been terrific all season, but DFS sites seem to think it’s a mirage. I don’t. The Football Team with no name spoiled Pittsburgh’s bid for perfection Monday in one of the biggest upsets of the season. Jack Del Rio’s squad allowed the Steelers just 21 total rushing yards, and WFT has now allowed an average of 50.3 yards on the ground in its past three games. San Francisco’s offense relies heavily on its running game, and the 49ers have committed at least two turnovers in every game since Week 7. If Washington can stifle Big Ben, they can definitely do a number on Nick Mullens.