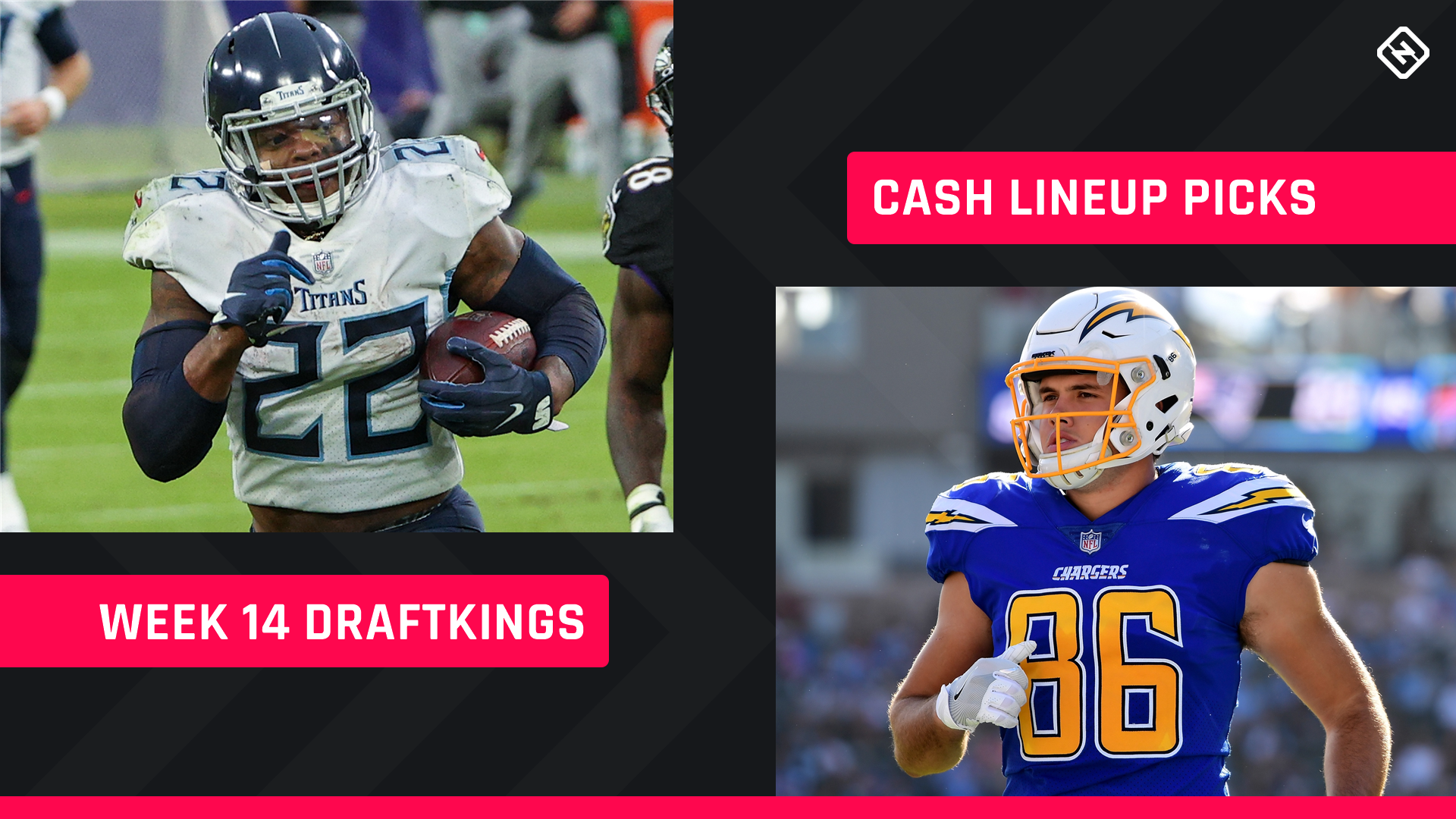 This is the week that NFL DFS players have been waiting for. No byes, no game postponements (yet), and 13 teams available on the Sunday slate. That will give everyone a plethora of lineup options, which is really beneficial for daily fantasy football cash lineups. There will be plenty of ways to differentiate your lineup no matter how you like to construct your roster. Our Week 14 DraftKings cash lineup will go with the strategy of spending up at RB and targeting some potential-packed value receivers to carry our lineup to victory.

Because of the strong slate, there are a lot of top-tier RBs available, several of which have excellent matchups. A couple really stood out, so we decided to spend up for them. Because both were at least $7,700, that meant spending down at WR and flex, but that was easy to do thanks to the WR value. We were able to get four worthwhile WRs that all cost between $4,200 and $5,300. We also went with a QB-WR-TE stack and targeted a couple of sleepers that should get us over the cash line for another week of action.

QB Justin Herbert, Chargers vs. Falcons ($6,800). Herbert just had his worst performance of the year against a Patriots defense that was ready to rattle the rookie. He won’t have as much trouble against the Falcons. Atlanta has allowed the most DraftKings points to QBs this season, including a league-high 30 total TDs. Herbert has posted multiple TDs in seven of his past nine games and at least three TDs in six of those nine games. His floor is usually sky high, so we’ll count on him to bounce back in a favorable matchup.

RB Derrick Henry, Titans @ Jaguars ($8,700). Henry has had at least 15.2 DK points in all but three games this year. One came last week, one came against the Bears, and one surprisingly came early in the season against the Jaguars. Henry is averaging a league-high 22.6 carries and 109.8 rushing yards per game this season, and considering that the Jaguars are allowing the fourth-most DK points to RBs this season, Henry should be in for a big day. He’s a great play in cash-game formats because of his solid ceiling and sky-high touch floor.

RB Aaron Jones, Packers @ Lions ($7,600). Jones has logged double-digit DK points in every game he has played this year and is averaging just under 20 DK points per week. The last time Jones played the Lions, he racked up a whopping 48.6 DK points thanks to a 236-yard, three-TD outing. The Lions have allowed 23 TDs to RBs this season, which is far and away the most in the NFL, so going with Jones in this extremely favorable matchup is a no-brainer.

WR DJ Chark, Jaguars vs. Titans ($5,300). Because we’re spending up at RB and QB, we have to spend down a bit at WR. That’s not a problem though, as there are a lot of worthwhile No. 1 options available at low prices. Chark has been up-and-down this season amid some injury issues, but he can be trusted against the Titans. Tennessee has allowed the fourth-most DK points to WRs, and it just got gashed by Jarvis Landry, Rashard Higgins, and Donovan Peoples-Jones. Chark has averaged 8.8 targets in his past six games and has seen no fewer than five in each contest. All he needs is a big play to pay off, and playing him and Derrick Henry together could be a big positive if that game script goes the right way.

WR T.Y. Hilton, Colts @ Raiders ($5,100). All of a sudden, Hilton and Philip Rivers are starting to show a solid rapport. That makes Hilton a nice play in the low-$5K range. In his past two games, Hilton has averaged eight targets, six catches, 95.5 yards, and a TD for the Colts. He has done it against the Titans and Texans secondaries, both of which have issues, but the Raiders do, too. They have allowed slightly more DK points than the average team this season but just had trouble containing the Jets offense. Hilton could have a nice day as a result, and at this bargain-bin price, we’ll bank on him ripping off more yards or finding the end zone (or better yet, both).

WR Mike Williams, Chargers vs. Falcons ($4,700). We wanted to stack a player with Herbert, and while Keenan Allen is the safer pick, he’s too expensive to fit in this lineup. Instead, we went with Williams, who is averaging 6.8 targets, 3.8 catches, and 59.8 yards in his past six games. He’s a big downfield playmaker and has TD upside, so trusting him against a Falcons defense that has given up the second-most receiving yards (2,493) and second-most DK points on the year is a great option. He’s a potential boom pick but still has a high floor.

TE Hunter Henry, Chargers vs. Falcons ($4,400). That’s right. We’re double-stacking Chargers and stacking Hunter Henry with another Henry (Derrick). Hunter had come on of late before a dud outing against the Patriots, but even still, he’s averaging 6.3 targets, four catches, and 40 yards during his past three games to go along with two TDs. The Falcons have given up the sixth-most DK points to TEs this year, so this could be a good spot for Henry to wash the taste of last week’s one-catch, five-yard performance out of his mouth.

FLEX Tim Patrick, Broncos @ Panthers ($4,200). You will be hard-pressed to find a better low-budget option than Patrick for cash games. Since Week 3, Patrick has logged double-digit DK points in seven of the nine games he has played. One of the outings he didn’t reach double figures came when Kendall Hinton started at QB and the Broncos completed just one pass. Patrick has been pretty consistent this year, yet is priced more for his lack of top-caliber ceiling as opposed to his high-end floor. He’s a perfect cash-game pick and should do just fine against a Panthers defense that is middle-of-the-pack against WRs.

D/ST Seattle Seahawks vs. Jets ($3,000). The Jets offense looked good against the Raiders, but does justify the Seahawks being the just sixth-highest priced defense on the slate? No. The Seahawks have been better on defense recently, and though they did just lose to the Giants, their defense surrendered just 17 points and managed to force an interception and a key safety during the game. The Seahawks stop unit is full of playmakers, and Jamal Adams, the best of those players, should be ready for a big game in this revenge spot. We’ll trust the Seahawks to round out a safe and solid lineup.