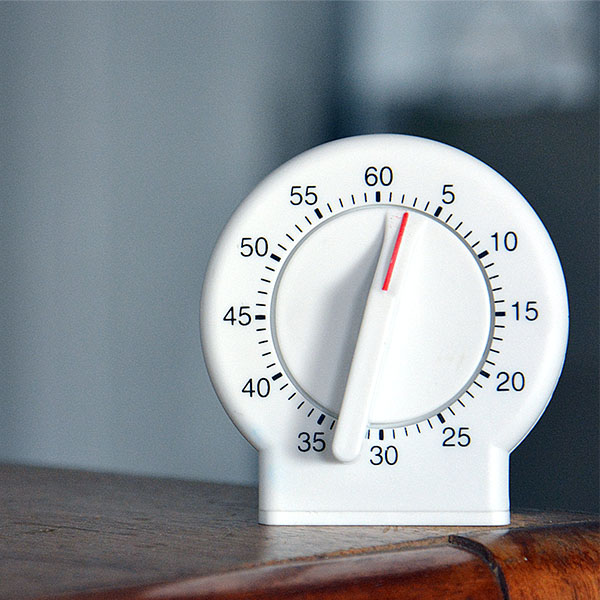 
Procrastination is a widespread and serious issue amongst students, with research estimating that between 80% and 95% of students procrastinate.

Students procrastinate for many different reasons, so it is unlikely that one solution would suit all stations. But what if there was a simple technique that you could teach your students to that may help a lot of them reduce how much they procrastinate? Well, that’s where the three-minute “rule” comes in…

What is the three-minute rule?

The three-minute rule is a strategy that claims to help students overcome the urge to procrastinate. Essentially, it states that if a student is in danger of putting off a task, they should try doing it for just three minutes.

So, why does it work? Well, even if the task is incomplete after 3 minutes, beginning a task that they have been avoiding will make the student feel less intimidated to complete it. The hope is that the 3 minutes will quickly turn into 10 minutes, and then to 30, and eventually, the task will be complete. This way, instead of focusing on how much they are dreading a task, students can focus on the “doing” part of the task.

What does the research say?

We know that students procrastinate, but why do they do it?

Well, one common reason that students give is that they don’t have enough time to complete the task. However, research has pointed out that this might not be the case.

What might actually be happening is that students are not managing their time correctly. Studies show that around 70% of students finish their assignments later than they thought they would. This is known as The Planning Fallacy.

Using the three-minute rule might help solve this problem: forcing themselves to start a task that they would have otherwise left to the last minute will give students more time to complete it. Starting the task earlier would allow students to get a better understanding of what exactly the task requires so that they can plan better.

So, what if students do stop working on the task after 3 minutes? Well, not only is this not a problem, it may actually be a good thing. In one study, participants were given 12 problems. If they didn’t manage to solve each problem within one minute, participants were given the solutions to the problems. Researchers found that participants remembered incomplete problems better than the problems that they managed to solve. This is known at The Zeigarnik Effect, which is the tendency to remember information from incomplete tasks better than information form tasks which have already been completed.

How can you apply this to your classroom?

By completing short tasks immediately, students will not have the time to think about how much they don’t want to do the task, and instead focus their energy on getting it done. This will ensure that your students do not procrastinate on tasks that require little time or effort.

One big reason that students procrastinate is because big tasks may seem too difficult. Encouraging your students to commit three minutes to just starting an intimidating task can really help your students avoid putting off long tasks until the last minute and break it up into shorter efforts.

When your students are given a finite amount of time to complete a problem before they receive the solution, one of two things will happen. Either they will demonstrate that they understand the content by solving the problem correctly, or they will leave the problem incomplete and remember that information better next time. It’s a win-win. Just make sure to assure your students that you are not testing them so that they do not associate the timed conditions with high-stakes testing.

Overall, the three-minute “rule” could be very helpful to help students avoid procrastinating both big and small tasks. We would be remiss not to add that specific research looking into this exact “rule” is somewhat absent. This makes us think it may be a good general principle, as opposed to a set research-based principle.

The general philosophy behind it makes sense. Starting a task is half the battle. And once you start it, it seems less daunting and/or gives you an idea of how much time you may need to allocate it.