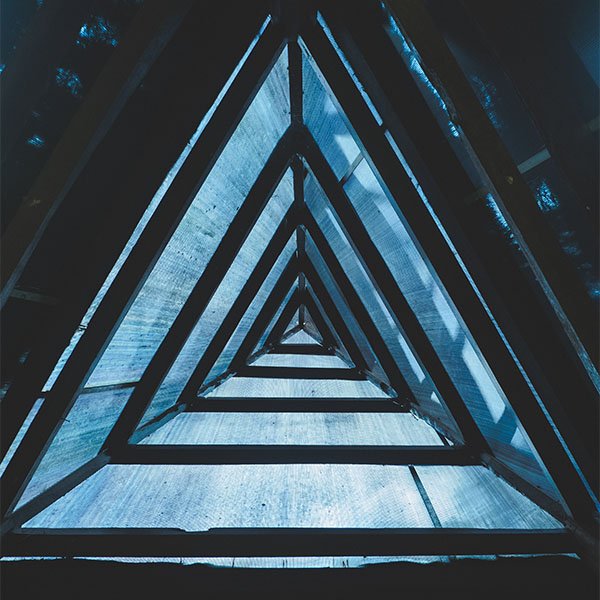 the problem with Bloom, Dale and Maslow


Out of all the education graphics that exist, none has gripped the imagination and attention of educators more than the pyramid.

Be it Bloom’s Taxonomy, Dale’s Cone of Learning or Maslow’s Hierarchy of Needs, it seems that pyramids are the predominant concept. But is their place in education justified? Are they accurate? And do they potentially do more harm than good?

What is Bloom’s Taxonomy?

Bloom’s Taxonomy was first published in the mid 1950s and went on to become a staple part of initial teacher training for many years, despite its many issues and flaws. It was designed with the intention of helping develop students “higher-order” thinking skills and as a way to design and assess learning outcomes. 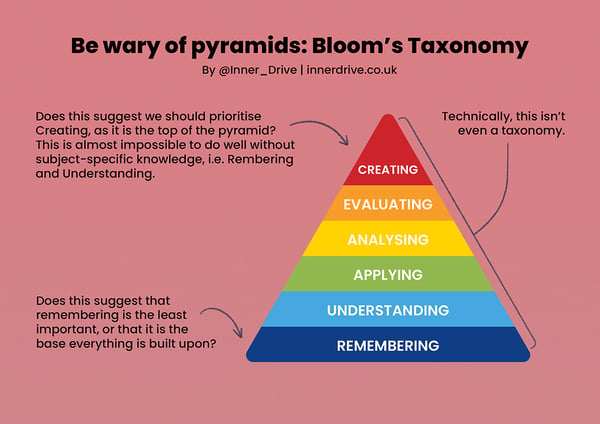 What’s the problem with Bloom’s Taxonomy?

Bloom’s Taxonomy places “remembering” significantly lower down than “evaluating” or “creating”. This has led to many interpreting the latter two being more important and of higher value than the former.

But this is a false dichotomy, as remembering, or essentially having large amounts domain-specific knowledge, makes high quality evaluating and creating possible. Even the best “evaluator” among your students would struggle to compare and contrast the similarities and differences between the deaths of Ophelia and Juliette without knowing the details and context of William Shakespeare’s plays.

Furthermore, when you take it to its natural conclusion, the downgrading of knowledge in favour of skills becomes incredibly problematic. This culminates in favouring a more discovery-based and inquiry-learning approach – in theory, this would allow to spend more time practising these higher-order skills.

Unfortunately, research suggests that this approach is not beneficial for novices, who do not have a rich schema in place to help them mentally connect these dots. As a result, it places a heavy toll on their working memory, which can hinder the transfer of information to their long-term memory. This can lead to a cognitive overload, which ultimately increases stress and reduces learning.

Finally, it is interesting to note that it isn’t technically a taxonomy, which is the scientific classification of things. In the 60+ years Bloom’s “Taxonomy” has existed, methodical research on cognitive science and learning has come on leaps and bounds, and it does not support the idea that the different levels described are separate and isolated. Instead, they interlink and work in tandem to support one another.

What is Dale’s Cone of Learning?

Dale’s Cone of Learning, initially called the Cone of Experience, aimed to inform teachers of how much their students would remember depending on how they presented information to them. 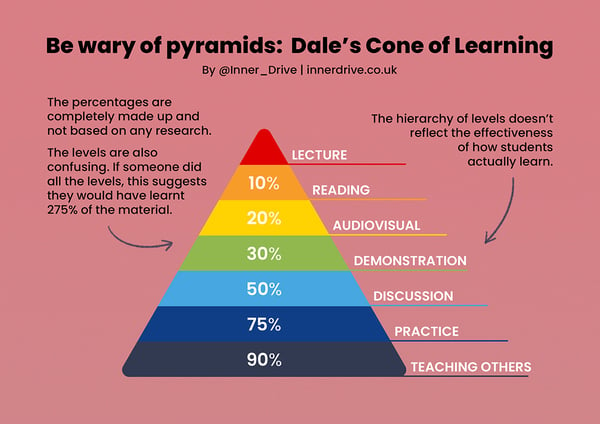 What’s the problem with Dale’s Cone of Learning?

Dale’s Cone of Learning is arguably one of, if not the most shared education graphic. For many years, it was displayed without objection or critique, in a sort of Bandwagon Effect that assumed its popularity meant accuracy. Sadly, this is simply not the case.

As with all edu-myths, Dale’s Cone is a bit like the Magic Eye posters that were popular in the early 90s: if you squint and try really hard, you can probably find something in it. For example, some research did find support for teaching others as an effective technique (known as the Protégé Effect).

Sadly though, the truth is that there is no evidence to support the figures often associated with Dale’s Cone. Rather tellingly, Dale did not include any numbers in his original graphic (these were added some years later by a Mobil Oil company employee in a non peer-reviewed journal).

The first clue is that those numbers are too neat. A sceptic would point out that you should always be cautious of round numbers, as research (especially into something as complex and messy as student learning) doesn’t lend itself to clean-cut, well-rounded numbers.

Additionally, pyramids are sequential – one would expect that to get to the next level, you have to complete the previous one. This is clearly not the case for Dale’s Cone, as to complete it would amount to learning 275% of a piece of information.

The final criticism of this graphic tends to be true of most pyramid-shaped graphics in education. They are confusing as they send mixed messages. On one hand, the base of the pyramid makes it sound like it is the foundation that all other areas are built on. On the other hand, the top of the pyramid is often viewed as the pinnacle. All in all, it’s probably fair to say that the sooner Dale’s Cone of Learning is left in the past, much like those Magic Eye posters, the better.

What is Maslow’s Hierarchy of Needs?

Maslow’s Hierarchy of Needs has by and large stood the test of time. It was first released during World War II and sought to explore the direction one goes through for personal development. Essentially, it suggests that one’s physiological and primary needs must be met before one can meet the “higher-order” psychological needs. 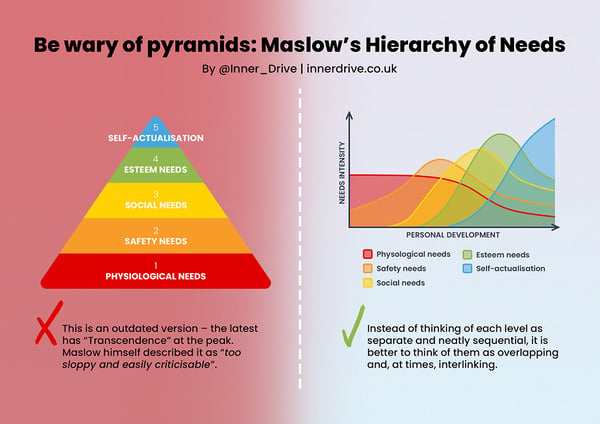 What’s the problem with Maslow’s Hierarchy of Needs?

Sounds logical, right? Well, all is not rosy in the Maslow garden. Many other researchers have since commented that it is probably more accurate to think of each level as overlapping and at times interlinking instead of separate and perfectly sequential. Like most pyramid-shaped graphics, it may be more complex than the simplistic presentation may suggest.

A lesser-known fact about the Hierarchy of Needs to be aware of is that a more detailed update published just before Maslow’s death exists. It includes additional layers, one of which places “Transcendence” at the peak instead of “Self-Actualisation”.

It has been reported that Maslow felt his original model was “too sloppy and too easily criticisable” and that he “meant to write and publish a self-actualization critique, but somehow never did.” Transcendence includes helping others develop their potential, whereas Self-Actualisation tends to focus more on realising one’s own individual potential.

Overall, this model certainly isn’t perfect. It has its flaws and weaknesses and, like all pyramid models, is too neat to be considered true. That being said, it is worth knowing about – it does provide a strong platform to help initially understand a range of areas such as intrinsic motivation, psychological safety and attachment in students.

Illustrations have the ability to illuminate and explain complex systems and ideas. However, they should always be viewed with scrutiny, especially if they either suggest a clear hierarchy or present suspiciously neat and round numbers as fact.

Hopefully this blog goes some way to help paint a clearer picture.