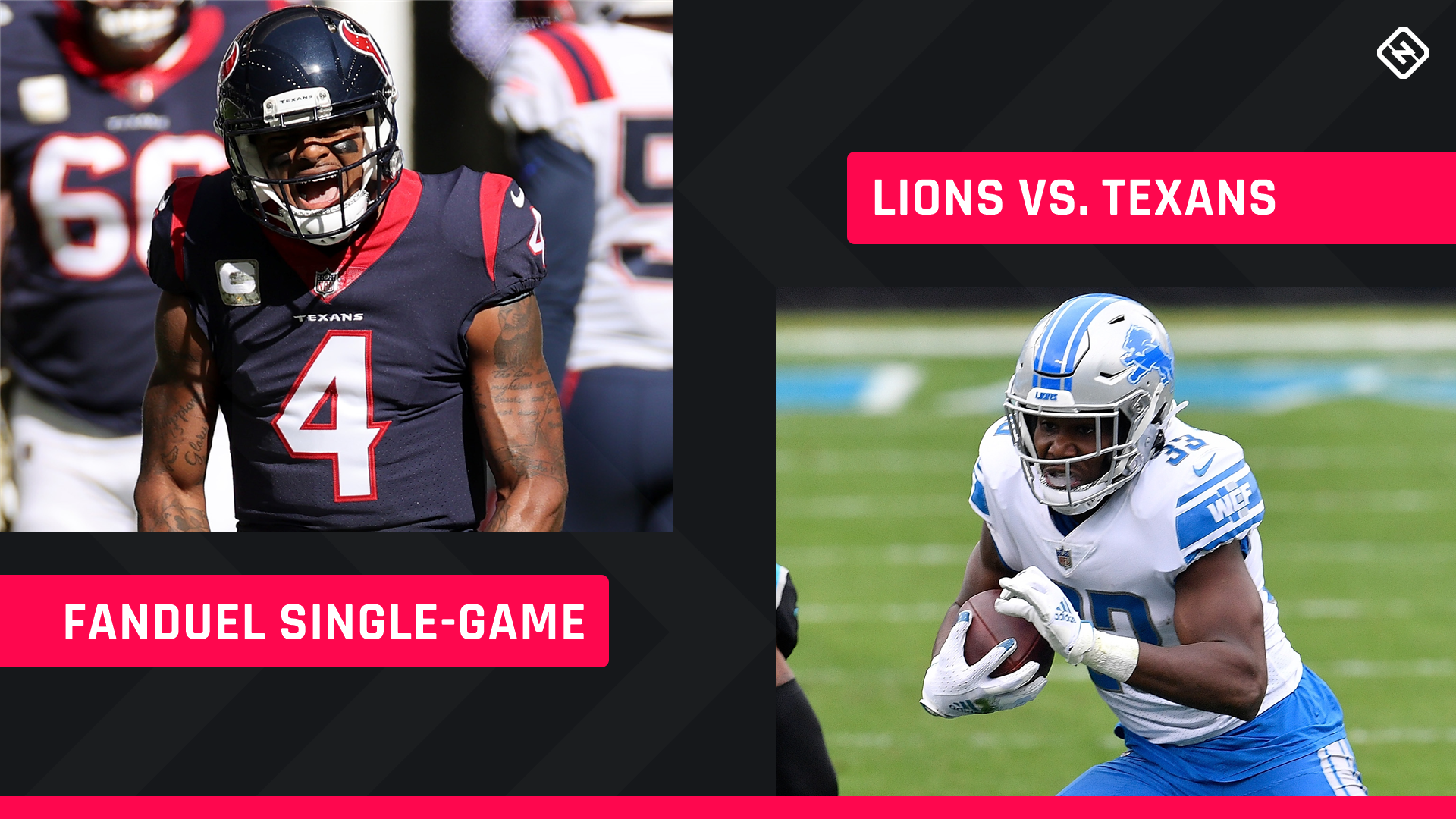 The Texans and Lions are squaring off in a Thanksgiving matchup that should feature quite a lot of yards and points. Neither the Lions nor the Texans have very good defenses this year, and each offense should find ways to move the ball. NFL DFS players looking to play a Thursday FanDuel Single-game lineup should be licking their chops at the potential lineup combinations, as there are plenty of sleepers and value plays to trust.

We’re taking a Texans-heavy approach in this lineup. The Lions simply have too many top contributors dealing with injuries, including Matthew Stafford (thumb), D’Andre Swift (concussion), and Kenny Golladay (hip). Meanwhile, the Texans offense has been performing well in recent weeks and should find ways to beat the Lions defense. That said, we are fading the Texans running game despite a great matchup. Duke Johnson hasn’t done well in place of David Johnson (concussion), so we’ll focus more on their passing game and hope that being contrarian in that aspect of our lineup pays off.

MORE FD SINGLE-GAME: How to win a Single-game contest

Since Week 3, Watson is averaging 294.4 passing yards, 28.1 rushing yards, and 2.4 total TDs per game. He has been a rock-solid contributor and has posted at least 24 FanDuel points in five of his past six games. The Lions are worse on the ground than they are through the air, but Watson should still be able to pass plenty on the Lions after putting up 31.36 FD point against a Patriots defense that had previously been one of the best against QBs on the year. Watson is the safest option here, and while he may be the highest-owned MVP, he’s worth it in this matchup.

Since getting zero targets in Week 2, Fuller has averaged 7.3 targets per game for 74.5 yards. He also had a six-game TD streak in that span and has been the top receiver for the Texans. Fuller’s consistency — he has double-digit FanDuel points in all but two games this year — should make him a solid target in this matchup. The Lions have allowed 146 catches to receivers, good for the sixth most across the NFL, so Fuller should have a chance to reel in quite a few passes and could rip off another big chunk gain or find the end zone once again.

We’re stacking Watson with his two top weapons to give this lineup a lot of double-point opportunities. Cooks started the season slowly but has been on a tear since. He has averaged 14.35 FanDuel points over his past six games and in that span, he has averaged a whopping 8.7 targets per game. Cooks’ floor is lower than that of Fuller, but his ceiling is just as high. If both go off in this matchup, this lineup should cash regardless of what the lower-priced plays do.

With D’Andre Swift (concussion) unlikely to play in this game, Adrian Peterson and Johnson are slated to be the top backs for the Lions. The Texans have one of the worst run defenses in the NFL, allowing a league-high 1,458 rushing yards to the RB position. Peterson is just $500 more than Johnson, but Johnson’s upside is greater considering that he is a better receiving back and saw five targets last week. The Lions should feed both backs early and often, but Johnson is the better play since he’s lower priced, has higher upside, and could easily emerge as the top back for Detroit, at least in this contest.

Against the Patriots in Week 11, the Texans lost Randall Cobb (toe) and Kenny Stills (quad) to injuries. Cobb is out long-term while Stills is questionable for Thursday’s game. Because of these injuries, Coutee could see a bigger role for the Texans out of the slot. He saw four targets and caught a TD against the Patriots while playing 57 percent of the team’s snaps last week. You could argue that TE Jordan Akins ($6,500) could be a nice option here, too, but given that the Texans will have only four WRs on the active roster if Stills is out, you can expect Coutee to have a sizeable role in the offense. Combining that with the option for double points and lower ownership is huge for this lineup.