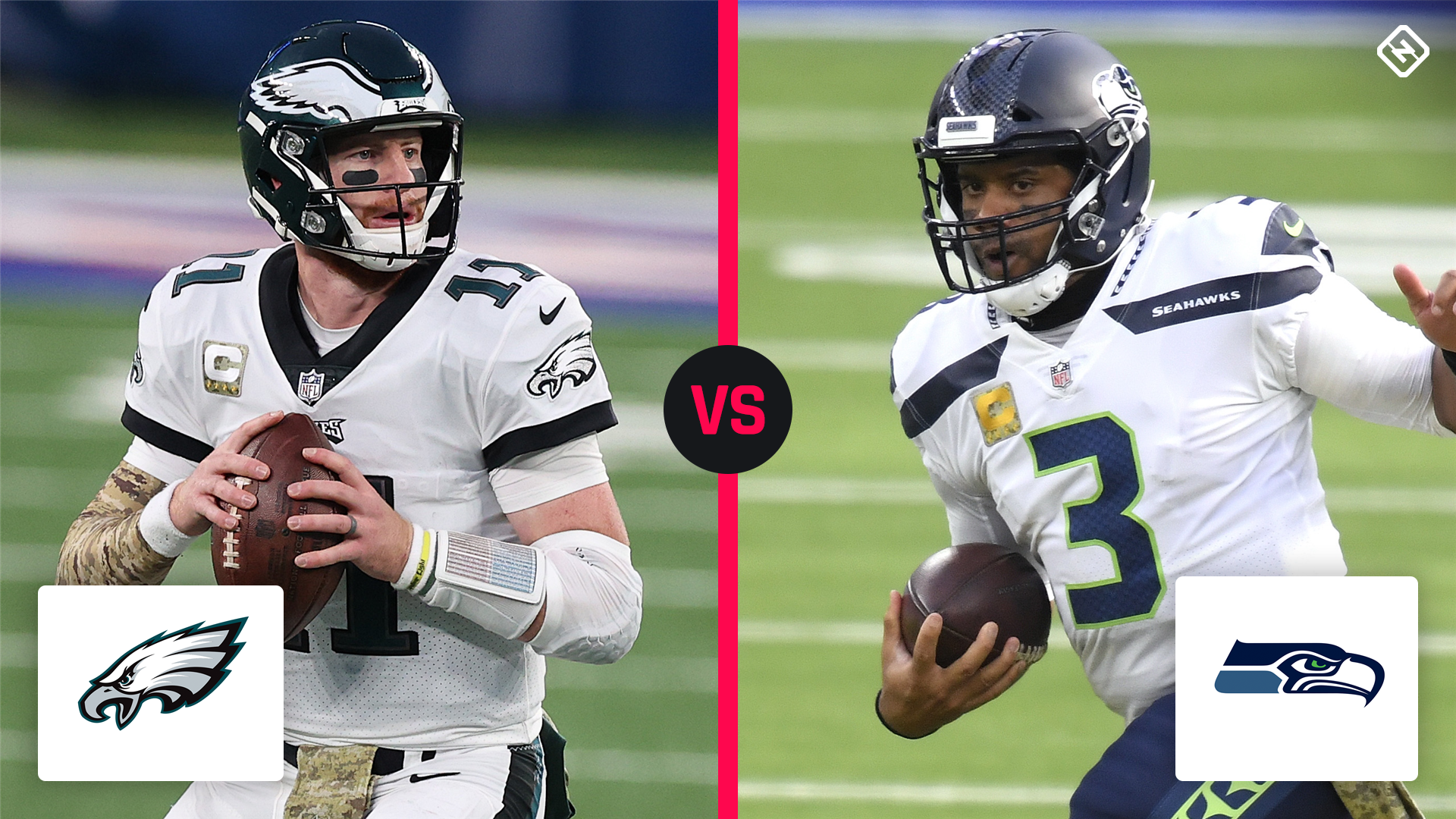 When the Seahawks (7-3) travel to Philadelphia to face the Eagles (3-6-1) in the penultimate game of NFL Week 12 on “Monday Night Football” (8:15 p.m. ET, NBC) it will be about two teams trying to stay in first place. The Seahawks need a win to remain atop the NFC West after both the Rams and Cardinals lost. The Eagles, who have seen both Washington and the Giants go into the lead in the NFC East, will look to avoid being stuck in third place.

Russell Wilson has seen his MVP campaign fade as he’s up to 10 interceptions for the Seahawks. Carson Wentz leads the league with with 14 interceptions for the Eagles. Wilson is still playing at a high level to justify his mega contract, while Wentz has failed to live up to his team’s investment in him.

The Seahawks still have the worst pass defense in the NFL but showed some improvements in Week 11 in a much-needed win over the Cardinals. The Eagles are coming off two bad losses to the Giants and Browns after their Week 9 bye.

Here’s everything to know about betting on Seahawks vs. Eagles in Week 12, including updated odds, trends and our prediction for “Monday Night Football.”

The Eagles have been just under touchdown home underdogs since early in the week. The Seahawks are getting healthier everywhere to be better for Pete Carroll, while the Eagles tend to get hot during the coldest, latest time of the year under Doug Pederson. The total is set up more by the Eagles’ defensive strengths and their offensive deficiencies.

The Seahawks have gone 11-7 in their 18 meetings. Seattle won 17-9 at Philadelphia twice last season, both in the regular season and in the playoffs. The Seahawks have won six consecutive games against the Eagles going back to 2011 and also eight of nine meetings. The Eagles last won in Seattle in 2006. The Eagles haven’t beaten the Seahawks at home since 1989.

— 59 percent of bettors are with the Seahawks to cover the spread and win by a touchdown and extra point or more.

— 56 percent of bettors think the total is too high and see the game going under with the implied scoring to be even lower than expected.

The Seahawks will get their workhorse back in the lineup again after his latest injury to his foot. They ran the ball well last week against the Cardinals with Carlos Hyde doing some tough power running. Carson is a better runner and also gives Seattle more in the passing game. The Eagles have dropped to No. 26 against the run, so there’s no question the Seahawks will try to get him going to take pressure off Wilson and the defense.

The Eagles have leaked that Hurts, Wentz’s rookie second-round backup, will see more snaps as a traditional quarterback spelling Wentz. There’s uncertainty on how much Hurts will actually plays, but the bottom line is, the Eagles need better QB play to exploit a defense that is No. 4 against the run and dead last against the pass. Wentz, when in there, needs to have a great game to lift his team and himself out of a slump.

Who will win up front?

The Eagles’ strength defensively is their front four. As an entire unit, Philadelphia has 34 sacks going into the game, good for No.  3 in the league behind the Steelers and Washington. The Seahawks have given up 33 sacks of Wilson, the fourth highest-total in the NFL.

The Eagles, meanwhile, with their offensive line injuries and Wentz’s woes, have given up a league-high 40 sacks. The Seahawks are up to 25 sacks defensively, No. 13 in the league, after a good performance against the Cardinals at home. Whoever can consistently apply more pressure will win the game.

75.4 and 6. That’s the passer rating Wilson had in the 2019 regular-season meeting and the sacks he took. The Eagles struggled a lot more against him in the playoff rematch. They need to play defense at that level to have a chance again, but it starts with stopping the run and limiting his big plays with the pass rush/secondary combination.

The Eagles are desperate. The Seahawks haven’t been the same team on the road, going 2-3 vs. 5-0 at home. The Eagles’ defense will rise to keep them in the gam and contain Wilson, until the offense can get going better in a favorable matchup for their passing game. Wentz and Pederson show their December mojo a day early as Philadelphia gets back on track to win the NFC East.