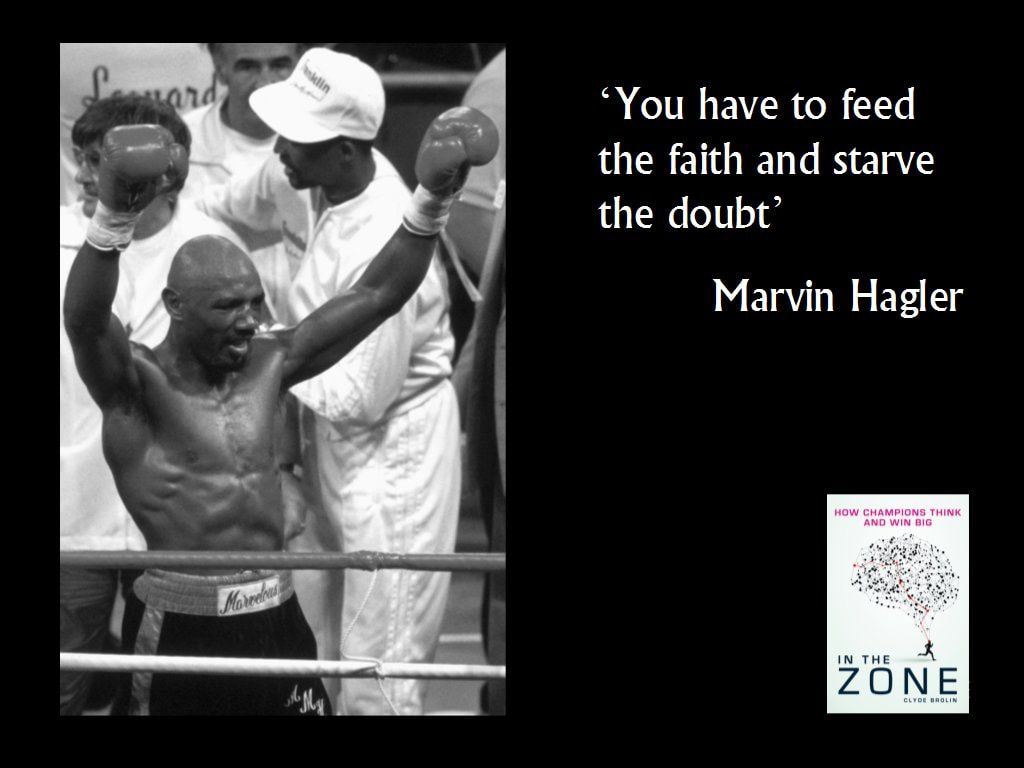 The loss of boxing legend Marvin Hagler has capped off a sad weekend for sports lovers.

It was a huge privilege to meet the great man several times, most recently a year ago at the Laureus World Sports Awards in Berlin, where I gave him a copy of In The Zone to thank him for the interview he gave me for the book. I couldn’t resist grabbing the chance to have another short chat, and I’m so glad I did. Thank you Champ. Here is what he told me…

How powerful is failure on the route to success?
I don’t think you think about failure. What you do is you feed the faith and you starve the doubt. That’s how you don’t fail. If you feel as though you are a winner, you are a winner. Nobody likes the fact of losing but sometimes by losing it can help you grow. The thing is that you have to learn from your mistakes. If you don’t make mistakes you’re not going to learn.

A lot of people feel that they fail a lot more than they succeed in life, I’m one of them…
You’ve got to realise one thing: it’s never too late. That’s what life is all about. You have another opportunity and it’s what you make of it. Life is what you make of it. That’s basically what I try to do every day.

Have you taken the attitude you had as a boxer to everything you’ve done since?
My boxing has been my best education in the world. I learned from my mistakes. A lot of times we make mistakes but one thing you don’t want to do is make a mistake in that ring… In boxing if you get knocked down, you’re going to have to get straight back up or you’re going to have to start all over again. Sometimes it’s a long road coming back.

On the way up, before turned pro, did you ever allow doubts into your mind?
I don’t think so. Again, you have to starve the doubt and feed the faith. I learned that young. But what helps is when you’ve got people like your family surrounding you who help and support you. Then when you feel down, family can help build you back up before you really hurt yourself or have any doubts about yourself. Family plays a really big part in growing up.

Did you have any specific mentor that helped you along the way?
I had my manager and trainer. They have both passed away but I think about them a lot. They were the ones who guided me in the right direction. That’s basically where you want to keep it. They’re the ones who really gave me the strength to keep going and be the person I am – because they gave me the faith.

And have you since passed on that faith to others?
Yes, this is the reason I’m here at Laureus right now. Because of all the things that I learned at the early part of my career, what you want to do is to be able to return something to someone else and see them grow in the right direction. So they are not living in fear but giving them hope, and saying that if I made it, you can make it too. What does it take? It takes hard work. It’s giving something back to the young kids – and hopefully one day you’re going to see them grow up.

When you give like that, does that give you something back too?
It does. It makes you feel good. I’ve given to a lot of kids – just a bit of a boxing lesson or something. What is a great feeling is if you see the kid again in the future. You never know if you will see them again but if you do bump into them and they say: ‘Do you remember me?’ And I say: ‘No, who are you, kid?’ And they say: ‘Well, you showed me a couple of punches. I used that – and you know what’s happening now? I’m getting ready to go for the Olympics.’ I say: ‘No…’ and they say: ‘Yes it was thanks to you. You really gave me that inspiration.’ That’s what makes me feel proud.

If you can get one kid off the streets, it’s a blessing…