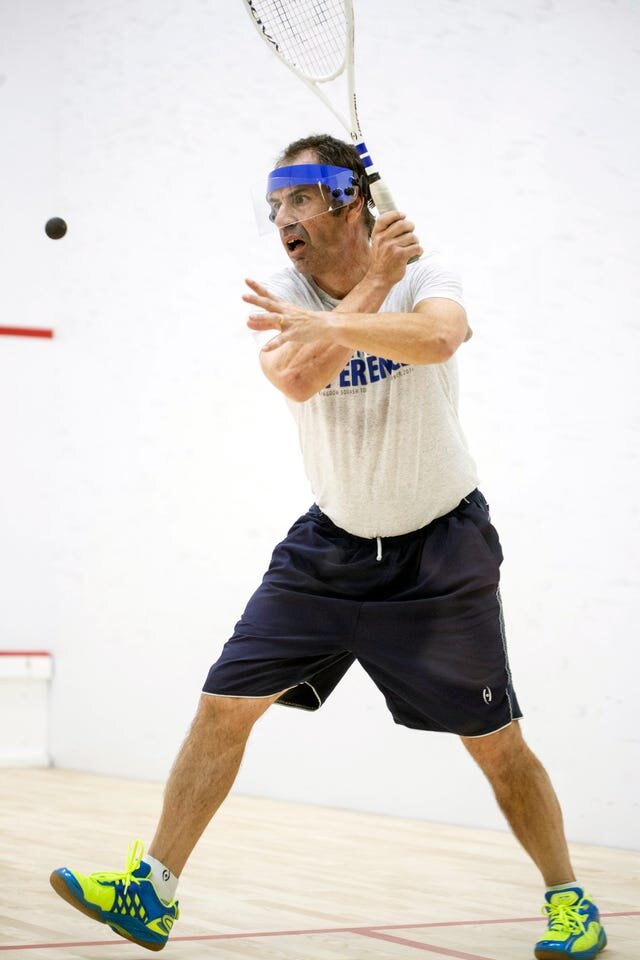 
If you’ve ever had the great pleasure of meeting Richard Millman, you may have experienced this contrasting impression:  On the one hand, he is the quintessential British gentleman, burnished at a fine preparatory school, possessed of a rhetorical style that is a lovely blend of understatement, finely crafted periods, apt word choice, all sutured together with immaculate articulation.  It may even scan in a lilting pentameter.  Then, you are struck by an expression and gait that hints at the early, self-described awkward kid.  Have you just met Winston Churchill or Peter Sellars?  Then, of course, you see him play squash, or have just played him, and matters clarify themselves: You’re in the presence of a master, maybe even genius.  Well, I was fortunate to spend some time with Richard as he reflected on some of his memorable victories, and here are some of the valuable gems that emerged.

Joining: Picture this: you are 18 years old.  You are playing for a national championship for your county team (Norfolk).  It is 2-all in a five-man match, and you are the last person out, and you are 2-0 down.  But there’s more.  You have never had a particularly good relationship with your coach, the same coach from high school whose belittling treatment of you has become routine, and he has threatened you with your life after games one and two should you lose.  Now add this: you are the captain of the team, and you are staring down the barrel of disappointing your team.  Finally, you are playing the national powerhouse team, and you are playing a player who is more highly ranked than you and whom you’ve never beaten, not to mention that no Norfolk county team had ever won a national championship.  It is a true David and Goliath situation, only Goliath already has a considerable lead.  This was precisely Richard’s situation.  As it happened, some of his teammates—all having been teammates on their high school team (Gresham’s School) as well—sidle up to him in his corner after their coach’s furious departure, and say a version of: “We believe in you.  We’ve done this together for many years now.  Can you please pull it out?”  Hearing this, and aided by hand-in/hand-out scoring, Richard digs in, doesn’t make an error, and pulls out the match in five, saying 43 years later: “It was their adulation, their appreciation that I’ve never forgotten.  Sure, it was nice to win a national championship, but playing for the team was what really did it for me.”  It is always a powerful combination when performance goals mesh with those of human development.  When this match took place, Richard was developing what Harvard psychologist Robert Kegan calls “the institutional self.”  That is, the self that is more interested in affiliation and membership rather than the inward-facing work of self-formation.*  This story is such a vivid depiction of this developmental hurdle, as we see Richard turning his back on his coach, the punitive and overbearing father figure, and toward the opened arms of his team.

Irreverence.  Anyone who played in the US Masters Championships held in conjunction with the S.L. Greene National Championships in the 90s and aughts knows that the main event was rarely the S.L. Greene final, but rather a Richard Millman-Dominic Hughes final in their age bracket.  Their squash is everything that North American hardball wasn’t: soft, underpowered rails, feathery boasts, wily deception, cathedral-high lobs offset by drops dying into oblivion, all played with balletic movement and impeccable sportsmanship.  It is a splendid thrust and parry, separated only by Dominic’s penchant to take the ball a tad earlier and Richard’s preference for holding and deceiving.  While Richard will be the first to tell you that Dominic has claimed the lion’s share of their encounters, he recalls one of the matches that went his way, in which he used irreverence to motivate himself.  The match took place at the US Nationals in 1999 held at Trinity College in Hartford, CT.  Down 2-1, Richard realized that he was (again) losing to Dominic’s volley, and he remembered that if there’s a flaw there, it’s that Dominic doesn’t like to play longer rallies.  Then and there, Richard said to himself, “I am going to hit backhand rails so slow that my grandmother could get out of her grave and come and get them.(!)”  Point after point, molasses rail after molasses rail, and two games later, Richard is extending that hand and that sly grin.  A lot of coaches and parents use intensity of voice and volume to try to deliver their message during the game breaks.  But, too often, it lands as yelling.  Instead, irreverence, that mixture of hyperbole and the unsayable rings the bell perfectly, and enflames the heart and limbs.  It takes practice, but like all good skills, it’s well worth acquiring to motivate your player or yourself.

Iconoclasm.  One of the elements behind Richard’s success is that his teachings go against so many of the game’s conventions.  He speaks of weight transfer out of the shot rather than into it when hitting, of making use of the entire racket face based on what shot you’re hitting, indeed, of where on your finger pads you should feel the airless, moribund drop.  For him, the court is not a box, but a kaleidoscope.  Players and coaches like this do not come around often.  He is a Bjorn Borg, a Pablo Picasso, an Igor Stravinsky.  But, iconoclasts don’t break the rules just to smash idols, which anyone can do.  Rather, they see things differently and stand firm in the truth of their vision.  And when you stand firm in your own truth, good things will happen on and off court.  People have remarked that when you are coached by Richard it’s not a lesson.  It’s an encounter.  It’s an experience.  And now look at this transformation: we’ve moved from Peter Sellars to Jimi Hendrix.  Have you ever been experienced?