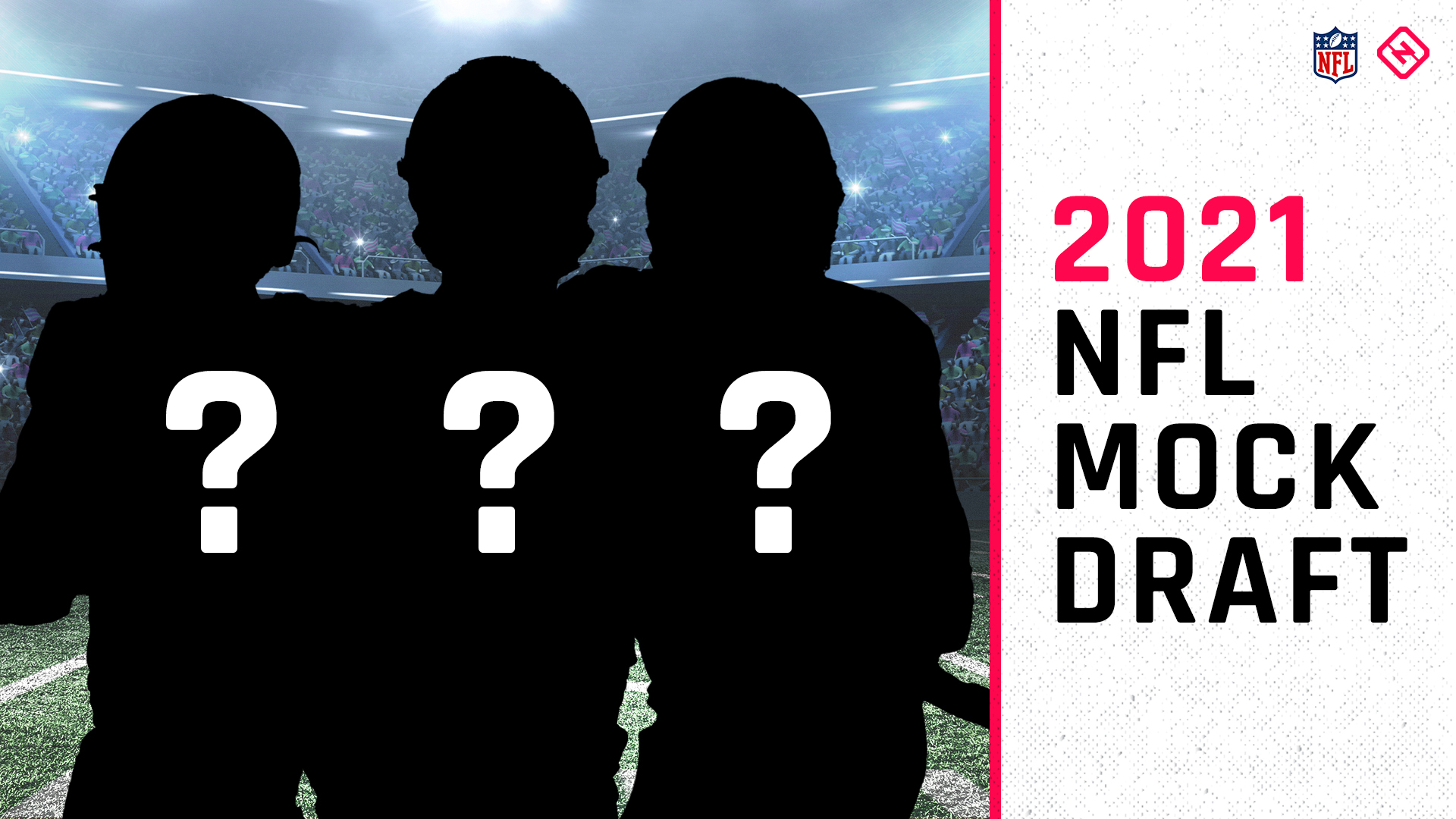 
The No. 1 pick in the 2021 NFL draft has finally changed hands during the 2020 NFL season. Thanks to the Jets’ first win of the season over the Rams in Week 15, the one-win Jaguars now are in the driver’s seat to be on the clock first next April.

The development is well-timed with the end of college football’s regular season and the beginning of bowl season leading into the College Football Playoff semifinals. A lot of top pro talent will be on the field when Trevor Lawrence and Clemson face Justin Fields and Ohio State, and while DeVonta Smith and Alabama battle Notre Dame.

Here’s how we see the picks from 1-32 playing out now. The top 18 picks are based on the current draft order, according to Tankathon. The bottom 14 is based on SN’s projected finish of the current playoff teams through Super Bowl 55.

With Gardner Minshew showing his limitations, the Jaguars will jump on this generational talent, a can’t-miss QB prospect in the echelon of Andrew Luck and Joe Burrow. Lawrence isn’t just a great passer and athlete; he’s an accomplished leader and winner, just like those other two. Whether it’s Doug Marrone and Jay Gruden running their offense again (unlikely) or a new coaching staff, Lawrence can take their offense to new explosive heights as a no-brainer first pick for their new GM.

MORE: The 10 best fits for Trevor Lawrence in the NFL

Fields got his desired second college starting season, albeit abbreviated, to help build his stock and push Lawrence, confirming the dynamic dual threat has his eyes laser-focused on the draft after thriving in Ryan Day’s pro-friendly offense. Fields will get to show off his rushing and passing prowess head-to-head against Lawrence on the biggest stage. Let’s hope the Jets are smart and pair him with an offensive-minded coach who is a lot more consistent and competent than Adam Gase.

The Bengals have made some investments in their offensive, line including first-round tackle Jonah Williams from 2019, but they need to better protect franchise quarterback Joe Burrow when he can come back from his big knee injury. Sewell’s strong, sturdy presence would be a great fit in front of Burrow and also help their running game.

Wilson has had an exceptional season with his accuracy and downfield passing to quickly emerge as a threat to be the third QB off the board after Lawrence and Fields. Teddy Bridgewater has fared pretty well as the bridge QB in Carolina, but there’s also an indication they have a limited ceiling with him and should think about replacing him by 2022 with a longer-term solution. Wilson would be a strong, cerebral fit for Joe Brady’s offense.

The Falcons have been an absolute mess at cornerback with some of the worst downfield coverage in the NFL and need a potential big shutdown corner, stat. Farley was one of the first top prospects to opt out for his final college season. He has great size and solid all-around coverage skills for the position.

The Dolphins have Preston Williams and Mike Gesicki to help DeVante Parker, but they could a more transcendent versatile receiver to be their go-to guy. Chase, opting out of LSU’s season, is coming off a big final season with Burrow (84 catches, 1,780 yards, 20 TDs) and would be an excellent additional big playmaker to pair with Tua Tagovailoa.

The Eagles took a wide receiver in the first round in 2020 (Jalen Reagor) but they need a true dominating big-play No. 1 in the vein of DeAndre Hopkins or Stefon Diggs. Smith has picked up from he left off last season to become Heisman Trophy-worthy. He has 98 catches for 1,511 yards and 17 TDs in 11 games this season.

Surtain, with his pedigree, size and ball-hawking skills, has the potential to be a true shutdown player. The Cowboys’ secondary has been awful without Byron Jones and Surtain would be a good complement to fellow Alabama product Trevon Diggs. Jerry Jones needs to focus on shoring up the back end first.

The Chargers might not be able to afford to re-sign Hunter Henry long term and they could also think about more unique 12 personnel to help Justin Herbert take the next step as a passer in Year 2. Either way, Pitts, as the best player available here, needs consideration. Pitts posted 770 yards and 12 TDs on only 43 catches, a rare field-stretcher for the position as well as dominant red zone force.

Paye tapped into his massive pass-rushing upside with two sacks in four games this season before being curbed by a lower-body injury. The Giants are strong up the middle defensively and look better at cornerback, but they are in desperate need of punching their old calling card on the edge.

The Lions have had some of the worst linebacker play in the NFL and must address their run-stopping and coverage issues there. Parsons is a rangy, hard-tackling and well-covering cleanup man in the Luke Kuechly mold. Ahead of his opt-out from conference play, he had 109 total tackles, including 5 sacks, in 2019 for the Nittany Lions.

Jones is having himself a big Heisman Trophy worthy season replacing Tagovailoa in Tuscaloosa. He has been the complete package in leading the Tide, having a Burrow-style breakout with his accuracy, big arm and downfield production, racking up jaw-dropping passing totals in the process. His strong pocket passing should have great appeal as an upgrade to Jimmy Garoppolo for Kyle Shanahan.

The Broncos, with quarterback on the backburner, need to think about getting younger on the edge to help Bradley Chubb with Von Miller coming of a season lost to an ankle injury before his age 32 season, the final year of his contract. Rousseau, who opted out of the Hurricanes season, didn’t really need to play to boost his stock after posting 15.5 sacks and 19.5 tackles for loss in his lone significant and final season under defensive-minded head coach Manny Diaz.

The Vikings have been hurting at guard next to first-round center Garrett Bradbury. Davis can be an elite NFL interior blocker and already has showed plenty in the way of paving the way for the Buckeyes’ prolific rushing attack before deciding to opt in back into the season.

Waddle played only four games before his season-ending ankle injury and he still posted 25 catches for 557 yards and 4 TDs. The Patriots have had a rough time with wide receivers except for Jakobi Meyers and needs a big hit at the position. Tapping into Nick Saban and Alabama is typically good for Bill Belichick.

Here’s a chance to look right up to Evanston to fill an important blocking need for David Montgomery and whoever the QB will be in Chicago in 2020. The Bears need an athletic, versatile lineman to consider on the left side and Slater, who will remain out of his final season with the Wildcats, is quickly rising up the boards again with his all-around skill set getting more attention.

The Raiders drafted well at defensive end and cornerback and invested heavily in linebacker in free agency, although the returns have been limited. The missing ingredient is a linchpin up front against the run. Barmore combines strength and power with great technique and is someone reconsider this high up the board.

The Ravens have too many speedy deep threats and not one consistent, reliable route-running go-to guy all over the field. Marquise Brown needs a better complement. Bateman, who opted back in for a while in 2020, put up 60 catches for 1,201 yards and 11 TDs working opposite Buccaneers draft pick Tyler Johnson in 2019. Without Johnson, he finished with 36 catches for 472 yards and 2 TDs in five games this season.

WFT will consider a first-round quarterback but winning the division would change things up with being in ideal position to do so for Ron Rivera. Darrisaw has entered the first-round mix of late with standout athleticism that can help him develop into a smooth and nimble long-term pass protector in the NFL.

The Cardinals are weak in cornerback coverage behind a rejuvenated Patrick Peterson, outside and inside.  Horn, the son of former NFL wide receiver Joe Horn, is getting the due he deserves as a big-time corner. His big two-interception game against Auburn fueled an upset as he was the best player on the field in that game. Horn has good size, length, athleticism and physicality.

The Dolphins need to get more atlhletic and shore up their inside pass protection while also getting an asset with considerable upside as a run blocker. Vera-Tucker’s raw skills can be refined well, especially if he bulks a bit to improve the power part of his game.

The Bucs tried their best to solve running back woes in the passing game by adding Leonard Fournette, Ke’Shawn Vaughn and LeSean McCoy behind Ronald Jones, but Tom Brady really could use a more versatile weapon in the James White mold for his second year with the Buccaneers. Etienne, who surprised by returning to Clemson, has racked up 1,406 scrimmage yards and 15 TDs this season, adding to his dazzling career numbers with the Tigers. He’s a special back for the modern NFL offense, with some of both Alvin Kamara and Dalvin Cook in his game.

The Colts need to think about a replacement for 32-year-dold potential retiree Anthony Castonzo, who’s now battling a knee injury. Cosmi is a massive prospect for the position with nimble feet to match.

The Browns need to healthier, more active and versatile on the second level to help their defense all-around. Owusu-Koramoah covers like a defensive back and has room to grow into a physical run stopper.

Should the Jaguars invest so highly in Lawrence as their franchise quarterback, they need to think about addressing left tackle, too, with Cam Robinson set to become a free agent. Mayfield has stood out on film with his size, length and strength and can develop into a smooth blocker a la the Broncos’ Garett Bolles.

Collins explodes as an athlete and can make a lot of plays with his agility, quickness and range. Mike Vrabel would love his second-level versatility to help with the pass rush and coverage.

With Fields likely on the way and some promise in the backfield, the Jets should be an effective all-around running team with a new coach in the vein of Ravens’ and Cardinals’ offenses. Smith is a strong and powerful run blocker who has proved he can fit any scheme well.

The Steelers might be getting one more season from Ben Roethlisberger to give them time to polish this prospect with massive physical upside. Despite Lance’s one-game showcase for the Bison not going as planned in 2020, one cannot ignore the impressive physical and athletic skills he displayed in his first full season of action (2,786 yards passing, 28 TDs, zero INTs, 1,100 yards rushing, 14 more TDs).

Trask has been up to the task leading a sizzling Gators passing game confidently with his arm, accuracy and athleticism to get into the first-round conversation. He’s raised his efficiency and looks like a great fit in Sean Payton’s offense as Drew Brees’ true all-around successor vs. Taysom Hill.

The Bills need to replenish their pass rush for Sean McDermott with some more youthful juice. Ossai has been the recent fastest riser at the position as a tremendous upfield athlete with high motor who relentlessly goes after quarterbacks.

The Packers have made it work by committee without upgrading wide receiver opposite Davante Adams for Aaron Rodgers. They need to give him a dangerous short-to-intermediate receiver with home-run after-catch skills. Moore, who opted back in to make more big plays for the Boilermakers in 2020, is a versatile athlete and an explosive play waiting to happen.

The Chiefs need to keep considering the second level of their defense with a physical run stopper with high energy to rack up tackles. They.can stay in state to grab this dynamic early entry who can play either inside as a near-future replacement for Anthony Hitchens or provide a immediate strong-side upgrade over pending free agent Damien Wilson.