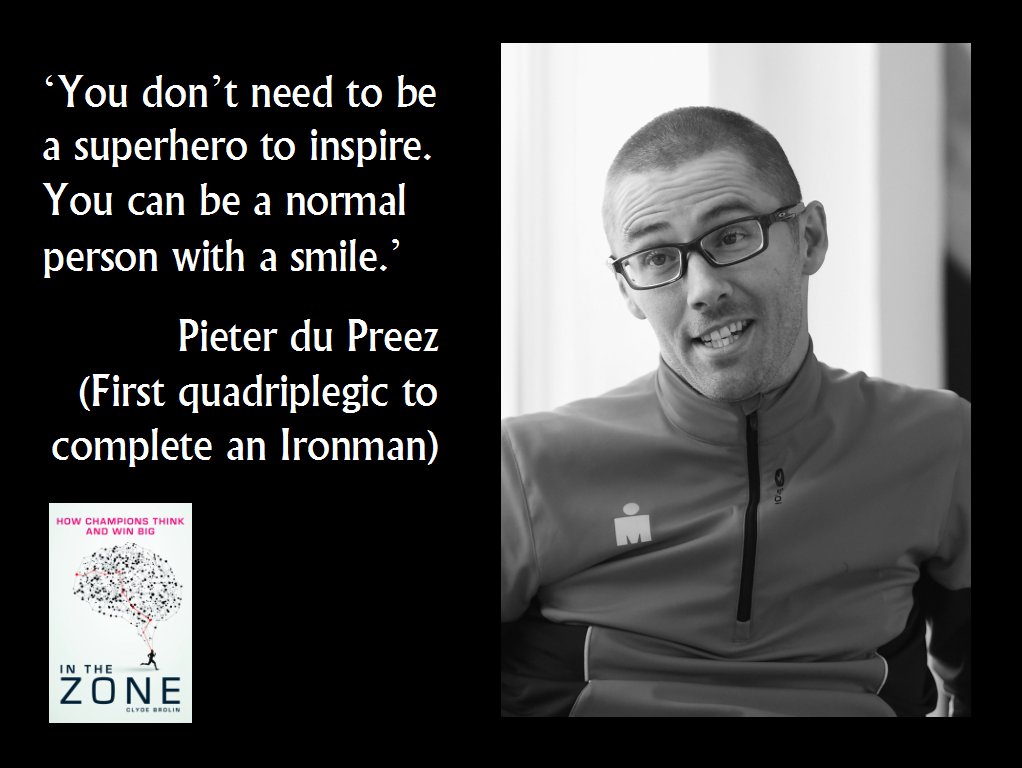 Keep smiling – and inspire the world

Of all the interviews I collected for In The Zone from hundreds of world class sportsmen, the above quote from South Africa’s Pieter du Preez was honestly not the one I expected to go out of date.

Du Preez was an aspiring triathlete competing for South Africa at Under-23 level – until he was hit by a car while cycling in 2003. The crash broke his neck and left him paralysed from the chest down. But what he has achieved since is nothing short of sensational.

Because du Preez has no finger movement, when he first tried getting dressed it took him 15 minutes to put on a single sock. That’s when the ‘can-do’ instincts of life in sport kicked in, and he began setting himself unrealistic challenges in his quest for a regular life.

He started timing himself every day, aiming for an ‘impossible’ world record time of seven minutes to get fully dressed. At first he would stop after 15 minutes and let others help, but after several months of effort he eventually made it to the magical seven-minute mark.

Then, once he had started to conquer everyday life, why stop there? The unfeasible idea soon hit: to be the first quadriplegic to do an Ironman. He tells the story in the book, and I’d urge anyone to dig it up because Pieter Du Preez is one of the most beautiful spirits it has ever been my joy to meet.

But it was what he said about the rest of us that brought tears to my eyes – because it sums up everything I’ve been trying to achieve with my writing.

‘It’s important to realise we all have the power to inspire, able-bodied or not,’ he insists. ‘Everyone tells me how inspirational I am but they don’t realise how much they inspire and motivate me by coming up and telling me that. So we all have that power.

‘People think they need to be a world champion to inspire when it’s really about being nice to the person at the supermarket till. Everyone’s tired and in a hurry but for that moment you give them a smile. You may not think it’s inspiration but it changes their day. Being nice to people is a simple thing. So you don’t need to be a superhero to inspire. You can be a normal person with a smile…’

Or at least we could. Somehow we’ve been persuaded that we should now cover our faces in public, and with it any hope of offering this most powerful kind of inspiration to others.

I don’t care how much fear has been rammed down our throats over the past few months, it’s nothing compared to the fear I have of the damage this will do. If this doesn’t cause you any anxiety, it should. And if it does, fear no more. You are officially exempt from the madness.

For all our sakes, please take off the damned mask…