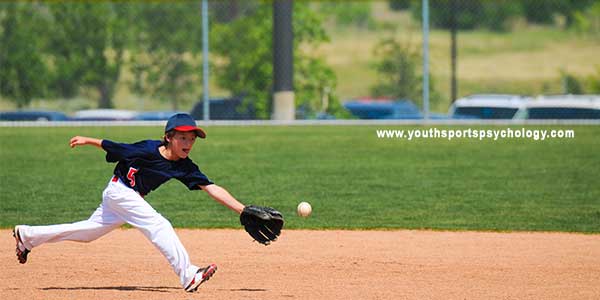 Working with the makers of a new app, Players Way, he’s on a mission to help keep youth baseball players in sports and help them cope with the fact that baseball can be hard on a player’s self esteem.

Quoting one of his own mental coaches, Thole told us during an interview with our Ultimate Sports Parent podcast, “Baseball is the biggest self-esteem destroying sport.”

The problem: in baseball, failure is part of the game. Players succeed about 30% of the time on average.

Given that mistakes–not making the home run or striking out, for example–are just part of the game, it’s important to help kids focus on letting go of mistakes, he says.

In the slow-paced environment of baseball, young athletes can sit and stew in their mistakes for long periods of time during games. In other sports, which are faster-moving, they don’t have time to focus on mistakes.

In ice hockey, for example, which is fast-paced, failure is not as “in your face” as it is in baseball.

To help kids move past mistakes, the Positive Coaching Alliance suggests that parents use a signal–a flushing motion, for instance–to tell kids to flush away the mistake and move on.

Thole suggests that parents help kids move past mistakes or bad games. They shouldn’t say things like, “Why did you swing at the first pitch? Why did you strike out?” Instead, urge kids to let go of mistakes and move onto the next play.

He also suggests that parents take their kids out for ice cream after a game, whether their team wins or loses. Parents should focus on enjoying the summer, not on trying to ensure their kids earn athletic scholarships, he says.

Through a new app, Players Way, developed by the Major League Baseball Players Association and others, Thole and other former and current pro baseball players give parents and coaches tips with videos and other media.

Thole says that the pro players have embraced the idea, providing more content than the organizers expected.

“The best in the game stand in front of the parents and say, ‘This is how to get the best out of your kids,’” he says.

Listen to the Podcast Below:

You can benefit from our 15-plus years’ of work in sports psychology and sports parenting research. Now, you can tap into our secrets to sports success through a cutting-edge, 14-day program that helps young athletes overcome the top “mental game” challenges that sports parents face—and the top challenges young athletes face. In our 14-day program, you and your young athlete will learn just what it takes to cultivate confidence, focus, and composure in sports!

Through our extensive research, we’ve discovered that the parents of top-performing, happy, young athletes know how to support their kids in sports. These parents understand just how to: