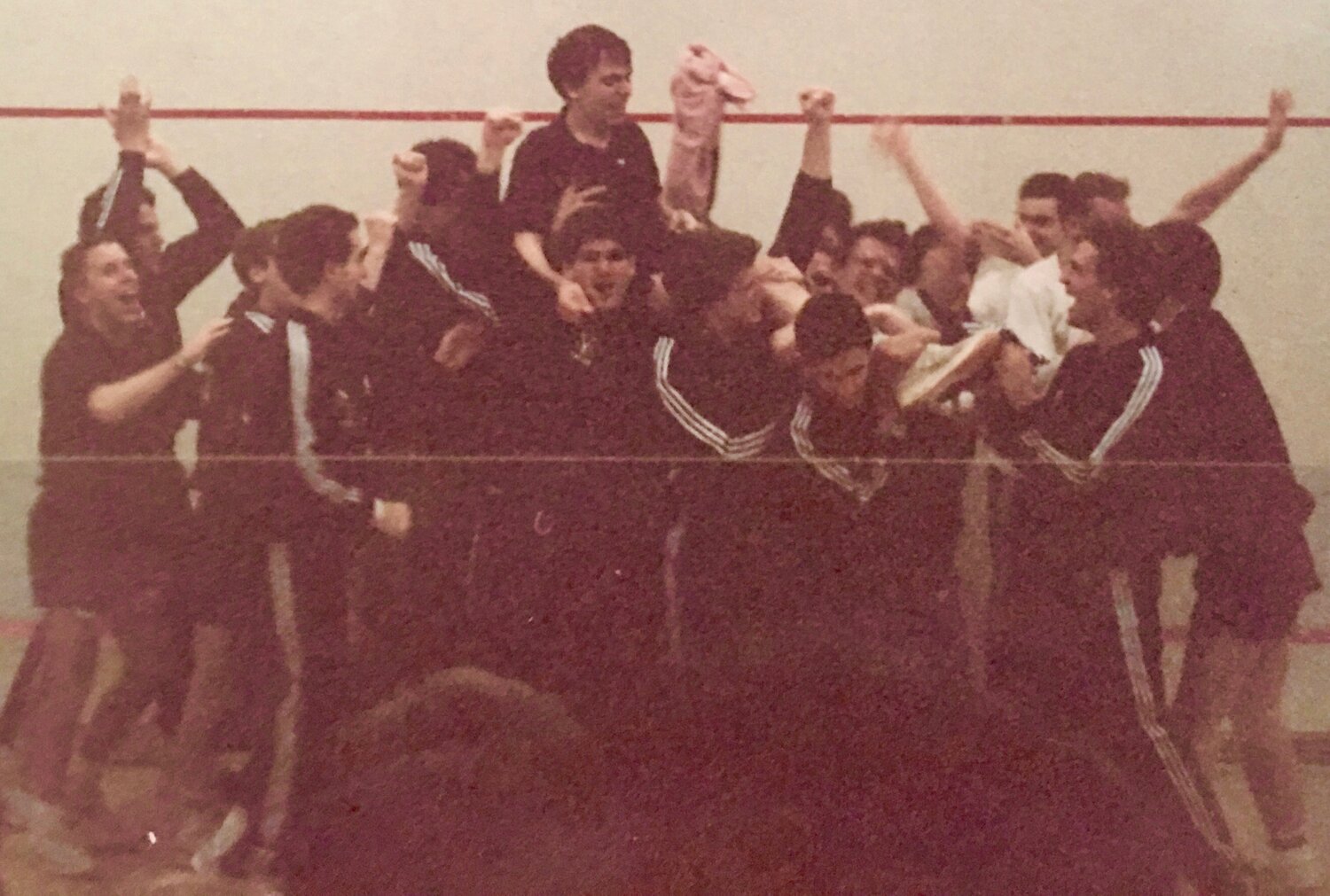 
This year, before the shut-in, I had the great fortune of taking my son to the Tournament of Champions in New York City. It turned out that my actual luck was to run into my old friend John Musto, whose trademark Cheshire Cat grin blazed at me from across Vanderbilt Hall. I had been eager to see John since I had read about his win at the British Open, giving him something of a Triple Crown, having won US, Canadian, and British National Championships. An amazing feat for anyone, it is even more remarkable for those in our generation who cut teeth on hardball. We are used to being beaten by international players who didn’t spend their first twenty years playing on a different court using a different ball. So, it was particularly delicious for players of my era to hear of John’s accomplishment. When I was thinking of this series on winners and winning, I decided to contact him to see if he would be willing to talk to me about his win at the British, the jewel in his crown. We had two conversations during which I was on the edge of my chair as John described for me in close detail his forced march through the draw, four matches that he described as “brutal,” and which a British journalist called “the hardest week of any player at Hull.” Although I wasn’t there, I got the pleasure of spending two hours with John as he told me about his wins, about what led to them, what he was thinking, and here’s (only some of) what I got.

1) The British Open Wasn’t Won in a Day. The first thing that I heard in my conversation with John was that, though it was a remarkable feat, it wasn’t an accident. John had played some Masters’ level events internationally in prior years, and stemming from losses in those events, he formulated the goal that he wanted to be competitive with the best Masters players in the world. From that goal came a series of commitments: find a coach, follow the advice of the coach, and devour and incorporate any bit of wisdom that coach gave him. But note: he set the goal at age 46 and won the British at 51.

John cites two skills that helped him in the heat of battle, particularly during his warpath at the British.

2) Admire Your Opponent: John discussed his transition from viewing any opponent as the enemy, the one who wanted to kill you and therefore the one you need to hate and kill first, to someone who came to respect his opponents, even enjoy the good shots his opponents hit. Admiration for the opponent helps keep the mind even-keeled, keeps the aggression at the right temperature, where it can fuel good play without interference.**

3) Accept The Possibility of Losing: Once you come to respect your opponent, you realize that he might beat you if he plays such good squash. John had the following mantra when his matches at the British got tough: “I accept that I might lose this match.” Accepting that possibility freed him up to play the kind of squash he needed to play in order to win. Once the twin imposters of winning and losing are out of the way, it’s easier to meet the twins that really matter: playing your best and having fun.

4) Have Heroes: John is a die-hard sports fan. He has a trove of great sports moments that he has watched from his couch that are very much alive in his head and heart. I encourage you to do the same, so you can dredge the feeling of those moments when you are on the ropes. John mentioned two such moments to me as having helped him in Hull, and his voice overflowed with excitement when he described them: The first was the 1980 US hockey team’s victory over Russia in the Olympics to take the gold medal. This is a fitting memory to feed off because America beating Russia in hockey was as unheard of as an American winning the British Open in squash. Also, he mentioned having been inspired by American Pharoah’s amazing run at the 2015 Belmont Stakes, where he, also fittingly, clinched his triple crown. John had the call from booth during the final stretch of the race in his mind as he played his own nail-biting final in the British: “American Pharoah makes his run for glory!!” When all your energy stores have been used, and it seems as though you have even accepted loss, it is useful to be animated by the glory of others to help you achieve some of your own.

John also spoke of other pivotal aspects of his victory: he told me that he likes to get away from the tournament site during the weekend. Staying around the tournament with its anxious and stale air makes your legs heavy and dulls your mind. John took a day trip to York after the quarters, enjoyed a lovely day in a town he would have never known, and came back for the semis with a refreshed mind and renewed spirit. Finally, if you know John, you know that he levitates when he talks about squash. He simply can’t contain himself. When I mentioned maybe making a comeback of my own to competitive squash, he said, “remember, Matt, playing a long, hard squash point is a L-O-T of fun,” grinning in that John way. Though John has had other jobs in his life, being squash is his life, and when you see John do squash, you see someone doing what he was meant to do. It’s the absence of a gap between being and doing that leads to obliterating barriers, to transcending the possible, to glorious accomplishments.

**For further thoughts on this point, see the post, “On Rivals and Rivalry,” in this blog.