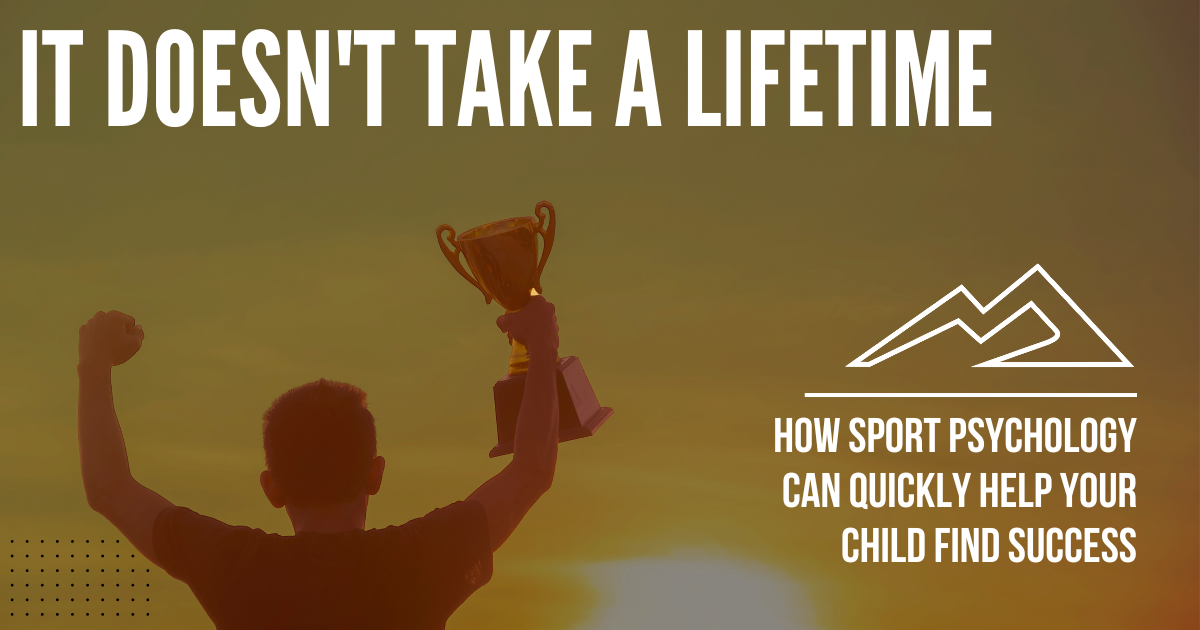 It Doesn’t Take a Lifetime


Sport Psychology can help an athlete transcend from good to great in both sport and life for a lifetime, but it doesn’t take a lifetime for an athlete to use the skills learned from sport psychology to improve.

In fact, many athletes notice a difference after just a few sessions.

The before-and-after portraits of sport psychology success stories can conjure the perception that these mental skills apply only to performances years down the road.  Quite the opposite is true.  While athletes have goals in the near and distant term, sport psychology sessions target tangible skills that athletes are encouraged to rehearse quickly, often as soon as the next practice, to improve performance.  The accumulation of these skills can indeed take time, but the objective of each session, and each skill, is to elevate performance and mental wellness in the here and now.

Athletes enter sport psychologist for a variety of reasons.  The same can be said for the parents who so often refer them.  And while some come into sport psychology knowing exactly what they need, many more just know that there’s a problem that needs addressing or an opportunity that needs seizing…quickly.

“Many parents won’t come to me with those specifics, but they can see that there’s something going on with their child,“ Premier’s Dr. Erin Ayala says.  “It could be Johnny’s having a tough time getting over a loss, or my daughter just isn’t having fun anymore and it seems that there’s been a drop in her confidence.”

Premier’s team works to quickly identify the root of the problem or opportunity. And while things such as confidence, dealing with pressure, and focus all are things that do take time to master, sport psychology can provide athletes with instant tools to notice results by as soon as the next day.

Premier’s team sees individuals of all kinds walk through its doors each day, with a wide variety of stories and needs.  For high school athletes, two of those things are often growing confidence and dealing with negative self-talk and self criticism.

“A lot of athletes have the misconception that they have to feel confident in order to compete confidently,” Ayala says. “That is false. We know that actions and behaviors lead to feelings of confidence.”

That being said, Ayala works to quickly instill confidence in high school athletes by asking them a brief set of questions that prompts action.

“Not just in sport, but in the classroom, in social situations, in dating,” Ayala says. “Usually the answer has something to do with better communication, being willing to speak up.”

That concept translates to sport. We know that look of an athlete who is playing scared who doesn’t want the ball.  Knowing that a confident athlete would want to control her own destiny, Ayala will then work with the athlete to name a few behaviors that exemplify feelings of confidence that can be implemented into the athlete’s next practice or competition.

“It’s surprisingly effective and is a gamechanger for some in a matter of 24 hours,” Ayala says.

The same can be said for different tricks and tools used to manage negative self-talk and self-criticism.  When negative self talk arises, we often respond to it in a negative way because we think it is there because something is wrong.

Yet according to Ayala, beating yourself up when negative thoughts arise is like listening to a bad radio station while trying to turn on a good one.  Lots of noise.

“Instead of trying to avoid those negative thoughts, we should be letting those thoughts in so we can accept them for what they are, acknowledge them, and let them go so there’s room for a new thought,” Ayala says.

Ayala encourages athletes to acknowledge that not all thoughts need to be taken as the end all be all.  We can let some of them pass us by.

“It’s like the parent giving you unsolicited advice for a sport that they’ve never played,” Ayala describes.  “Are you going to say thanks for the advice, mom? Probably, but are you going to actually take it as real sport advice?  Probably not.  So why do you take your own thoughts seriously when you know they aren’t true?”

Ayala likens fighting negative thoughts to playing tug of war with a monster of your own creation.

“Instead of tugging on that rope and wasting all that energy, just drop the rope instead. The monster may still  be there, but you’re not wasting any energy on it.”

Simple tips and tricks like these can help break barriers immediately.

The on-the-field results that come from sport psychology are certainly wins in themselves. Yet perhaps contribution that sport psychology provides for athletes is the values-based approach that all sessions emphasize…the ability to get the most out of sport and life, regardless of results.

“The skills that your child will learn will benefit them in other parts of life, including, but not limited to, relationships, friendships, family, any other extracurricular,” Ayala says. “Whether it be focus, motivation, confidence, or other values, we know that sport psychology is our way in to work with athletes to give them great skills that can help them in all domains of life.”