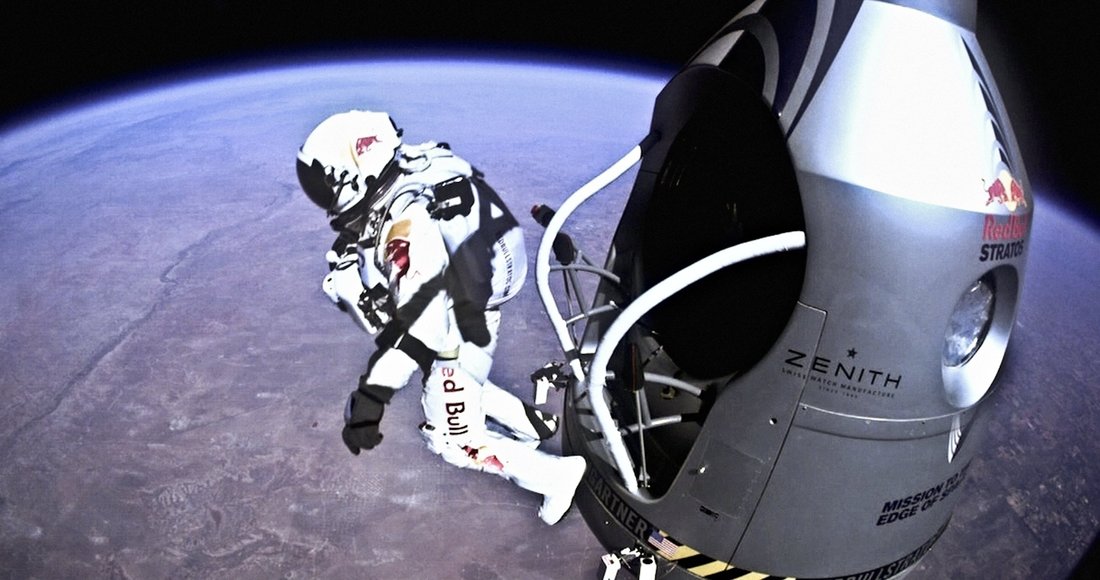 ‘The last second is what’s most special and addictive: when you stand on the edge, you look down and you still have the chance to turn around and walk away. That last particular second when you step off. Then you know you are on the way. You cannot return. You pick up speed and you accelerate so fast. A couple of moments later you pull your parachute, you land, you look back up at that big mountain and you’re still alive. For me this is total freedom.’

Some people really do seem born to fly. When Felix Baumgartner was just five years old, he drew a picture of himself parachuting to Earth with his mother Eva watching on from ground level. Felix gave Eva the drawing, only for her to hand it back to him when he did his first real skydive, aged 17, at a club in his home city of Salzburg.

Felix then spent five years in the Austrian Army’s parachute exhibition team, building up his mastery of freefall. It was when he switched to BASE jumping that the haul of records began. His 1999 leap from Kuala Lumpur’s Petronas Towers was the highest from a building and Rio de Janeiro’s Christ the Redeemer statue was the lowest. This constant quest for greater challenges led to his big finale: the world’s highest ever freefall – from 24 miles up – in a bid to become the first human to break the sound barrier without an engine.

This one wouldn’t come easy. Five long years of preparation for Baumgartner and his Red Bull Stratos team may seem excessive for a mere ‘stunt’ but this is the discipline required to go to the limit and beyond. The Austrian worked his way up with practice runs from 15 and 18 miles. Most crucially he was busy breaking the sound barrier over and over again – away from the public gaze.

‘I visualised this jump from the moment I heard about it,’ Baumgartner tells me in an interview for In The Zone. ‘I did it a thousand times in my mind – just like every other jump I’ve ever done. I lie in my bed and come up with a proper game plan.

‘I’m really good at pre-programming my mind and I always do this. I think about how it will feel, what it will look like. The more I think about it, the more it becomes reality. When I finally do it for real, 99 percent of the time it works exactly like I’d visualised and it feels the same way it felt in my mind.’

The aim of visualisation is more than just preparation; it’s about taking control of the future and tailoring it to our liking. By continually dreaming of his freefall from the edge of space Baumgartner painted a vivid picture and created a momentum in his mind that made success all but an inevitable consequence when he finally took one small step out onto his capsule’s external platform on October 14, 2012.

‘It’s the power of will and the focus you have,’ he adds. ‘When I was standing out on the exterior step it felt almost how I expected. This is the key. The more you can turn thoughts into reality, the better you are. Mental preparation is crucial: you have to ensure you find the right mindset for that moment. Then when you are finally in that position there will be no surprises. You pre-program your mind and it works exactly the way you expect. Most of the time…’

Pity the question Baumgartner is most often asked is: ‘What it was like up there?’ because the view was the last thing on his mind. He was in the Zone…

‘You’re so focused and determined you don’t see or hear anything around you,’ says Baumgartner. ‘In the first part of the jump I spun five times anticlockwise and 22 times clockwise. I didn’t think about anything else because I was so focused on stopping that spin. It was a lot of work and took almost a minute. For the rest of the flight I was more relaxed. At 5,000 feet (1.5km) I had to pull my parachute. Then I realised I’d broken the speed of sound.’

Ready for your own big one? The good news is Baumgartner insists we all have the ability to rise to any challenge, as long as we can silence the doubters: ‘I’ve met Neil Armstrong, Muhammad Ali, Sir Edmund Hillary – and it wasn’t easy for any of them. When they came up with their idea everybody looked at them like “What the hell is wrong with you? This is impossible. You can’t climb the highest mountain in the world…” So you have to focus on one goal and make the judgement: “Am I willing to go the extra mile and invest all the blood, sweat and tears to reach that goal?” If the answer is yes, go for it. That’s what I did and this is where it brought me. Everyone said I could not break the speed of sound. But I proved them wrong…’

To find out much more about how Felix Baumgartner’s record-breaking jump – including how he conquered his fears and coped with his mental demons along the way – read In The Zone: How Champions Think and Win Big