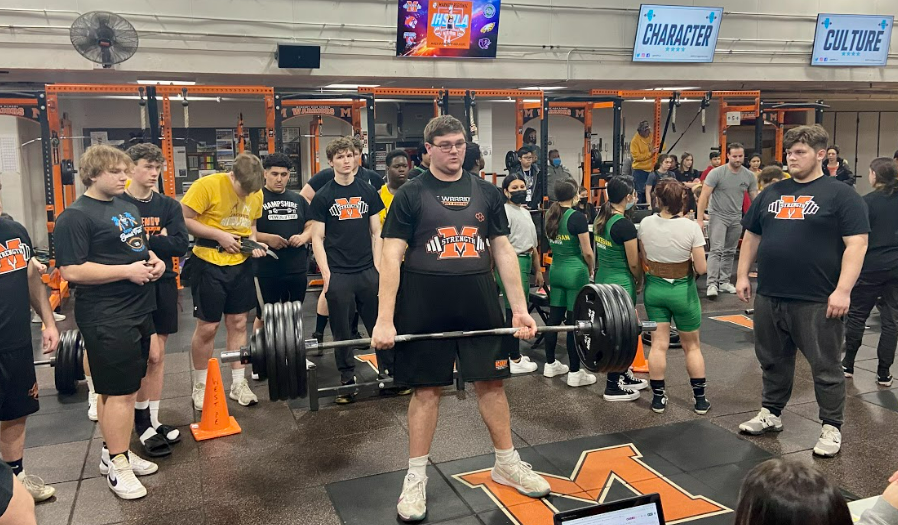 Spectators and competitors moved in unison to the middle of the McHenry Community High School Upper campus weight room. Logyn Frappoly, a McHenry senior, took her place under a barbell; a barbell that was loaded with 365lbs. This would be Logyn’s 3rd and final squat attempt at the Warrior Regional Powerlifting Meet. A successful lift would give Logyn a perfect 3/3 on her squat attempts. Even more importantly, a good lift would earn Logyn yet another spot in the Illinois High School Powerlifting Association’s (IHSPLA) record book as the heaviest squat ever completed by a female lifter in the 181lbs weight class. The crowd was mostly quiet as Logyn shouldered the load. As soon as she unracked the weight, cheers filled the weight room as teammates, competitors, and spectators yelled and screamed encouragement. She began her descent…

Under powerlifting rules, a squat only counts if the lifter lowers the weight deeply enough that the crease of the hip passes the top of the knee. Logyn achieved the required depth and then exploded upwards, easily squatting the load back to the starting position. All 3 judges signaled their approval and Logyn added yet another IHSPLA record to her accomplishments.

Joining Logyn that Saturday were approximately 70 fellow teenagers representing Eastland, Hampshire, Jacobs, McHenry, Mundelein, and Waukegan high schools, many of whom were competing in their first powerlifting meet.

Powerlifting is a strength sport in which the heaviest squat, bench press, and deadlift is contested. Competitors are placed in divisions in which they compete against lifters of similar body weight. The winner of each weight class is the lifter with the highest “total”, which is the sum of their heaviest successful squat, bench press, and dead lift performed at the meet. Additionally, a coefficient factor is used within each weight class. A lighter lifter with a higher coefficient score will beat a heavier lifter who might have a higher total. Lifters get 3 attempts at each of the lifts. Each attempt is evaluated by 3 judges, two of whom must signal their approval for the lift to be counted.

The powerlifting meets held under IHSPLA rules are different from meets hosted by other powerlifting organizations. The biggest difference is the emphasis on team achievement. While individual division winners are celebrated, the biggest awards are reserved for the Men’s and Women’s Team Champions. John Beerbower, director of strength and conditioning at McHenry Community High School and the Warrior Regional Meet Director has this to say about the IHSPLA:

“(We) love being part of the IHSPLA events because of the focus on Character, Service, Culture, and Equity! The events are all focused on encouraging and supporting the high school level athlete. I have seen the events make a positive impact on many student’s self-esteem, confidence, and pride. All participants are cheering each other on and supporting each other to do their best!  All of the other coaches are similar in that they are working with young people who are often competing for the first time and exploring powerlifting. Student-athletes who want to compete individually can always have opportunities to do so.  The IHSPLA events give an opportunity for a team aspect and group competition that is fun and exciting. The organizational leadership does a tremendous job promoting the values that our school believes in as well. We want to develop high CHARACTER & respect.  We want to develop an appreciation and investmentment in community SERVICE. We want to develop a supporting and positive CULTURE. And we want to develop opportunities for celebrating EQUITY and strength regardless of gender, race, or beliefs.”

Meet Director Beerbower went on to say this about preparations for the event.

“The toughest part of hosting a meet this size is securing enough volunteers. Each lifting station needs about 9-10 volunteers each. Our Warrior Regional Meet had 5 stations and needed about 50+ volunteers. It is just a challenge contacting so many adults and students to check on their ability, and asking them to give up a Saturday come help.  We overcame this challenge through enlisting the help of our student-athletes who were involved in student clubs and could count their service at our meet as volunteer hours. I asked all of our students who are in the PE strength & conditioning classes if they were available and would want to help. I asked many of our powerlifting club alumni to come back and help. I asked fellow teachers, coaches, and administrators. You just keep asking and searching until you have enough!   Our former Superintendent of School (Dr. Mike Roberts) even came back and brought his son and daughter-in-law who were a tremendous help. Our event was truly a team effort and it was a PROUD day to be a McHenry Warrior!”

The Warrior Regional kicked off with the squat. Jillian Galuszka of McHenry, competing in the Women’s 114lbs Division, recorded a double-bodyweight squat of 235lbs. Other big squats were tallied by Cynthia Lieu of Hampshire (225lbs), Marissa Pautz from Jacobs (215lbs), and Cameron Hendricks of McHenry (205lbs). The heaviest squat from the ladies was the 365lbs attempt by McHenry’s Frappoly, competing in the Women’s 181lbs Division. Frappoly, a senior, also is a cheerleader and has been a member of the track team. She has been competing in powerlifting for only a year but has already made a mark on teen powerlifting. In addition to her 4 IHSPLA records, Frappoly also holds numerous Illinois state records in the USAPL (United State of America Powerlifting), which is the largest powerlifting organization in the country. She currently trains at Northern Barbell Strength Training under coach Chris Northern.

When asked to describe her experiences as a powerlifter, Frappoly said,

“The things I love most about powerlifting are that it is a very positive environment, and I am always competing against myself as I try to get new personal records. Records are very important to me because they show how far I have come from my first time lifting. Also they validate that I am an incredibly strong athlete. I think competing in IHSPLA is way more fun than any other competitive sport because everyone is so nice and encouraging. Additionally, we are trying to compete against ourselves more than each other, so everyone gets excited when someone gets a new personal record.”

Moving on to the Women’s Bench Press, Galuszka of McHenry once again turned in a spectacular performance. A bodyweight bench press for a teen female is a huge accomplishment. Galuszka’s 115lbs attempt at a bodyweight of only 112lbs represented one of the most exciting moments of the meet. Moving on to the Women’s 123lbs Division, two lifters recorded bodyweight bench presses, Marrissa Pautz from Jacobs (135lbs) and Cynthia Lieu from Hampshire both hit the bodyweight mark. Additionally, Lieu’s press of 150lbs broke an IHSPLA state record. Only a freshman, Lieu’s first experience in powerlifting came at a meet earlier this year. A member of the tennis team at Hampshire, Lieu’s primary interest in powerlifting is the opportunity to lift heavy weights. She says,

“I want to see what my maximum potential is on squat, bench, and deadlift. I want to exceed my limits and potentially break even more records. Lifting heavy is my favorite hobby. I enjoy surpassing my maximum capacities and looking at all the progress I’ve made when it comes to powerlifting. Seeing where I’ve started with just the 45LBS bar to adding more and more weight makes me strive to push even harder. The state record I broke on Saturday means more than words could ever say to me. I never in a million years expected that moment to occur, but it did. The entire day was full of ecstasy and I was hyperventilating because I couldn’t believe it. When you’re competing, your focus is only diverted to you and only you. At that moment, you don’t think about anything else or do anything else. It’s all mind over matter. It’s in the mental headspace. You push your hardest.”

Also breaking the bodyweight mark on the bench press for the women was McHenry lifters Hendricks (145lbs) and Frappoly (175lbs).

Moving on to the Women’s dead lift, impressive lifts were recorded by Galuszka (225lbs) and Waukegan’s Fabiola Huerta (235lbs) in the 114lbs division. Jacobs’ Marissa Pautz pulled an impressive 275lbs in the 123lbs division. Lieu was not far behind with a 260lbs attempt. Eastland’s Natalie Colehour tied with Kaylie Kopsell from McHenry and Jayla Jackson from Mundelein with the meet’s second-heaviest deadlift for the ladies with a successful pull of 265lbs. Frappoly recorded the heaviest dead lift for the women with a successful pull of 350lbs.

In reflection of the day’s events, Meet Director Beerbower said,

“I was impressed with the overall strength & quality of the athletes / lifters after all of the time off during a challenging years of COVID-19. The kids seemed to appreciate and enjoy the opportunity to showcase their strength! The support of the IHSPLA volunteers and surrounding coaches was incredible. Coaches from Stagg, St. Viator, New Trier HS, and McKendree College all drove out to serve and help with the meet, even though they didn’t have any athletes participating. All of the hard work and hours of service by our volunteers was worth it in order to see the positive experiences that the 2022 Warrior Regional provided. The meet ran very smoothly and efficiently. We were able to start a few minutes after 10am and finished up awards about 4 hours later with a large group of 75 participants. It was a true honor and privilege to host an IHSPLA event. We hope that all of the athletes and coaches enjoyed their time at McHenry HS. I hope this is something that we are allowed an opportunity to host again in the future.”

The final regionals of the 2022 IHSPLA season will be the Titan Regional April 2nd in Glenview and the Boilermaker Regional on April 16th in Bradley. The IHSPLA State Meet will be hosted later this spring.