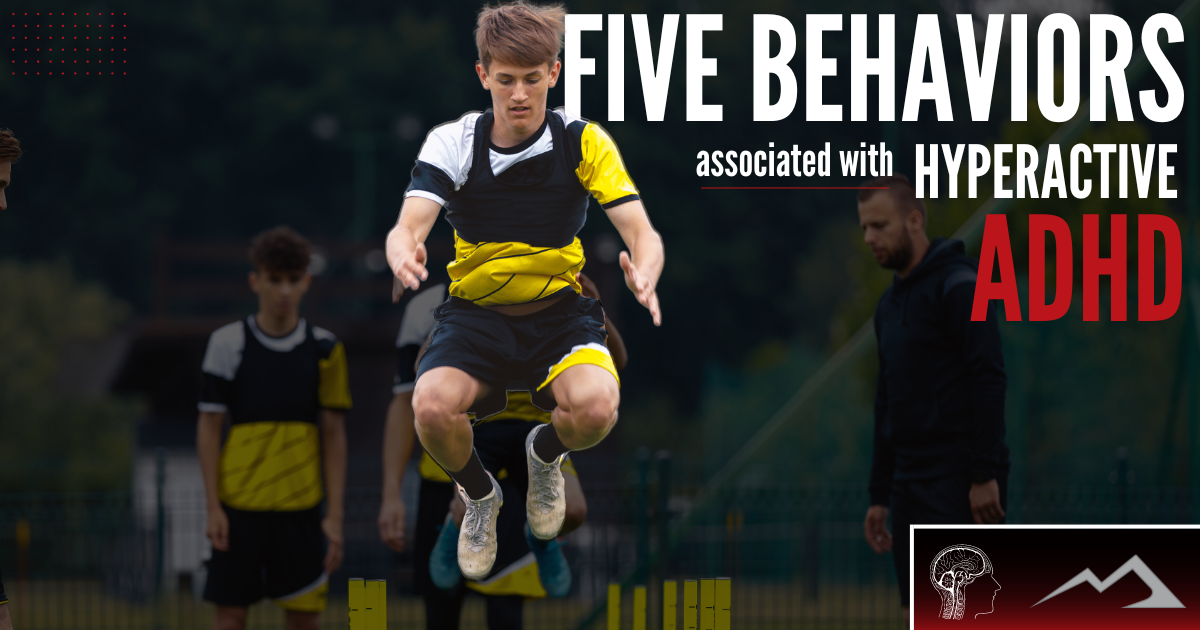 
It’s no secret that having ADHD doesn’t mean that a child can’t find success in sport, school, and life. Yet finding that blueprint for success can sometimes be easier said than done and getting tested is oftentimes the first step towards molding that blueprint.

ADHD is far from a one size fits all; each individual diagnosed with ADHD responds uniquely to different environments and a path to success looks different for each individual. In fact, there are different types of ADHD diagnoses that vary quite a bit from each other.

That being said, there are common signs and behaviors that are often associated with children who have ADHD. These behaviors are by no means an exact indicator, but if multiple ones are displayed, getting your child tested for ADHD might not be a bad idea.

Per Premier’s head of ADHD services Dr. Janet Finlayson, here are five common behaviors associated with children who may have Hyperactive ADHD.

Your child is constantly fidgeting.
Fidgeting can mean a lot of things; clicking a pen, playing with bracelets, biting one’s nails, tapping feet, you name it. And while these actions are certainly commonplace in everyone’s life to an extent, those with Hyperactive ADHD tend to do it constantly.

Constantly means in not just one environment, but at school, home, social settings, and everywhere in between. When evaluating if your child’s fidgeting is truly a problem and/or a symptom of ADHD, ask the question “Is it taking place in multiple environments and is it affecting their performance and relationships in school, sports/other activities and at home?”

Fidgeting is certainly a part of constantly moving, but so is someone’s inability to sit in one place for long periods of time. Think about if your child has difficulties sitting through a movie on the couch, is always getting up during class, or perhaps having a tough time staying put during a family gathering.

Your child is talking when they’re not supposed to or finishing other people’s sentences.
Whose line is it anyway? People with Hyperactive ADHD will oftentimes interrupt others and/or finish another person’s thought when in conversation. Again, we’re all guilty of this at times, but those with Hyperactive ADHD tend to do it frequently, not because of ill-intent, but because it’s natural and they have a difficult time controlling it. This behavior tends to show up often in classroom settings, but can extend to social, athletic, and home settings. If it’s a pattern showing up in multiple environments, ADHD could be in the picture.

Your child is often distracting others.
This behavior goes hand-in-hand with interrupting others; not in an attempt to be rude, but because hyperactivity and energy directly correlate with the behavior. Individuals with Hyperactive ADHD have a niche for focusing on one concentrated thing and that can often be communicating/engaging with others…sometimes when they’re not supposed to.

Again, this behavior is most commonly seen in school settings, but can present itself at home, in sport, and in social settings.

Your child seems like they are always on the go.
All mountains and valleys, with little plateaus. Individuals with Hyperactive ADHD often go at 100 miles per hour from one task/activity to the next with little moderation. The concept that those with ADHD cannot focus is misleading; individuals with Hyperactive ADHD can indeed focus yet tend to zone in on one particular thing at a time and do it to the max.

Perhaps a child loves math class and goes above and beyond on their Algebra homework, yet doesn’t leave any bandwidth for English, Geography, or Spanish homework. In sport, a baseball pitcher may lock in on his bullpen reps in practice, but struggles to focus when the team is practicing defensive situations.

Being involved and active is certainly good for a child’s development and exploration of different things, yet if it comes at the expense of other important tasks, a conversation may be worth having.

The Bottom Line
An ADHD diagnosis doesn’t mean that your child can’t accomplish their goals, hopes, and dreams…far from it. Yet living with ADHD without a diagnosis can often create roadblocks in a person’s pursuit to being the best version of themself.

Not every child has ADHD, but if your child frequently displays behaviors commonly associated with ADHD, testing could be the first step towards creating a blueprint towards success.

Premier offers ADHD screeners for both adults and teens that take five minutes and are free of charge. Premier also offers a free 15 minute phone consultation with one of our clinical psychologists to discuss if ADHD testing is the right fit for you or your child.