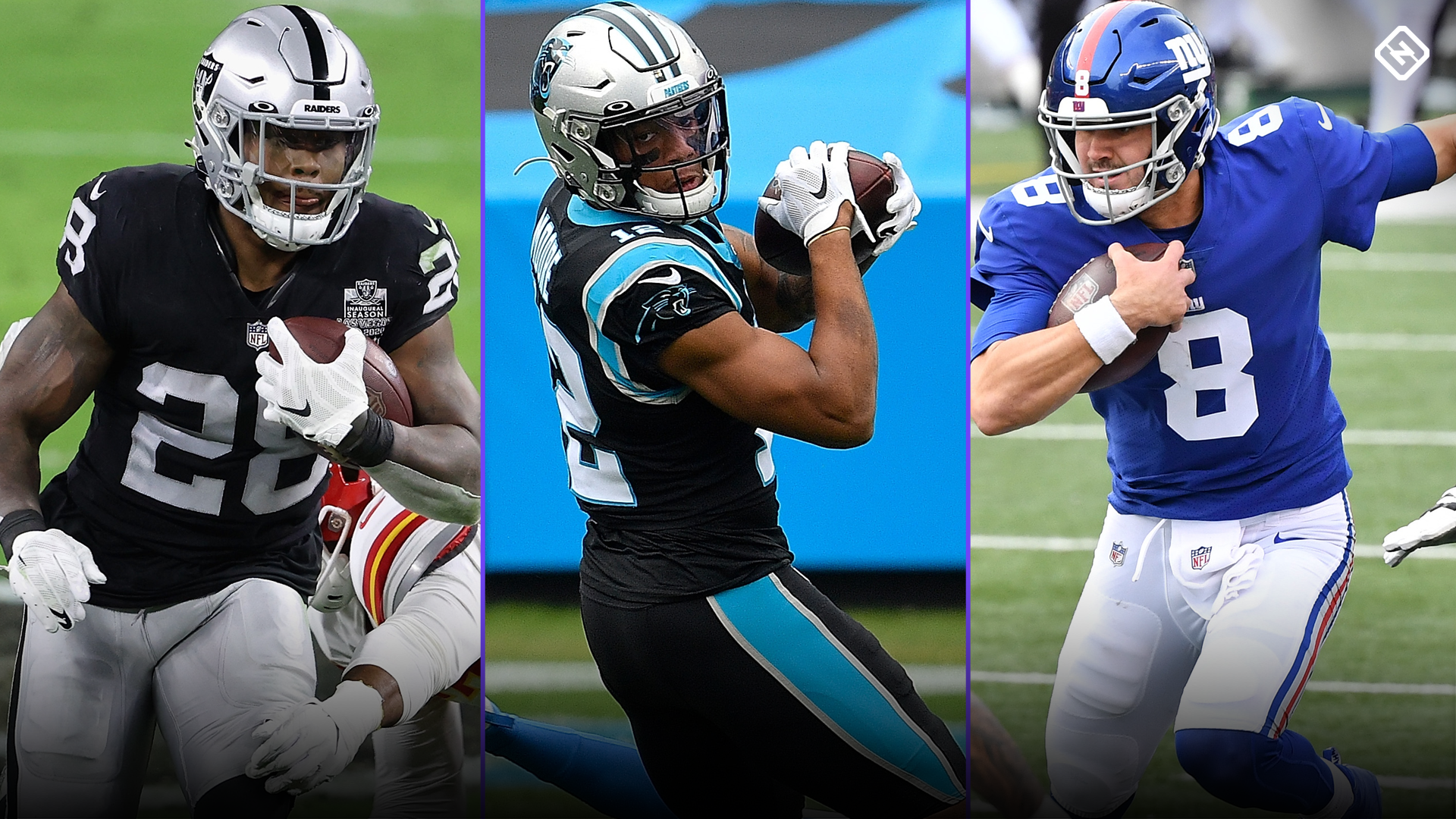 A handful of notable players went down in Week 12 as Josh Jacobs (ankle), D.J. Moore (leg), Daniel Jones (hamstring), and Phillip Lindsay (knee) all suffered various lower-body injuries while playing for their teams. Fantasy football owners will need to know the latest about each of these banged-up players ahead of the Week 13 waiver wire to make informed claims and make their final push for the fantasy playoffs. We’ll be delivering the latest news about these four key options and how they could impact our Week 13 rankings and start ’em, sit ’em decisions.

Late in the third quarter of the Raiders’ loss to the Falcons, Jacobs suffered an apparent ankle injury on a lost fumble. He wouldn’t return to the field in the blowout. Given the status of the game, that was a sensible decision, but it did raise some questions about his availability moving forward.

According to ESPN’s Paul Gutierrez, when Raiders coach Jon Gruden was asked if there was any concern about Jacobs’ injury, he said “obviously, there is.” That doesn’t necessarily mean that Jacobs will miss any in-game action. The Raiders could just choose to limit him at practice this week to make sure he heals up properly. Either way, Jacobs’ status will need to be watched.

If Jacobs’ ankle injury does cause him to miss time. Devontae Booker would become the top RB in Las Vegas, at least for one game. That contest would be a favorable matchup with the Jets, so Booker would be a sure-fire RB2 if Jacobs is absent. As such, Booker will be one of the top waiver wire pickups this week and Jacobs’ owners will want to grab him as a handcuff if they can.

Late in the Panthers’ loss to the Vikings, Moore exited the game with an apparent leg injury. The injury was of a non-contact nature, as he was leaping in the end zone to try to catch a pass and appeared to get hurt in the process. Moore left the field on a cart with trainers and didn’t return, as there were only a few minutes left in the fourth quarter when he got hurt.

Moore’s status moving forward is unclear. The Panthers do have a Week 13 bye, so that will buy Carolina some time to thoroughly diagnose Moore’s injury. With the Panthers sitting at 4-8, they’re unlikely to rush Moore back into action.

Moore owners should be focused on trying to field a worthwhile replacement for Moore during his Week 13 bye while also looking ahead to potential streamers in case he does miss time, which seems likely. Also, if Moore is out, Robby Anderson and Curtis Samuel will have far more opportunities to produce in the Panthers’ receiving game, as will Christian McCaffrey if he can return from a shoulder injury that has kept him out the last few weeks.

Is Daniel Jones playing this week?

Jones suffered a hamstring injury against the Bengals in the third quarter, and while he returned for a few plays, he ultimately limped off to the sideline and stayed there for the remainder of the contest.

According to NFL Network’s Ian Rapoport, Giants coach Joe Judge was optimistic about Jones after the game. However, the team could still err on the side of caution with the injury just to make sure Jones is 100 percent before they put him back on the field. That could lead to Jones missing some time, though the quarterback will have an MRI soon to reveal the severity of the injury. But again, the team is hopeful that the injury isn’t serious.

If Jones is out, Colt McCoy will start at quarterback for the Giants. McCoy, 34, completed six-of-10 passes for 31 yards in relief of Jones and helped lead the Giants to win. He hasn’t won a start since 2014, and he is a clear downgrade from Jones due to his lack of rushing ability. Fantasy owners won’t want to trust McCoy unless they’re in a two-QB or Superflex league or if they’re going for a dirt-cheap QB option in NFL DFS tournaments.

Also, the Giants’ pass-catchers will be slightly downgraded, and Darius Slayton could perform particularly poorly as a result. Slayton had zero catches against the Bengals, and given that McCoy doesn’t have the strongest arm and likes to check down over the middle of the field, he doesn’t figure to do well. The likes of Sterling Shepard and Golden Tate could benefit from this while Evan Engram will still be a solid tight end. Their ceilings are all a little lower, but Slayton, a strong deep threat, will see the biggest drop-off.

Lindsay suffered a knee injury in the second half of the Broncos’ loss to the Saints on Sunday and didn’t return to action. According to Mike Klis of 9News, Lindsay will be getting an MRI and a second opinion on his knee, and while there’s nothing to indicate that the injury is major yet, it still seems like Lindsay could miss time.

If Lindsay is out, Melvin Gordon will go back to being the clear-cut lead back for the Broncos and can be trusted as an RB2 in every matchup. Meanwhile, Royce Freeman would be the player in line to see extra carries as Gordon’s backup, so he can be added as a solid handcuff and potential low-end flex play with games upcoming against the Chiefs and Panthers.