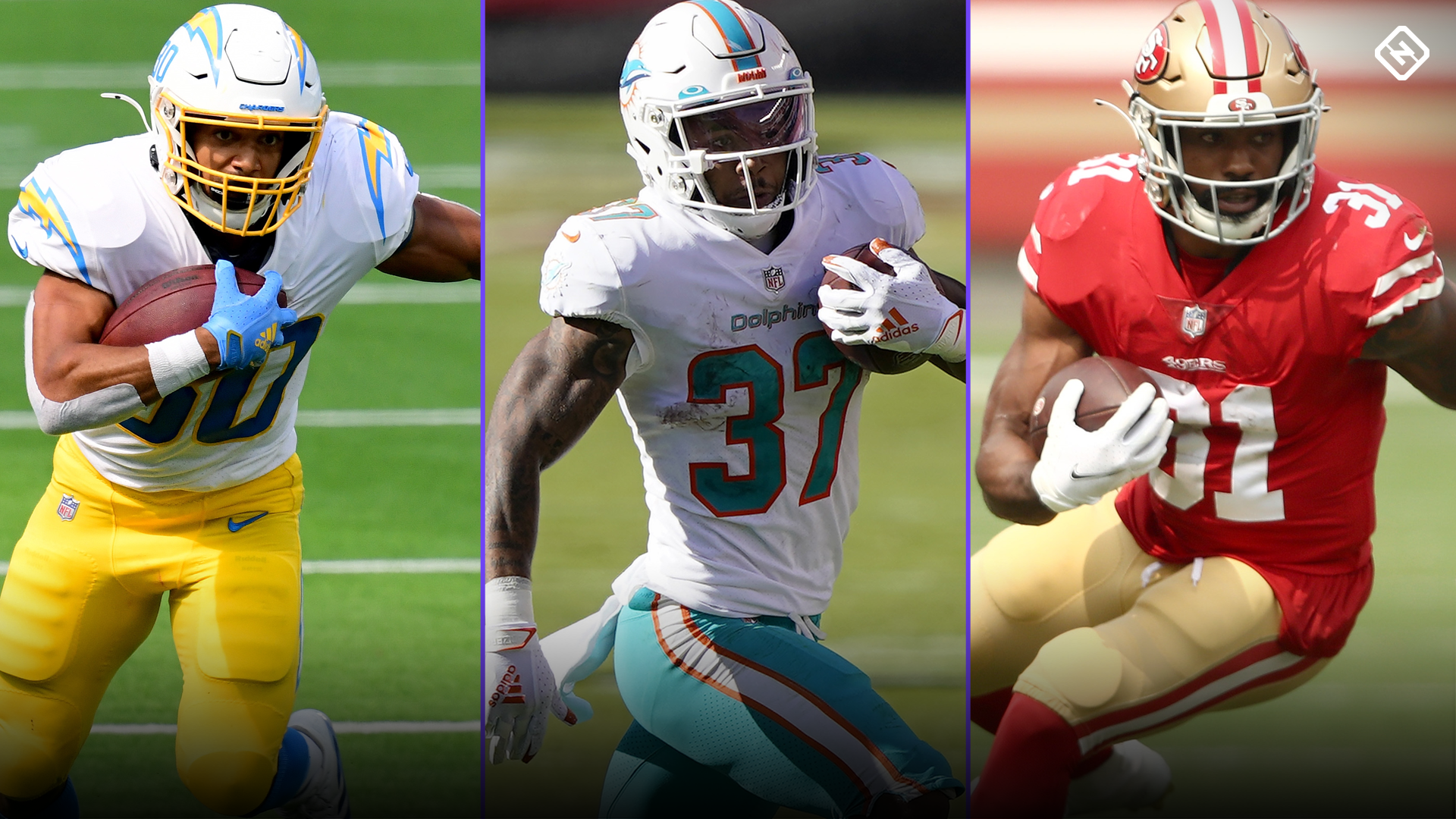 To say the running back position has been ravaged by injuries and COVID-19 in Week 12 would be an understatement. Christian McCaffrey (shoulder), Todd Gurley (knee), Salvon Ahmed (shoulder), Myles Gaskin (knee), James Conner (COVID), and Jonathan Taylor (COVID) have already been ruled out, while Austin Ekeler (hamstring), Raheem Mostert (ankle), Giovani Bernard (concussion), and Kalen Ballage (ankle/calf) are listed as “questionable.” Throw in Mark Ingram and JK Dobbins, who are also on the COVID list, and you have a bunch of start ’em, sit ’em headaches that will have fantasy football owners looking for updates and checking the waiver wire all day on Sunday.

For the latest on banged-up pass-catchers Julio Jones, Adam Thielen, Hayden Hurst, Jerry Jeudy, and more, click here; for news on Zach Ertz, go here; for the Week 12 weather forecast, click here. For all the latest fantasy updates, follow us on Twitter @SN_Fantasy.

Ekeler (hamstring) was officially activated off the IR on Saturday. That’s certainly a good sign, but he’ll still be a game-time decision for Sunday’s game against the Bills. Coach Anthony Lynn was somewhat pessimistic about the idea of Ekeler playing earlier in the week, but he conceded there was a “chance” L.A.’s star running back could suit up.

If Ekeler plays for the first time since Week 4, he would likely split time with Kalen Ballage (assuming he plays), but given the slightly favorable matchup and Ekeler’s pass-catching abilities, he’s still worth using as a standard-league flex and RB2 in PPR. Ballage would have some flex value, as well, as he’d still likely be the goal-line back and receive around eight-to-10 carries. If Ekeler is out and Ballage starts, the latter would be in play as a low-end RB2 in all formats.

Gaskin was not activated off the IR by Saturday’s 4 p.m. ET deadline, meaning he will not play on Sunday against the Jets.

With Salvon Ahmed (shoulder) also out, that means Matt Breida, DeAndre Washington, and Patrick Laird will split RB touches. Breida will likely see the most carries, but given how little he played last week in his return from a hamstring injury, this could be close to an even split. Even in a favorable matchup, it’s tough to trust any of these backs, but Breida has some low-end flex value.

Is Giovani Bernard playing this week?

After getting in a full practice on Friday, Bernard was listed as “questionable” for Sunday’s game against the Giants. Ultimately, his ability to play will come down to whether he passes through the NFL concussion’s protocol, but the full practice is a good sign.

If Bernard is out, Samaje Perine would handle most of the carries for Cincinnati. With Brandon Allen under center, the Bengals offense will be limited, but if either Bernard or Perine is the featured back, he would have flex upside based on volume.

Is Raheem Mostert playing this week?

Mostert (ankle) was officially activated off the IR on Saturday, and though he’s still listed as “questionable” for Sunday’s late-afternoon game against the Rams, it’s believed he’ll suit up.

Tevin Coleman (knee) is officially out, and Jeff Wilson Jr. (ankle) is on the “doubtful” side of “questionable,” so Mostert will be in for a big workload if he plays. If he’s out, Jerick McKinnon would handle almost all of the 49ers RB touches, making him a solid flex in standard and RB2 in PPR. As it stands, expect Mostert to play and be a low-end RB2/flex in all formats.

Are JK Dobbins and Mark Ingram playing this week?

Dobbins and Ingram were both placed on the COVID list after testing positive last Sunday night. They were slated to miss Baltimore’s Thanksgiving game against Pittsburgh, but with that matchup being moved to Tuesday night, some believed they would have a chance to return. However, players who test positive must quarantine for at least 10 days, so it doesn’t seem like it will be possible for either to play this week unless there was a false positive we don’t know about.

Based on what we saw last week, Dobbins looks like the clear lead back in Baltimore’s backfield now, but obviously that could change. In a tough matchup against Pittsburgh, he would be the only one worth taking a chance on if he and Ingram are active. If both are out, which is what’s expected, Gus Edwards would likely see 15-plus touches and be a volume-based RB2/flex.

Is Kalen Ballage playing this week?

Ballage (ankle/calf) got in limited practices all week, but it’s unclear if he’ll suit up on Sunday against the Bills.

The real question is whether Austin Ekeler (hamstring) will play and how much he’ll eat into Ballage’s touches. If Ekeler plays, Ballage can’t be counted on for more than 10 carries, and his surprising pass-catching numbers will take a serious hit, rendering him as nothing more than a TD-dependent flex. If Ekeler is out, Ballage could see 20-plus touches again and have RB2 value in all formats.