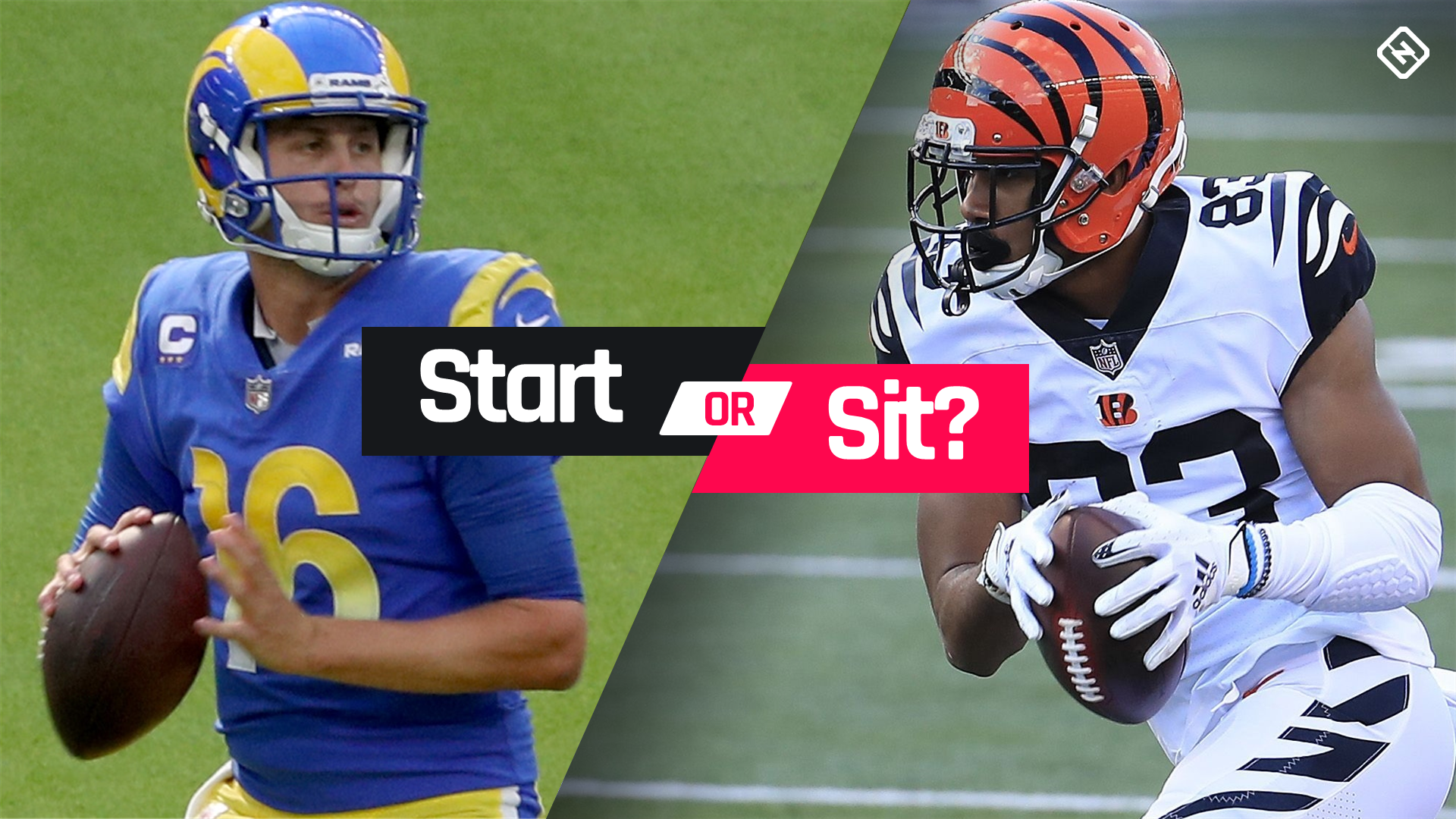 As always, we’ll be ready update the recommendations below based on the latest injury/COVID news, but for now, here’s who we see as safe plays, possible sleepers, and potential busts in the second-to-last week of the fantasy regular season.

Tom Brady, Buccaneers (vs. KC). He gets a much easier defensive matchup than last week, and the Chiefs can be exploited in the short-to-intermediate passing game. The volume will also be high for sure opposite Patrick Mahomes.

Cam Newton, Panthers (vs. ARI). Newton went well over 300 yards passing with a TD against the Texans opposite Deshaun Watson and should do something similar against the Cardinals opposite Kyler Murray.

Carson Wentz, Eagles (vs. SEA). He’s slumping again despite better weapons, but he gets a premium matchup at home against the Seahawks defense.

Philip Rivers, Colts (vs. TEN). Rivers is red hot thanks to some recent great matchups, which included the Titans on the road in Week 10. He can light it up for a third straight week playing well off the run.

Daniel Jones, Giants (at CIN). Danny Dimes has a real nice schedule down the stretch, and coming off a bye, he’ll be dialed in passing and running on the Bengals.

Matthew Stafford, Lions (vs. HOU). Stafford was a major disappointment down his weapons in Carolina, but he should rack up some easy production against a much weaker Houston pass defense.

Jared Goff, Rams (vs. SF). Goff is a hard QB to read from week to week because the Rams ability to run the ball correlates to his success more than passing matchups. It feels like L.A. will once again have trouble running here as they avenge a Week 6 loss.

Derek Carr, Raiders (at. ATL, $5,700 on DraftKings, $7,100 on FanDuel). This one’s easy. He looked super sharp against Mahomes and the Chiefs last week, and the Falcons are decent against the run, which should keep him throwing to his diverse weapons.

Taysom Hill, Saints (at DEN, $6,200 on DraftKings, $7,300 on FanDuel). Hill was a terrific return on DK investment last week, and this seems like an ideal weak for him to grind often in the running to support his downfield passing.

Lamar Jackson, Ravens (at PIT). The Steelers’ defense contained him rather well in the first meeting in Week 8 and should be fired up at home at night on Thanksgiving to ground him again.

Matt Ryan, Falcons (vs. LV). It’s extremely hard to trust Ryan, at home or on the road, whenever Julio Jones (hamstring) isn’t healthy. The Raiders’ pass rush and coverage keeps getting better every week, too. His volume likely will be lower as they try to run more on Vegas.

Ben Roethlisberger, Steelers (vs. BAL). He underwhelmed in the first matchup, and you should be able to do better, as the Ravens have the cornerbacks to at least contain his wideouts.

Kirk Cousins, Vikings (vs. CAR). This game calls for a ton of running with Dalvin Cook vs. a negative game script, so that means Cousins won’t put up big enough digits to be QB1.

Ryan Tannehill, Titans (at IND). He ripped the Ravens well last week, but he goes cold again vs. his tough Week 10 opponent on the road.

Andy Dalton, Cowboys (vs WAS). He should fare better than the Week 7 disaster in Washington, but that still comes with a limited ceiling vs. an above-average defense.

Salvon Ahmed, Dolphins (at NYJ). Ahmed should be the lead back again in a great spot with positive game script

Kalen Ballage, Chargers (at BUF). He should maintain his strong power back role with good volume playing off the downfield passing game for at least one more week.

Ronald Jones, Buccaneers (vs. KC). Jones gets a much better matchup this week and should be heavily involved and productive again.

Jonathan Taylor, Colts (vs. TEN). Let’s hope Taylor has full trust to get the touches here over Jordan Wilkins and Nyheim Hines because he could smash like Hines did against Tennessee in Week 10.

David Montgomery, Bears (at GB). He should return from his concussion to get plenty of touches against a Packers team that struggles every which way against running backs.

Duke Johnson, Jr., Texans (at DET). He has been bad replacing David Johnson (concussion), but this matchup is too good.

J.D. McKissic, Washington (at DAL). He should go back to being busy in the passing game with possible negative game script for Smith.

Damien Harris and James White, Patriots (vs. ARI). Harris should keep the power duties over Sony Michel in the short term, and White also will see a bump in his receiving usage with no Rex Burkhead (knee).

Zack Moss, Bills (vs. LAC). Here’s a hunch the rookie will get the key touches in the backfield.

Todd Gurley, Falcons (vs. LV, $5,500 on DraftKings, $6,900 on FanDuel). Gurley ran into a wall against the Saints last week. Now he gets a weak power run defense and should get steady touches with Ryan struggling.

Wayne Gallman Jr, Giants (at CIN, $5,000 on DraftKings, $5,700 on FanDuel). Get ready for some Giant stacking this week, folks. Gallman keeps looking better as Saquon Barkley’s top fill-in and stays hot after the bye.

Kenyan Drake and Chase Edmonds, Cardinals (at NE). Drake and Edmonds both scored in Week 11, making it less likely they dent the end zone to salvage their limited touch value against an improving Patriots’ run defense.

Melvin Gordon and Philip Lindsay, Broncos (at NO). Good for them to go off on the Dolphins. This matchup is way worse at home.

Devin Singletary, Bills (vs. LAC). Here’s a hunch the second-year player won’t get the key touches in backfield.

Leonard Fournette, Buccaneers (vs. KC). Fournette should go back to being quiet with no touchdowns and less passing-game work.

All Rams (vs. SF). Not worth trusting a committee against that run defense.

All 49ers (at LAR). Not worth trusting a committee against that run defense.

Le’Veon Bell, Chiefs (at TB). He saved his game with a score against the Raiders, but that doesn’t happen again on the Bucs.

Frank Gore, Jets (vs. MIA). He’s the guy with La’Mical Perine (ankle) out, but the Dolphins should rebound against the run.

Adrian Peterson and Kerryon Johnson, Lions (vs. HOU). The matchup is great but so was last week without D’Andre Swift (concussion) and they underwhelmed. Game script won’t help, especially for Peterson.

Brandin Cooks, Texans (at DET). Cooks keeps on deep-frying on Thanksgiving against the Lions’ overwhelmed secondary.

DeVante Parker, Dolphins (at NYJ). Parker had his best game yet with Tua Tagavailoa and should find the end zone again.

DJ Chark, Jaguars (vs. CLE). There’s no Denzel Ward for the Browns, which really helps his chances to produce well in garbage time.

Michael Pittman Jr., Colts (vs. TEN). He’s their top clear playmaker at the position and destroys the nice matchup he owned in Week 10.

Brandon Aiyuk, 49ers (vs. LAR). He did well to avoid Jalen Ramsey in the previous meeting and is too talented and versatile to sit. We’ll also see if Deebo Samuel (hamstring) returns to help soon.

Darius Slayton, Giants (at CIN). The Giants got him going before the bye, and the Bengals give up a ton of big plays downfield outside.

Christian Kirk, Cardinals (at NE). He’s cooled off for sure but so has the Patriots’ secondary as a whole.

Jalen Reagor, Eagles (vs. SEA). Here’s a bit of a dart throw for big plays against a weak secondary, as he’s been the guy at the position of late over Travis Fulgham.

Rashard Higgins, Browns (at JAX). He’s their best outside wideout with no OBJ, and the Jaguars struggle most there in coverage.

Nelson Agholor, Raiders (at ATL, $4,900 on DraftKings, $5,200 on FanDuel). He looked every bit like a No. 1 against the Chiefs even with one key drop. He will rip through the Falcons’ secondary downfield.

Curtis Samuel, Panthers (vs. NYJ, $5,100 on DraftKings, $5,900 on FanDuel). Here’s more of a tournament play because the Vikings play a zone defense, and he should see plenty of short targets with Bridgewater returning into a negative, pass-happy game script.

Jakobi Meyers, Patriots (vs. ARI). He was quieted by Bradley Roby last week, and Patrick Peterson is capable of handling him this week.

Corey Davis, Titans (at IND). He had a big game against the Ravens’ secondary but cools off again in another tough spot.

Marvin Jones Jr., Lions (vs. HOU). He might see Roby with Kenny Golladay (hip) looking like he’ll be out again.

Mike Williams, Chargers (at BUF). He delivered last week, but the matchup is much tougher this week in the elements.

Jerry Jeudy and Tim Patrick, Broncos (vs. NO). A big NO because of Drew Lock.

Emmanuel Sanders, Saints (at DEN). Revenge-game narrative aside, his big-play potential will be limited against his former team.

John Brown and Cole Beasley, Bills (vs. LAC). The Chargers’ secondary gives up big plays to No. 1s outside but contains auxiliary targets.

Breshad Perriman and Jamison Crowder, Jets (vs. MIA). Perriman cools off, and Crowder doesn’t do much without Sam Darnold (shoulder).

Hunter Henry, Chargers (at BUF). He’s rolling with Justin Herbert now and the matchup is great.

Noah Fant, Broncos (vs. NO). He is coming off his best game in weeks, and the Saints remain vulnerable to the position.

Jonnu Smith, Titans (at IND). He keeps on scoring in some way every week, which automatically makes him a plus option.

Austin Hooper, Browns (at JAX). He should dent the end zone in a terrific spot against their linebackers and safeties.

Jordan Reed, 49ers (vs. LAR). He should remain busy getting targets away from the Rams’ cornerbacks.

Robert Tonyan, Packers (vs. CHI). The Bears keep giving up more to the position because of their cornerbacks.

Dalton Schutlz, Cowboys (vs. WAS). He should remain a key target for the other Dalton in a good matchup.

Evan Engram, Giants (at CIN, $4,500 on DraftKings, $5,600 on FanDuel). Here’s your third Giants recommendation on DK and FD, as the Bengals also can’t cover tight ends.

Hayden Hurst, Falcons (vs. LV). The Raiders are much more vulnerable to wideouts.

Eric Ebron, Steelers (vs. BAL). He scored in the first meeting but was limited otherwise.

Logan Thomas, Washington (at DAL). He’s getting quieter in a hurry with Alex Smith.

Mike Gesicki, Dolphins (at NYJ). He’s getting involved again but not enough for us.

Jared Cook, Saints (at DEN). No dice, as he and Taysom Hill were off last week.

All Colts (vs. TEN). The matchup is good again, but it’s random who will produce from their trio.