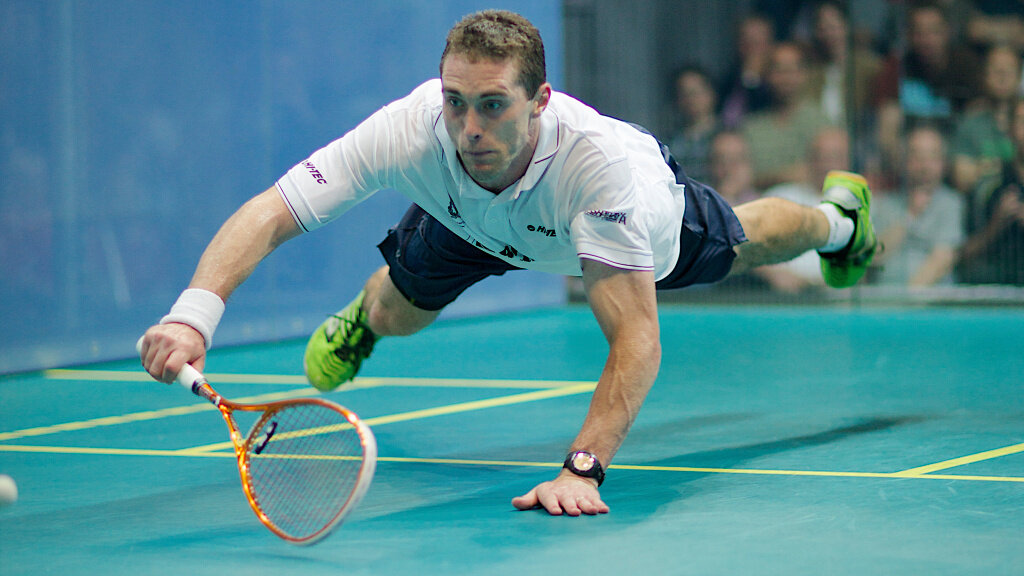 David Palmer on Confidence, Getting Through on Bad Days, & The Power of We — Altius Performance Works


If you’re going to talk with David Palmer about what made him such a prolific and successful winner, you’re going to want to hear about the comebacks: down 2-0 to Chris Walker in his first British Open win; saving match balls in two World Open wins, once to Gregory Gaultier (6!) and once to John White.  He has been called “the master of digging deep,”* and “if anyone was going to pull out a win in decided moments of pressure, it was David Palmer.”*  My recent conversation with him did not disappoint in this regard, as I heard about the integral mental skills behind his legendary skill of getting the job done not only when the chips were down, but when they were stacked high against him.

Confidence: I have written often in this blog about confidence, but it was particularly nice to hear about it from a player of his stature.  For one, David’s confidence wasn’t an inborn trait.  You’d think a guy with his imposing physique and determination came into the world with a large measure of confidence.  But, David told me that his position at the top of the game was by no means a foregone conclusion, that he wasn’t a prodigy as a junior, indeed, was told at one point that he had no serious future in squash.  Rather, his confidence is built on the bedrock of a diligent work ethic instilled in him from his coach Joe Shaw and cultivated through the bulk of his playing career.  As he has said, “there are no shortcuts.  You’ve got to put the work in.”  It is so important for young players, subject to self-doubt and intimidation, to know that confidence is not an inborn trait, but a byproduct of hard work and commitment.  David Palmer’s career is a testament to this reality.  You do not come by a nickname like “The Marine” simply by wanting it.  What’s said about the US Marines, is true about David: “Marines aren’t born.  They’re made.”  Confidence is a verb, not a noun.

Getting Through on Bad Days: David mentioned to me that it doesn’t need to be pretty, it just needs work.  He seemed to understand that while we’d love to play our best squash at the important moments, letting go of that desire and that expectation enables us to play the squash that’s needed on the day.  As he said, “finals are not about winning 3-0, but about getting the job done.”  When you drop idealistic expectations, you are able to take the focus off disappointment at yourself for what you are not doing and see your way clear to doing the next right thing.  For example, though he was down 2-0 to Chris Walker, he and coach Shaun Moxham knew that those two games had been costly for Walker, that they had more gas in their tank and freshness in their legs than Walker.  People speak of his comebacks or his grit as a preternatural ability, but it seems more likely to have been predicated on a willingness to be effective rather than beautiful, on doing what you can rather than what you wish you could.  What a transformational and liberating cognitive shift!  Try it on next time you’re struggling through a match.

The Power of We: You would think that a guy who has been #1 in the world at anything would talk a lot about his accomplishments using the first person singular: “I, I, I.”  And it would be fitting.  But, David is extremely clear that his entourage made his squash career possible, and in most sentences during my conversation with him he used the first person plural: “we, we, we.”  He mentioned Joe Shaw, the transformational coach who instilled the work ethic that made him The Marine.  He mentioned Shaun Moxham who helped him become more tactically sophisticated.  He mentioned his PT, Pat Hermans, who helped keep his body together during his many grueling but injury-free years on tour.  But, mainly, he mentioned his wife, Melinda, “his rock,” who supported him 100% through the rigors of the tour, giving him the platform he needed to perform his best so consistently.  Not that many (incredibly strong) guys credit their wives with their strength so thoroughly and thoughtfully.  I’m reminded of the t-shirt that many women used to wear that said something like: “Behind every strong man is a stronger woman.”  It’s a true testament to the strength of a man if he can be the one wearing that shirt.

* Alix Williams, “David Palmer: his thoughts on history, and his answer to the biggest question in squash.” theshowcort.com