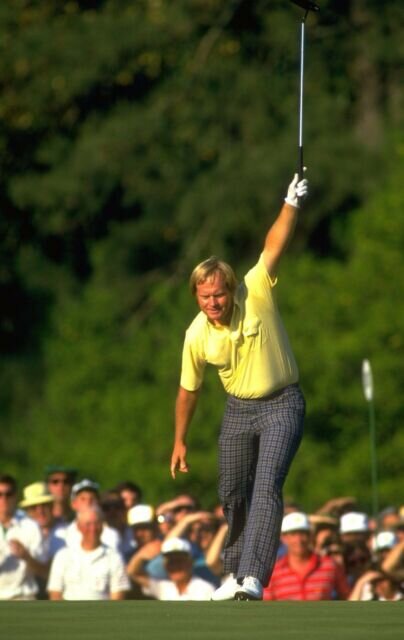 
In 1986, it seemed like Jack Nicklaus was finished with winning golf tournaments and especially major tournaments.  Sitting on a king’s ransom of PGA and international victories, holder of the most major victories by any golfer (19), Jack seemed finished with his playing career, and was well into his post-script as a course architect and full-time legend of yore.  But, as we all know, the 1986 Masters proved everyone, except Jack Nicklaus, wrong.  His historic rally on Sunday of that tournament, in which he shot a final nine 30 to surpass some of the best golfers of the day and win his sixth Masters and 20th major, remains one of the most thrilling stories in golf.  Given that we are all so intensely sports deprived in this age of coronavirus quarantine, I decided to watch the final round of 1986 to see what I could glean for the opening piece of Floating & Stinging’s series on winning and winners.  I encourage you to spend the time watching it, but if you don’t get around to it, let me point out three skills that Jack mentions as having been pivotal for him:

1)            Composure: In the interview after the round in the Butler Cabin, when asked to reflect on his victory, he said that given the difficulty of the course, it is essentially a young man’s golf course, and “it’s a matter not only of playing good golf, but of being able to compose yourself.  And I was able to do both today.”

It’s all well and good to talk about composure, but composure is built up of a host of skills, and Jack Nicklaus mentions two of them in post round interviews after Masters’ wins:

2)          Muscle Memory: At two points in time, Jack mentions feeding off of victories or moments of the past.  In ’86 he talks about his (successful) eagle putt on 15 this way: “I missed (that same) putt in 1975 and I hit it a little too easy.”  And also in 1975, he talks about thinking to himself on 16 tee: “I’ve been here before.  I’ve been in this position before.”  It is no surprise then, that he birdied that hole, famously, in ‘75 and ‘86.  Feeding off of personal victories of the past, can really help keep you composed during pressure-filled moments.  Keep a running file in your mind and maybe more importantly, in your body, and practice visualizing them, so they are on easy recall when needed.  You know you can do it now because you’ve done it before.

3)           Joy: There is no prolific winner out there who doesn’t love the thrill of competition.  Most successful competitors are successful because of the joy it brings them to be doing their thing in difficult moments.  Doing their sport is synonymous with being them.  In 1975, when asked about his nerves while standing over his winning putt on 18, Jack said, “well, by golly, that’s the fun of it.”  Many people talk about having wobbly knees or a nauseous stomach, but he speaks of the pure joy of that moment, that putt, being Jack Nicklaus sinking that putt.