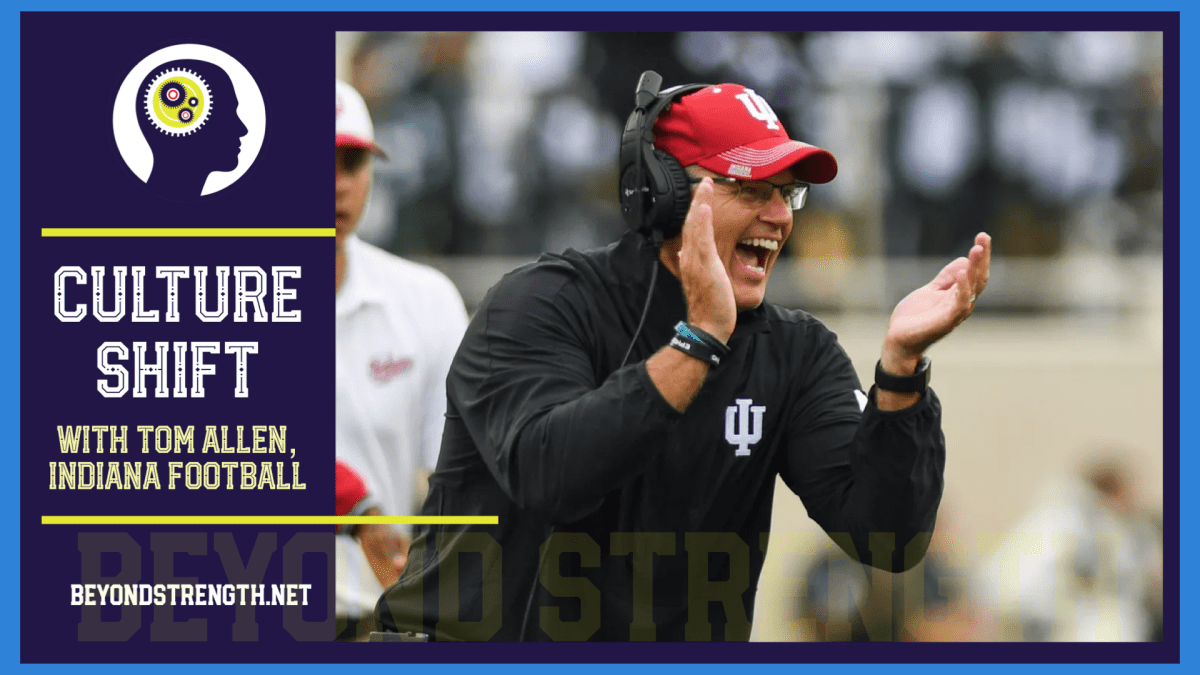 Changing the Culture of Indiana Football

On December 11, 2020, Tom Allen gave a keynote presentation at a virtual conference hosted by the Illinois High School Football Coaches Association. His guiding thesis was something all coaches, regardless of sport, would benefit from understanding: Mindset drives expectations and beliefs.

Indiana football had not been very successful before Tom Allen arrived. The Hoosiers had their moments, which include short successful runs under Coach Bill Mallory in the ’90s and a Holiday Bowl Win under Coach Lee Corso in 1979, but their overall winning percentage is a below average .423, and there rarely enter the minds of their high caliber Big 10 opponents.

That was before Tom Allen arrived.

Allen’s rebooted version of the Hoosiers are currently ranked #12 in the nation, they have secured their second consecutive winning season (currently sitting at 6-1), and their only current loss occurred while taking Ohio State down to the wire (35-42) while picking off Buckeye quarterback Justin Fields 3 times.

The key to his team’s success has been a mindset founded in ambition, competition, and love. “What does love have to do with football? Everything,” says Allen, adding that “I will love you so much that I won’t allow mediocrity out of you.”

In his first team meeting as head coach, he made that much clear. He then wrote three numbers on the board: 50, 26, 10. After letting the players guess what the numbers could possibly mean, he told them that it had been 50 years since Indiana had won the Big 10, 26 years since they had won a bowl game, and 10 years since they had a winning season.

It has now been 0 years since Indiana’s last winning season. In 2019, the Hoosiers finished 8-5 and landed them in a bowl game, where they narrowly lost to the SEC’s Tennessee Volunteers by one point (22-23). They will be heading to another bowl game this year, with a change to put another feather in the cap of the Allen-inspired culture of these new Hoosiers.

In his explanation of this cultural overhaul, we took away three key lessons: Purposeful Mindset, Leadership, and Sugar Cookies.

In any culture, it is essential to identify purpose. Allen’s purpose, which he delivers unequivocally and enthusiastically, is to create change in the hearts and minds of his players. He recommends his players and coaches to know what they believe and pursue it with passion and conviction. This “purpose fuels the mindset, and the mindset fuels everything you do,” he explained.

On one of his first meetings as head coach, he facilitated an exercise to align their team mindset. Allen passed out blank cards and asked his players to write down the record they anticipated for the upcoming season. There were 12 regular season games and the player’s responses were varied: 7-5, 8-4, etc.

The players were hesitant to put pen on paper. They didn’t really need to, they got the point. Allen went on to say that “if you think we’re going to lose to those teams, if you put down ‘Michigan State’ as one of your answers, then we our team heads off to East Lansing, we don’t want you to get on that bus. You just stay home.” It’s harsh. It’s honest. And it comes from a place of love.

I will love you so much that I won’t allow mediocrity out of you.

The purpose of the group has to be rooted in high achievement, in reaching heights the Indiana football program had seen for more than 50 years, and the mindset of the team has to match.

Leadership does not happen on accident. Coach Allen reiterates that on a daily basis to his team and his staff. To him, it is not enough to lead by example. He wants leaders in his program who are willing to speak up, to hold their team accountable, to support and motivate one another. Once purpose has been identified, Allen wants to see athletes leading each other in the direction of that purpose.

“You can’t leave leadership to chance, you have to show them how to do it,” he said.

Allen and his staff create opportunities for leadership development. They host team workshops, they bring in guest speakers, and they ask their players to stand up in front of their peers in moments of vulnerability. One of those moments of vulnerability comes when players have to respond to the question “where do you need help? How can we support you?” – moments like these offer a glimpse of vulnerability, develop trust within the team, and provide genuine opportunities for teammates to hold each other accountable.

If a player admits in front of the group that he sometimes has difficulty staying motivated in his academics, he welcomes his teammates into his life to fill that gap. They practice holding each other accountable to a shared purpose. They practice being leaders.

They are relentless in that pursuit. After all, said Allen with a gravelly voice and a grin, “we are on a mission, we’re tired of being mediocre.”

Tom took this one from the Navy Seals. A “sugar cookie” is a direction given to a Seal-in-training to go jump into the near-freezing ocean with all of one’s clothes on, then log-roll in the sand until they are covered head to toe. The result looks vaguely like a sugar cookie.

Allen said that a sugar cookie is performed not as a punishment, not for any rhyme or reason other than to set a mindset in place. These things happen. Sometimes life is hard.

They do this “because life’s not fair,” said Allen and sometimes, neither is football. The issues is that when life does not seem fair, “we don’t know how to respond.”

When that does happen – when life or football hands someone a “sugar cookie” – one can either complain about the unfairness or stand up, brush oneself off, and move on to the next positive thing. To do that one’s foundational, purposeful mindset has to be solid.

The final key to Coach Allen’s culture, to any culture, is intentionality. A culture has to be intentionally crafted and revisited on a daily basis. No great team has only been great some of the time. It has to be an operating standard.

Sugar Cookies are only overcome with the right mindset. Leadership is only possible in the presence of purpose. These are all components of a culture – one single component on its own is nice, but they align to create the culture.

Great cultures require intentionality and alignment. Tom Allen and his staff are working tirelessly in that direction.

With the Hoosiers trending up, posting the first back-to-back winning seasons since 1994, it seems that this culture is taking hold.

To schedule a workshop with your team or staff, CONTACT US – we look forward to working with you!