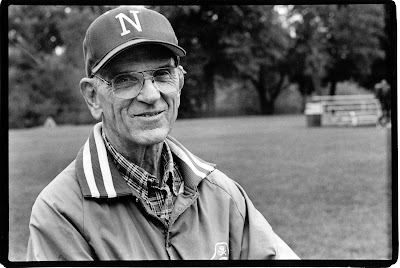 This week of the school year reminds me of the legacy of the North Shore Country Day School athletic department and the values of the school’s longest serving athletic director, Mac McCarty. I share an annual task this week which he took pride in and reflects his background: we will line the fields for the fall.

In the Independent School community when I began teaching, productive members of the teaching staff were termed “triple threats”. They taught, they coached, and they did something else significant for the community. I think the term originated from boarding schools where the third piece was typically dormitory supervision. Mac was the ultimate triple threat… maybe quadruple threat or more.

He arrived at North Shore Country Day School in 1947 first to coach basketball and baseball and teach science but a year later took on coaching the football team too. He eventually became the Athletic Director and ran the 10 week summer day camp.

Mac valued hard work that he learned growing up in western Minnesota on farms and because of that at North Shore he never avoided the grunt work. Even in his late 70s and early 80s, when I knew him, he would take a lot of pride in his work ethic learned in the Depression on a farm.

Before there were inground sprinklers on a timing system on our campus, every summer Mac would set up a network of garden hoses and garden sprinklers to keep the grass growing. Throughout the summer days and nights he would move sprinklers around the fields to hit the entire area.

Coach Jim Deuble tells a story from his college days when he drove by campus around 2 AM after being downtown socializing and saw Mac out on our athletic fields moving sprinklers around to keep the grass growing. This sometimes still happened when I got here in 1994. Coach Deuble – who has been my primary partner over the years in getting the fields ready – and I inherited that task for a couple of years, but we evolved to a water wheel then after 10 years inground sprinklers.

Jim Deuble and I lined the fields without Mac that August 1994.

The first task to lining a football field is to find the corners. Mac’s technique which we copied was to push a shovel into the ground and listen for a clink signifying you hit the buried steel pipe that marked the corner. That first time Jim and I lined the field together it took us all day to find the corners. When Mac returned from a trip and we told him how long it took us to find the corners, he just laughed and said it only takes him about 10 minutes. After over 40 years of lining, he knew exactly where those buried corner markers were.

From that point forward it became a game every year for Jim and me to see how quickly we could find the buried corners to the field, eventually using a metal detector. I don’t think we ever found the corners in 10 minutes but we certainly found them a lot quicker than our first year lining.

Mac survived a tragic car accident in November 1988 in which his first wife Evelyn died. That was an especially sad time for the school because the accident happened while he was on the way to the funerals for North Shore students Alex and Nicholas Piper where Mac was to give a eulogy. Alex and Nicholas had been killed in a car accident the week before.

Mac bounced back in part due to his love of ballroom dancing. In 1994 when I arrived he had remarried, and he was not around much the summer of 1994 because his second wife Julie liked to travel. That is I am sure why Jim and I lined without him that August.

During my first four years at North Shore, I was the boys JV Basketball Coach. In my first game, our team lost by 40 points to Ida Crown. I knew I needed some help. I went to Mac and he was my assistant coach for the next three seasons. We did not win a lot of basketball games at any level in those days, but I learned a lot from Mac, and he liked to tell me fascinating stories from his past.

Mac came from an especially impressive basketball coaching tree. At Hamline College he was coached by Joe Hutton Sr. who was a legendary basketball and athletic director at Hamline. After college and Mac’s service in the Navy in World War II, Mac earned a master’s degree at Springfield College. At Springfield he coached under John Bunn. Bunn had learned the game from Phogg Allen at Kansas and Phogg Allen had learned the game from none other than James Naismith the creator of basketball.

Mac loved to teach the 5 man weave and the 3 man weave offenses in basketball. These were patterns of movement and passing that were effective if the offensive players were patient and willing to wait until the defense tired and open shots – usually layups – arose. Our offensive players were not always willing to be patient enough. However, despite their occasional claims that “this doesn’t work” it did and more than anything else it taught a style of play that engaged the entire team on the floor.

It’s no surprise to me that Mac loved repeated patterns and the patience, energy and intensity it took to do it correctly again and again believing that you could just outlast your opponent that way.

Whether it was basketball, baseball or football, Mac believed that the game was for the students in it and ultimately was supposed to be a learning experience. So he insisted that students call their own plays and learn to manage the consequences of those decisions. It’s well known he would yell from the football sideline “Run it Again!” but quarterbacks could change the play which is unheard of in most high schools today.

Fortunately for today’s Raider basketball players, I fired myself as Boys JV Basketball Coach after the 96-97 season and hired another legend John Schneiter to lead our boys basketball program. Frank Dachille took over as JV Boys coach. The next season Mac would sit on the bench with John and even took notes in practice. I do not think there has ever been a more powerful coaching bench in any school’s history. Between the two, I believe they had over 1300 basketball wins.

Mac passed away on December 28th 2000 The school had employed him for over 50 years. I am proud to say that I am now connected to Mac McCarty’s coaching tree which connects me to John Bunn, Phogg Allen and James Naismith. But I am even prouder to be associated with a coach and educator who believed in hard work, never avoiding the grunt work, being patient, consistently showing up, and through that just wearing down your opponents.

For me, today the 2022-23 school year begins. I love being Athletic Director of a small school that often surprises the larger schools in our conference and our state with the quality of our teams and our preparation. It all starts with our legacy that I celebrate this week!

For more from Coach McHugh, find his writing at http://raiderathletics.blogspot.com/