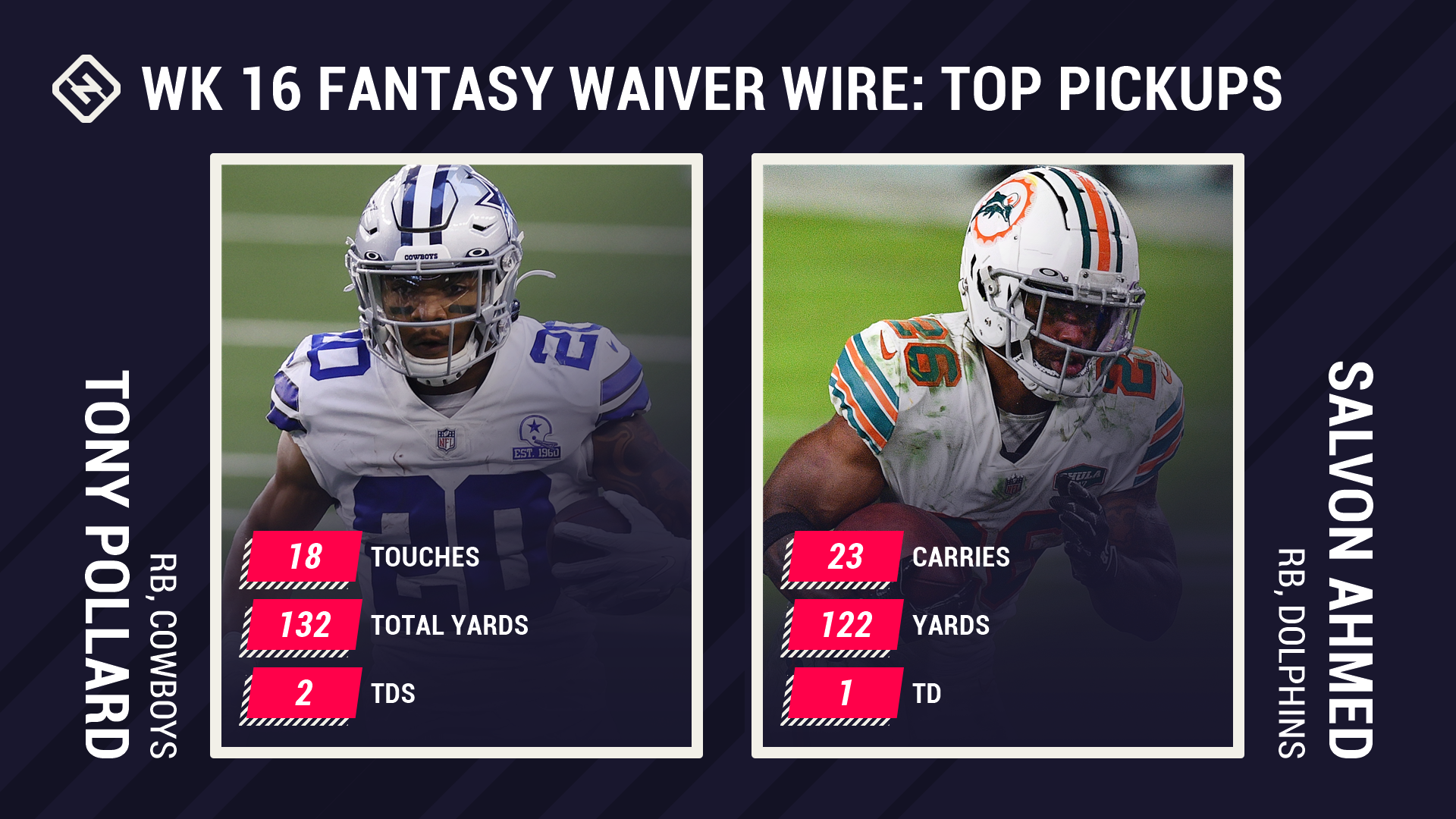 Every year, random RBs and WRs are starting for teams in fantasy football championship games, and this year, it looks like Tony Pollard and Salvon Ahmed will be among those players, as both headline our top Week 16 fantasy waiver wire pickups and free agent adds. Pollard and Ahmed weren’t the only “handcuff” RBs to break out last week, as Sony Michel also played well in relief of Damien Harris and Le’Veon Bell scored even before Clyde Edwards-Helaire suffered a potential serious leg injury. Russell Gage, Lynn Bowden, Keke Coutee, Jalen Reagor, Greg Ward, and Darnell Mooney are also seeing frequent targets and could find themselves in WR3 spots next week.

Our full free agent list features a host of streamers at QB, WR, TE, and D/ST for Week 16, including Jalen Hurts, Rashard Higgins, Tyler Eifert, and the Chargers D/ST, among many others. Matchups are more important than ever with your season on the line, so don’t be afraid to explore all possibilities. The streaming options can be found at the end of this list. If you’re in the market for a new kicker or can’t live with the idea of not looking at a list of kickers until next August, you can check out our Week 16 kicker rankings.

Obviously, there’s no reason to hold back your waiver claims now, so go all-in for whoever you might need or whoever you want to keep your opponent from getting. And don’t be attached to anyone you’re not going to play this week. You’re better off having viable starting options and emergency handcuffs (at multiple positions) on your bench than a middling player in a bad matchup who’s been on your team most of the year.

There’s no need to overthink things when it comes to who you actually choose to start, but make sure you give yourself the best options and play proper defense against your opponent.

Le’Veon Bell, RB, Chiefs. Bell’s ownership is down to 52 percent in Yahoo leagues, but with Clyde Edwards-Helaire suffering a serious-looking leg injury in Week 15, Bell figures to be highly owned ahead of Week 16’s game against the Falcons. Bell played well against the Saints even before CEH exited late in the fourth quarter, finishing with 63 yards and a TD on 16 carries. He also added 14 receiving yards on his lone target. It’s reasonable to expect Bell to get close to 15 touches next week, and even though Atlanta has a decent run defense, Bell will be a prime candidate for a touchdown, as Kansas City should move the ball at will through the air.

Tony Pollard, RB, Cowboys. Ezekiel Elliott (calf) was a surprise scratch in Week 15, and Pollard took advantage, totaling 132 yards and two touchdown on 18 touches. Pollard did most of his damage through the air (6-63) until a late 40-yard TD run, but it’s clear the Cowboys have no problem leaning on him as long as Zeke is out. It’s also worth mentioning that Pollard had just one fewer carry than Elliott when both were active in Week 14. It seems likely that Pollard will continue to see enough touches to merit flex consideration next week against Philadelphia whether Elliott plays or not, and if Elliott is out again, Pollard will be a solid RB2.

Salvon Ahmed, RB, Dolphins. In his first game since Week 11 because of a shoulder injury, Ahmed picked up right where he left off, running 23 times for 122 yards and a TD against the Patriots in Week 15. In his three starts this year, Ahmed has averaged 21 touches, but it’s important to note that all three games came with Myles Gaskin (COVID) inactive. Gaskin is expected back next week against Las Vegas, so it’s unclear who will see more touches. Both backs have played well enough this year that it’s fair to expect somewhat of a split, and against the Raiders’ porous defense, that puts them both in flex territory.

Sony Michel, RB, Patriots. Michel was the primary back for the Patriots on Sunday with Damien Harris (ankle) out of action. He found a lot of success against the Dolphins, as he totaled 74 yards on 10 carries and added an eight-yard catch. With the Patriots officially eliminated from the playoffs, Harris’s status is even more up in the air, so Michel should be picked up ahead of a solid matchup with the Bills. Buffalo has allowed the 10th-most fantasy points to RBs this season and just saw Melvin Gordon score twice on them. Michel could find the end-zone if Bill Belichick continues to trust him.

Jalen Hurts, QB, Eagles. Hurts was impressive again in his second career start, throwing for 338 yards and three TDs while adding another 62 yards and a touchdown on 11 carries. A matchup next week against Dallas, who entered Week 15 having allowed a league-high 28 passing TDs, should help him continue his late-season surge. Most fantasy owners playing in their fantasy championship game likely don’t need to stream a QB, but Hurts has a high floor because of his rushing ability and high ceiling because of the matchup, so he’s well worth starting if you don’t trust your normal QB.