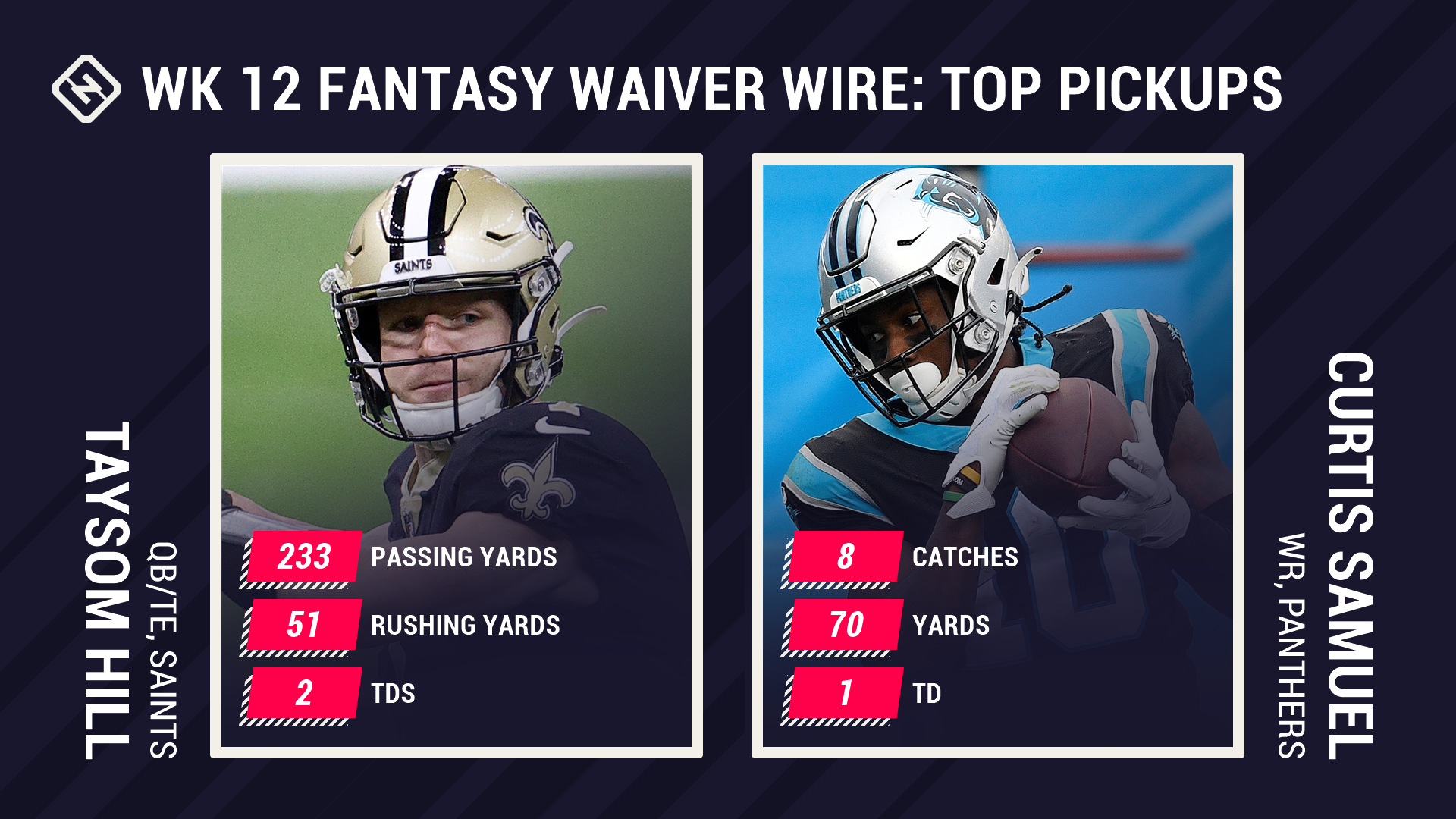 Taysom Hill was the talk of the fantasy football world all week, and he did enough in his first start at QB to be among the top Week 12 fantasy waiver wire pickups and free agent adds. Of course, if you’re playing in a league where Hill is TE-eligible, he’s almost certainly already on a team. In the leagues in which he’s only eligible at QB, he’s now officially worth stashing. That’s true for players at other positions, too, like Curtis Samuel, Carlos Hyde, La’Mical Perine, Frank Gore, Michael Pittman Jr., Nelson Agholor, and Tim Patrick.

Yes, that list of names doesn’t exactly inspire a lot of excitement, but at this point in the season, you’re generally not going to find a lot of breakouts or diamonds in the rough. It’s all about injury replacements and matchup-based streamers. Our full free agent list is full of similar players, including several who were on bye last week (Wayne Gallman, Jordan Reed, and Cam Akers). It’s important not to forget about these guys just because they didn’t play this week. As always, we also have a bunch of Week 11 streaming recommendations at QB, TE, and D/ST, which can be found at the end of this list. If you need a new kicker or are searching for things not to be thankful for this week, you can check out our Week 12 kicker rankings.

You’d likely have to be pretty desperate to use a high waiver claim this week. As much as we like Hill, it’s unlikely you have that glaring of a need at QB. Guys like Agholor, Samuel, and Reed could provide plenty of value, but neither are worth a high or even mid-tier claim with all but two teams having already had their byes (and no teams off next week). Some of the RBs are more interesting, mainly Gallman because we know he’ll be starting for at least the next two games. If we know for sure that Peterson will be starting next in a highly favorable matchup or Gore will have the backfield to himself, then it’s possible they’re worth a high claim if you have a big hole at RB/flex.

There’s no real need to “save” your waiver claim position at this point, especially if you’re fighting for a playoff spot, but if you don’t need an immediate fill-in, then you might as well wait and see if there’s a big injury or breakout next week.

Taysom Hill, QB/TE, Saints. Fantasy owners weren’t sure what to expect from Hill in his starting debut under center, but he played the entire game at QB. While he didn’t run as much as fantasy owners would like early, he still managed to get two rushing TDs — one on a designed rush near the goal line, another on a scramble in the red zone — and finished with 51 rushing yards on 10 carries. He also held his own as a passer (18-of-23, 233 yards, no INTs). It didn’t hurt that Hill had a highly favorable matchup against Atlanta, but he gets that same matchup in Week 13. Next week, he’ll face an average Broncos pass defense, but because of his rushing ability, Hill will remain a high-floor option with a high ceiling, too.

Curtis Samuel, WR, Panthers. Samuel had been seeing ample work (and production) over the past several weeks, so his 49-percent ownership rate in Yahoo leagues should have been much higher. After Samuel popped off for 74 total yards and a TD on nine touches in Week 11, it figures to skyrocket. Samuel has now had at least five targets in six straight games, and he’s also had at least one carry in every game this year. The Panthers unfortunately have a bye in Week 13, but next week they take on a Vikings defense that’s been weak against the run and pass this year. Samuel is a great WR3/flex option, and he also has a favorable Week 14 matchup against Denver.

Frank Gore/La’Mical Perine, RBs, Jets. Gore started and got the first three carries of the game before Perine plunged in a five-yard touchdown. From that point on, it was a pretty even split between the two before Perine injured his ankle and exited for the remainer of the game. He finished with 33 yards on eight carries, while Gore turned in a line of 15 carries for 61 yards and a TD (plus another 10 yards on two catches). If Perine is out next week, Gore will once again handle of the bulk of the RB touches, and while he isn’t exactly a high-ceiling player, getting 15-plus touches against a mediocre Dolphins run defense is enough to make Gore a decent flex play. If Perine is active, we like his upside more, but both are worth stashing.

Michael Pittman Jr., WR, Colts. Pittman continued his late-season surge with three catches for 66 yards and a score against the Packers. It looked like he was on his way to a much bigger game, as almost all of that production happened early, but it was still nice to see Pittman post 50-plus yards for the third straight game. His three targets is a little disappointing, but he had 15 in the previous two games, so he could easily see an uptick next week against Tennessee. The Titans entered Week 11 allowing sixth-most fantasy points per game to WRs, so Pittman will be a worthwhile WR3/flex next week, as well as the three weeks after that (@ Texans, @ Raiders, vs. Texans).

Nelson Agholor, WR, Raiders. After catching six passes (nine targets) for 88 yards and a TD in Week 11, Agholor has now scored in five of the past seven games. He’s also had a couple of duds in that stretch, but it’s clear that Agholor is the Raiders’ top deep threat and No. 2 target after TE Darren Waller. He’s a prime streamer the next two weeks against the Falcons and Jets.