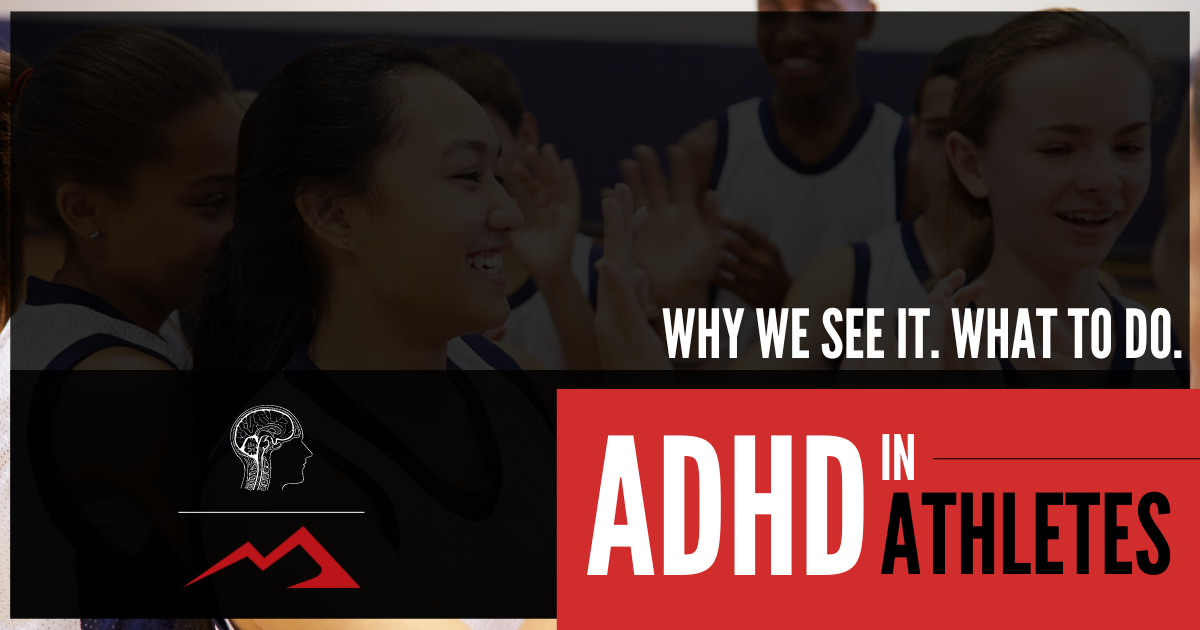 ADHD in Athletes: What We See, What to Do


It’s no secret that athletes diagnosed with Attention-deficit/hyperactivity disorder (ADHD) can still reach the top of the athletic pyramid in today’s world.  Just look at the successes of Olympians and outspoken mental health advocates Simone Biles and Michael Phelps.

In fact, there’s a strong correlation between athletics and ADHD…yet many athletes with ADHD don’t actually know that they have it.

Sport can serve as an incredible vehicle for humans with ADHD, and getting tested and receiving a diagnosis is the first step towards creating a blueprint for success in sport and life.

The strong correlation between ADHD and sport may sound puzzling, but in reality it makes perfect sense.

“We estimate that 4-6% of the general population have ADHD while in the athletic population it’s closer to 10-15%,” Premier’s head of ADHD testing Janet Finlayson says.  “There are reasons why individuals with ADHD are drawn to sport.  Things like the level of excitement that sport provides, rapid change, and an outlet for energy are all huge things.”

No two cases of ADHD are the same, yet some of the common behaviors for individuals with the condition include excess energy, desire for constant movement, and a tendency to hyperfocus on one task at hand.

“The term attention deficit disorder should really be changed to attention regulation,” Finlayson says. “It’s not that people with ADHD can’t ever pay attention, it’s that they have a difficult time regulating. Sometimes they can pay too much attention to one thing at the expense of other things.”

That hyperfocus can actually help athletes with ADHD excel in some sports.

“If you’re a pitcher or hitter in baseball where there’s one thing to focus on, or playing a sport like hockey or soccer where there’s constant movement, that intensity of focus can give an athlete a competitive edge,” Finlayson says.

Because of the ability to focus or the craving for an energy outlet, many individuals with ADHD are naturally drawn to sport…and often steered toward sport by their parents.

“If a child is over-active or needs an outlet for that energy and excitement, youth athletics is one of the first places that parents will typically turn to,” Finlayson says.

Whether it’s focusing on one objective or the constant movement, sport provides a controlled and constructive environment for athletes with ADHD (both diagnosed and not) to channel their energy.

“It really is a nice outlet,” Finlayson says.  “In sports they get rewarded for that behavior, and in school they are disciplined for it.  It’s a way for them to be themselves and embrace that and use it to their advantage.”

Why Getting Tested Is Important

Many athletes who have already been diagnosed with ADHD have been given tools and skills to help them thrive in sport, school, work, and life.  Yet for those who haven’t or for parents who think their child might have ADHD, getting tested can be the first step towards creating a healthy blueprint for success.

In a world of self-diagnosis, it’s important to remember that ADHD isn’t a one-size-fits all and there are different forms of the condition that need to be addressed in different ways.

Different diagnoses require different forms of attention and getting tested is the first step of getting to the core of an individual’s personal diagnosis.

For youth athletes, getting a diagnosis earlier in life can help them avoid future struggles with things such as anxiety and depression.

“The longer you go without getting tested and diagnosed, the more likely you are to develop things like anxiety and depression that complement the ADHD,” Finlayson says.  “The correlation translates more later in life whereas if you can get it diagnosed and treated earlier, you can get ahead of the game.”

At the end of the day, getting tested won’t just help an undiagnosed athlete develop tools to grow in sport, but lifelong skills to help them manage their ADHD in all other assets of life.

What Premier Offers for ADHD Resources and Testing