Interleaving is one of the most intriguing elements of cognitive science currently being utilised in education. It offers the potential to accelerate student learning, and yet it is an area that most teachers tell us they struggle to implement.

In this blog, InnerDrive psychologist Bradley Busch shares his thoughts on the five things he has changed his mind on when it comes to Interleaving.

Before I jump into sharing what I used to think about interleaving vs what I now think, I thought some context may help. Through many discussions with the rest of the team at InnerDrive, reading numerous research papers and working closely with thousands of teachers, over the past few years I have changed my mind on a number of areas on how best to apply interleaving.

I’d also like to give a shout out to a few educators whose work has helped developed my thinking in this area: Jonathan Firth for taking the time to chat with me (you can see the video below) based on his brilliant interleaving guide which you can find on his website; Amarbeer Singh Gill’s book, which contains the clearest description of interleaving I’ve come across; Jade Pearce’s recent book, What Every Teacher Needs to Know; and Sarah Cottingham for allowing me to ask her a million dumb questions. I’d strongly recommend following all of them on Twitter and reading their work (as the whole “seeing further by standing on the shoulders of giants” thing is totally true).

This article was also inspired by one of my favourite ever blogs, from teacher Zach Groshell on how Cognitive Load Theory has transformed his practice. I think the format he used to chart what he used to think vs what he now thinks is brilliant. I have followed a similar template here, as I think doing so a) allowed me to self-reflect and improve as a practitioner and b) acts as a reminder to not be too fixed to what I currently think (as it may change in the future).

What I used to think: Interleaving is essentially a form of Spacing, but with a bit more nuance.

What I now think: Although the Spacing Effect may play a partial role in Interleaving, the benefit comes primarily through “discrimination learning”.

Recent evidence has confirmed the mechanism as to why the way that Spacing and Interleaving work is different. Interleaving is underpinned by “discrimination learning”, which describes how students need to distinguish the differences between similar topics. For example, this study highlights how in Biology, students need to learn about “transcription, transduction, transformation and translation – four terms with similar spellings and meanings”.

Beyond just the technical meaning, discrimination learning can help students spend more time thinking harder about the appropriate strategy to employ when solving the problem. This doesn’t happen when they do Blocking, as they are just repeatedly implementing the same thought process on autopilot.

What I used to think: You should interleave different subjects.

What I now think: You should interleave concepts within a topic, especially ones that students tend to get confused by.

As I had previously thought that Interleaving was similar to Spacing, it would make sense to interleave subjects. However, if the benefit is primarily on helping students compare and contrast “similar but different” things, then it would make more sense to focus on ideas, concepts and events that have a similar classification.

For example, instead of trying to interleave Maths, French and Geography, it would make sense instead to interleave specific examples from within the same subject. Within Politics, this could mean interleaving the end of Margaret Thatcher’s and Boris Johnson’s respective stewardship of Prime Minister. In doing so, students would be able to identify what these two events had in common (i.e. they did not leave office due to losing a general election) and what the key differences between them were (i.e. the roles their respective Chancellors of the Exchequer played in their final weeks).

What I used to think: You can interleave your curriculum.

What I now think: It’s better to interleave within an individual lesson.

This is because proximity of content is key. The closer in time and space the things that you are interleaving are, the easier it is to remember the similarities and differences between them. If the gap is too long, misremembering is more likely to occur.

That being said, I think there is a lot to be said for factoring in Spacing when it comes to the curriculum. Revisiting material regularly, especially when students have to remember large amounts of information for a long period of time, is essential. But for specific interleaving, within lesson is probably more appropriate.

What I used to think: Interleaving is only for some specific subjects (i.e., Maths).

What I now think: Although some subjects may be more naturally suited to Interleaving (as well as being more impactful), I believe you can do Interleaving within any subject.

When running CPD for teachers on the science of learning, a common question I get on Interleaving is that it feels more intuitive for some subjects than others. Typically, subjects like Maths are in the former category, and subjects like History (which is typically more chronologically based) or Art (which is more skills based) in the latter.

I used to go along and agree with this, as I didn’t want to rock the boat too much. However, I think this belief was based on me having offered a poor explanation as to what Interleaving is. If you view it as similar to spacing, that would make sense.

However, I now believe every subject can apply Interleaving. Every subject contains areas that can be compared and contrasted with one another. There are always times when you would choose to do X instead of Y. Interleaving can help students to become aware of the thought processes as to when those situations may be.

What I used to think: Students should interleave their revision.

What I now think: Teachers are better placed to do Interleaving within their lesson. An easier and bigger win for students when studying independently would be to focus on Spacing and Retrieval Practice.

Because Interleaving involves uncovering misconceptions as well as identifying similarities and differences, it often needs some guidance. Self-selecting what to interleave is inherently very difficult. Having an expert (i.e., the teacher) on hand to tease out the contrasts really helps. This means that I think it is an area of cognitive science that can be helpful in the classroom, but less so during independent study. When it comes to revision, I think students are on much safer ground prioritising Retrieval Practice and Spacing. 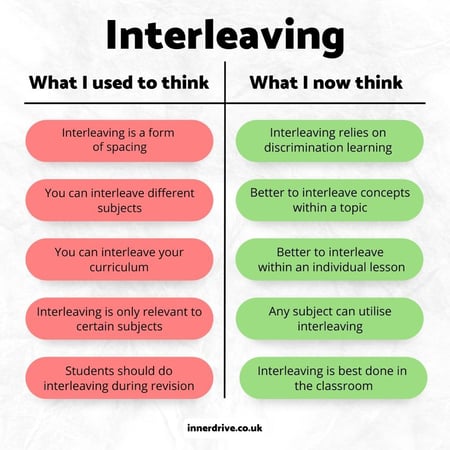 bonus – The optimal number of things to interleave

What I used to think: There is no optimal number of items to interleave, but if there was, it would probably be 3-4, as this had some sort of link to working memory capacity

What I kind of now think: I still don’t know if there is an optimal number, but if in doubt I’d say focus on just two items (especially for novice learners).

This is because working memory is way more fragile than I had previously appreciated and arguably makes discrimination learning easier and more apparent. That being said, I am still open to changing my mind on this one as more research emerges.

When it comes to applying cognitive science to education, I fully believe that no-one knows anything 100% for sure. We are all just guessing. Some guesses are better and more informed than others. We can be more confident about general principles, as opposed to specific strategies. This means that mistakes will be made along the way, but we should embrace that and accept that changes in what we think are inevitable.

I have no doubt that I will look back in a few years and reflect that what I currently think has changed. As Muhammad Ali once said: “If a man looks at the world when he is 50 the same way he looked at it when he was 20 and it hasn’t changed, then he has wasted 30 years of his life”.