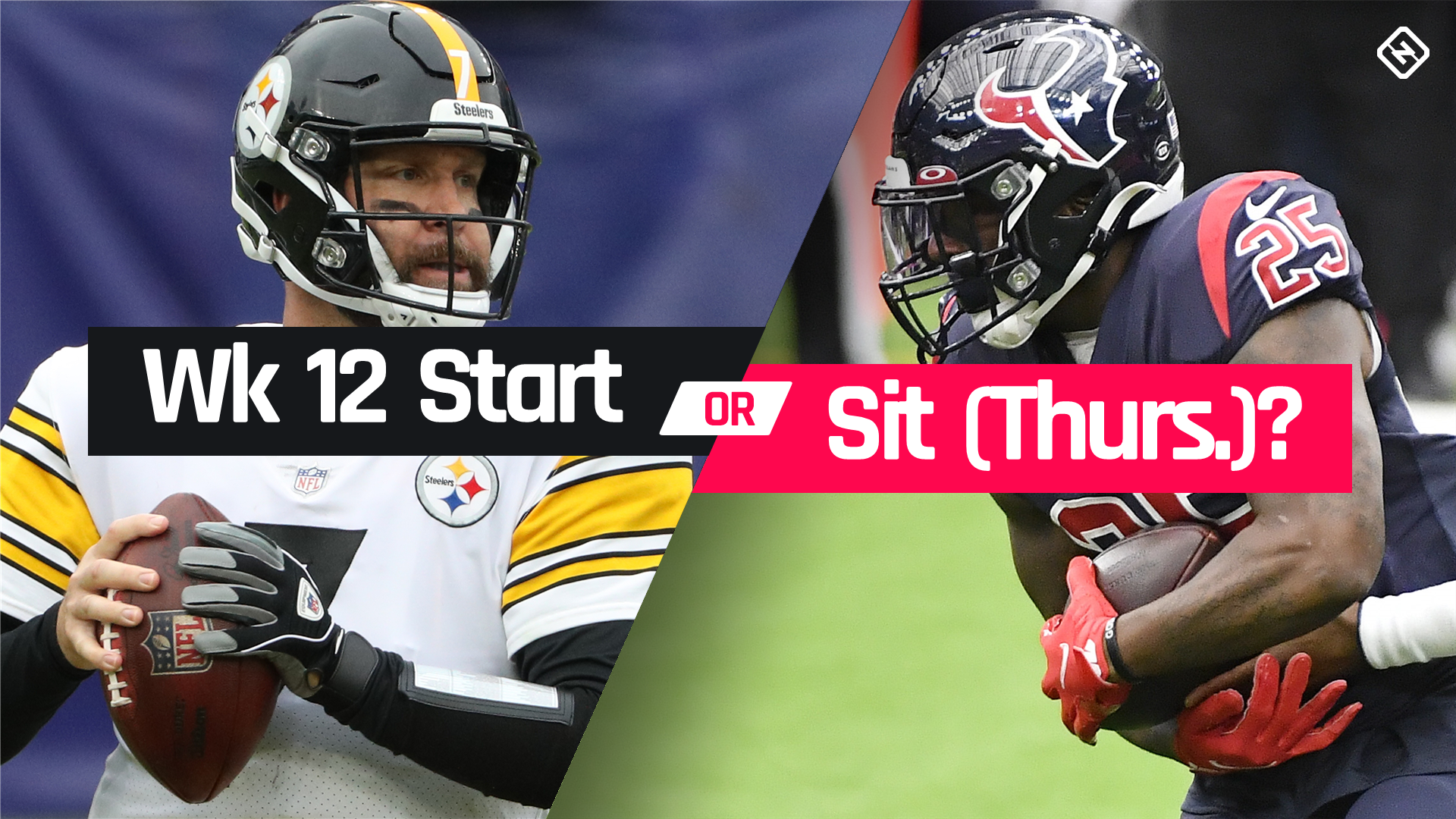 Who to start, sit in fantasy football for NFL Thanksgiving games Week 12 Watching NFL games on Thanksgiving in 2020 isn’t just a reason to eat more and spend a little less time talking with family. It’s also Week 12, which carries heavy fantasy football implications for everyone trying to get into the playoffs in seasonal leagues. That means you need some timely lineup advice on who to start and sit in Thursday’s three matchups.

Because we have six teams to break down instead of two, let’s get right down to the heaping helping that comes with “the mini-Decider” and throw in some lineup decisions for the DraftKings showdown slate. For start ’em, sit ’em advice for the full slate of Week 12 games, click here:

Watson is coming off a monster game against the Patriots defense and is consistently getting his two top wideouts to produce, and now Houston’s No. 3 (Randall Cobb) and No. 4 (Kenny Stills) are hurt, which will further boost the targets for Fuller and Cooks all over the field. … Johnson hasn’t looked good filling for David Johnson (concussion), but the Lions are the absolute best matchup for running backs all-around. …. The Lions are too giving in the red zone to go with Fairbairn. … Akins (5-of-6, 83 yards) stood out in their tight end committee in Week 11 and should get more looks with Cobb down from the slot.

Swift (concussion) got in a limited practice on Tuesday, giving him a chance to play after missing Week 11’s glorious matchup with the Panthers. This matchup is just as spectacular, set up for him to explode and pick up where he left off as (finally) a featured rookie stud in Week 10. That said, if he misses the game, it’s hard to trust Peterson or Johnson given how inept they were in Carolina in a favorable fill-in spot. … Hockenson is locked in as a TE1 every week. … Stafford should rebound with at least some garbage passing stats in the second half. … Jones was contained by the Panthers and will draw the tough coverage of Bradley Roby with Kenny Golladay (hip) set to miss another game. … Amendola is a better bet than Marvin Hall to produce more consistently for half- or full-point PPR. … The Texans are too giving in the red zone to go with Prater.

Gibson’s rookie season isn’t getting a lot of noise, but he has racked up 742 scrimmage yards and eight TDs as one of fantasy’s most consistent scorers in 2020. He’s locked in as a RB2 with upside very week. … McKissic will keep getting enough receiving work to FLEX him in PPR-leaning leagues. … McLaurin’s talent has been more tapped into by Smith. … As for Smith, the numbers might say he’s a viable streaming QB1, but he should be reserved for two-QB leagues with no bye weeks, even with the good matchup. … It’s hard to trust the defense after Dallas woke up offensively last week. … The Cowboys have gotten better against the tight end, but Thomas did drop a 4-60-1 line on them in Week 7.

Elliott finally went back to his hundy ways against the Vikings and also looked more inspired, scoring in the passing game. Hopefully he keeps up the RB1 mojo by feasting on Thanksgiving. … Cooper and Lamb are now in a better spot with Dalton because of their intermediate route-running versatility. … Schultz scored last week and has a good same-name connection with Dalton, and this matchup is solid. … Zuerlein is sneaky to rack up points at home. … Gallup’s deep threat has all but disappeared from the offense without Dak Prescott, making him droppable in most leagues. … The Cowboys’ defense cannot be trusted. … Dalton had three TDs in Minnesota, making him viable for 250 yards and two TDs here.

The Steelers have suddenly become more vulnerable against the run in recent weeks, and Edwards will be the clear lead with both Mark Ingram and J.K. Dobbins on the COVID-19 list. Edwards had 16 carries for 87 yards and a TD in the Week 8 meeting in Pittsburgh. … Andrews is starting to look like his 2020 self again. … Tucker is a no-brainer as your weekly field-goal artist with no byes. … Jackson had 208 yards and two TDs in the first matchup, but he also had two interceptions and was contained to 65 yards rushing, making him less than a QB1. … Brown has gone from “Hollywood” to “Oxnard.” … Snead isn’t sneaky at all. … The Steelers don’t make enough mistakes go with a Ravens defense that’s been struggling of late. … Hill has a modicum of viability as a deep-league flex filling in for Ingram and Dobbins behind Edwards.

Conner had his best game in a while minus a TD last week in a get-well game against the Jaguars. … Johnson and Claypool continue to be on fire getting the most key targets from Roethlisberger. … The Steelers should get some more sacks and picks of Jackson. … Roethlisberger has a limited ceiling this week, putting him outside the QB1 range in 12-team leagues. … Smith-Schuster is sitable in 10-teamers in a tough matchup in the slot. … Ebron did score in the first meeting, but the Ravens have gotten much better vs. the tight end. … Boswell had only four points in the first game and the numbers say no, but this feels like a bit of a field-goal fest with him having one or two more than Tucker to help the Steelers win.

The foundations of this team were making sure to get the clear top QB and clear top defense, which we did. Then the bargain price for Edwards and his volume helped set everything else in motion. We did a mini-stack with Watson and Cooks and got McLaurin in there, too. We like the Steelers’ dynamic duo to keep getting the job done, as well.