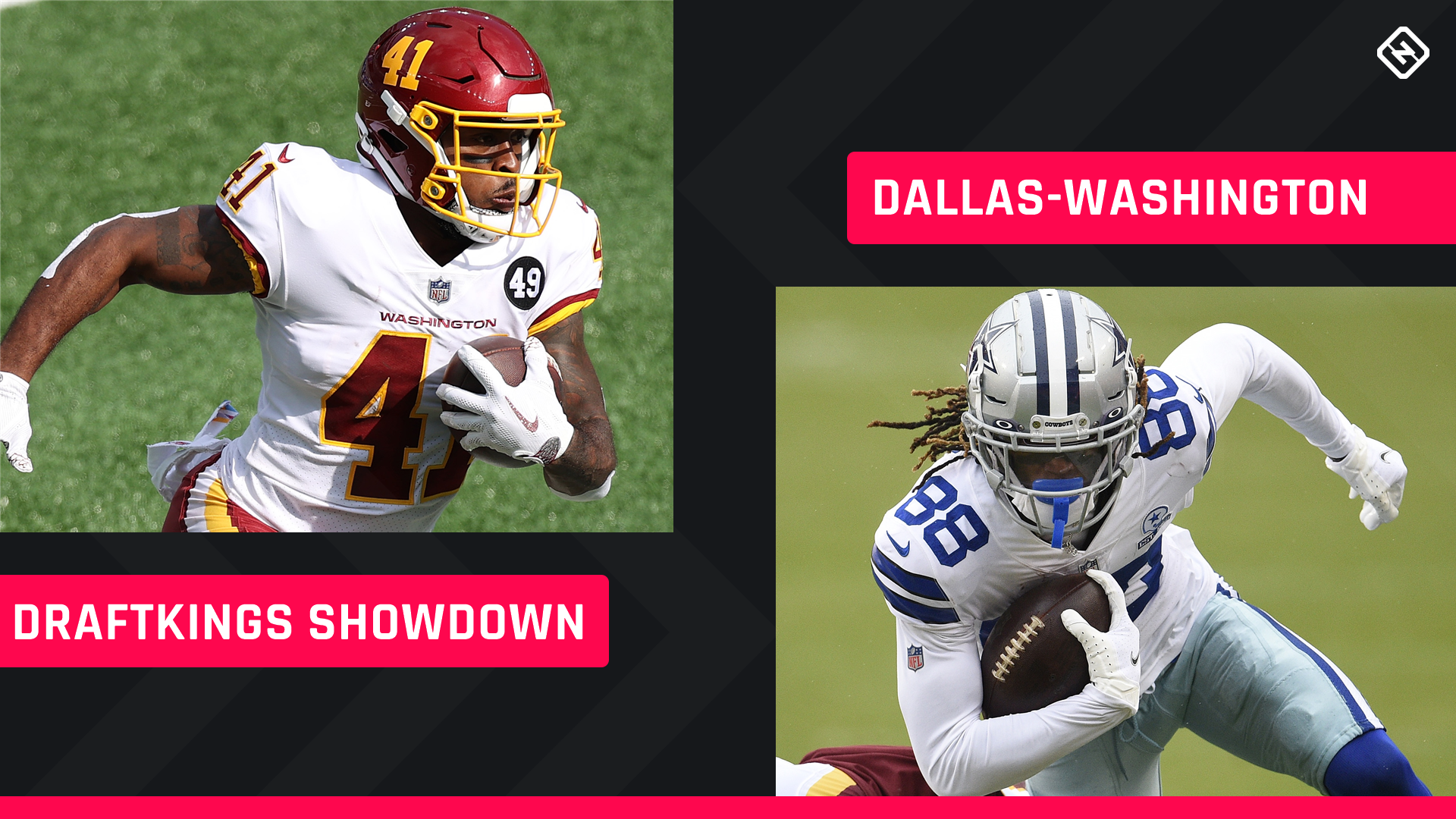 There’s nothing like a good NFC East rivalry game on Thanksgiving. The Cowboys and Washington Football Team are going to be squaring off in a battle where the winner will temporarily be in first place in the division. This should be a well-fought game, and NFL DFS players looking to play a Thursday DraftKings Showdown lineup should have plenty of viable picks to choose from given the sheer number of offensive weapons each side has.

In this lineup, we have a slight lean on Washington players because of Dallas’ porous defense, and we’re fading the quarterbacks entirely since they only have one multi-TD game combined in six starts this year. We have a lot of receiving action in this lineup, too, so that should give it a high ceiling thanks to DraftKings’ PPR format.

Many will focus on Terry McLaurin as the captain here since he’s the highest-priced player on the slate and the Cowboys are one of the weakest teams against WRs. That said, spending down a bit allows us to add more top-tier talent to this lineup, and McKissic’s ceiling is sky high. In his past three games, McKissic has seen a whopping 33 targets and is the preferred checkdown for Alex Smith. He has posted at least 9.9 DK points in six of his past seven games, and Washington could opt to split the college WR out wide more often to take advantage of this Dallas defense. McKissic’s ceiling his high but his ownership might not be, and that makes him a perfect contrarian captain choice.

We’re fading McLaurin as a captain, but we’re not fading him all together. McLaurin has logged double-digit DK points in all but one outing this year, and that came against Jalen Ramsey. He scored 22 DK points in his last outing against the Cowboys, and Dallas has allowed a league-high 19 receiving TDs to wideouts. Adam Thielen did damage against the Cowboys last week (eight catches, 123 yards, two TDs), so it’s safe to assume that McLaurin will follow suit.

No rookie RB has more rushing TDs than Gibson’s eight. He has scored in four straight games, and that includes a contest against the Cowboys in which he totaled a career-high 128 yards on the ground. Gibson should have a chance to do more damage and continue his four-game streak of 13.5-plus DK points.

Finally, we’re getting into some Cowboys here. Washington has the league’s best pass defense in terms of total yardage, but that shouldn’t stop Dallas from trying to get the ball into the hands of their playmakers. Lamb has posted back-to-back games with at least 16 DK points and has found the end zone twice despite playing with two different QBs. He should continue to see plenty of targets (6.8 per game since Dak Prescott’s injury) for the team.

This price seems way too low for Cooper, who can be one of the NFL’s best receivers when all is going well. He has averaged 16 DK points per game over the course of the season, and his only clunkers came in the game that Prescott got hurt and the game that Ben DiNucci started. Cooper put up 15.5 DK points last time he faced Washington and could have similar output. Like Lamb, he has scored in back-to-back games.

We only had $1,100 left in our budget after targeting some of the bigger playmakers in the contest, so we had to take a chance on Wright here. The undrafted rookie has played a little less than a third of the team’s snaps in the past three weeks, but he has posted 10 catches for 96 yards in that span. That includes a six-catch, 59-yard game against the Lions. If he can put up that kind of production, he would be a huge boost for this lineup. In a favorable matchup against a weak Cowboys secondary, all it will take is one big play or a couple of catches for Wright to pay off this price tag.