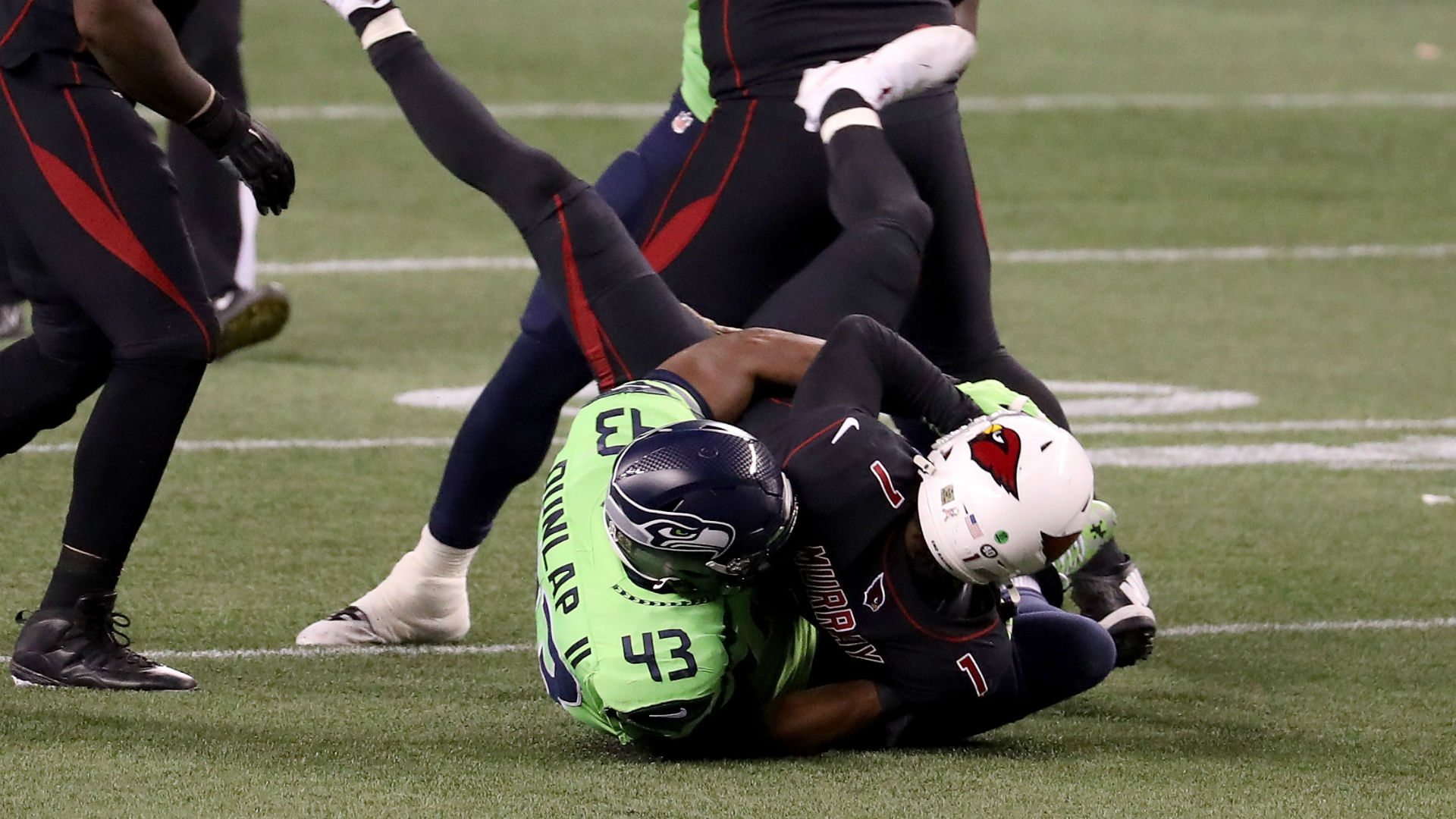 After a Week 7 offensive onslaught between the Seahawks and Cardinals, Seattle’s defense proved the difference maker in their Thursday night rematch.

The Seahawks (7-3) limited Arizona’s big plays and held the Cardinals (6-4) to a season-low 314 yards in a 28-21 home victory. With the game in the balance in the fourth quarter, Seattle’s defense delivered a safety and fourth-down sack to seal the game.

Seattle’s offense, led by Russell Wilson, was well-balanced all night long. Wilson completed 23 of 28 passes for 197 yards and two touchdowns, and added 42 yards rushing. More importantly, Wilson took care of the football. He had turned the ball over seven times (four interceptions, three lost fumbles) in his previous three games, and threw three interceptions in the Week 7 loss to Arizona.

A more secure performance from Wilson, coupled with Seattle’s ground attack led by Carlos Hyde (14 carries, 79 yards, TD) gave the Seahawks steady production throughout the night. And steady was all they needed thanks to their best defensive performance of the season.

Wilson led a touchdown drive on the opening possession with a 25-yard bomb to D.K. Metcalf to give Seattle the early 7-0 lead. The defense held Arizona to back-to-back three-and-outs to start the game, but the Cardinals got into the end zone early in the second quarter on a 1-yard run by Kenyan Drake to tie the game at 7-7.

The Seahawks answered right back on the next possession, with Wilson delivering a perfect pass to Tyler Lockett for an 11-yard score. Seattle kicker Jason Myers missed the PAT, but redeemed himself at the end of the half with a 27-yard field goal to make it 16-7 going into the locker room.

The Cardinals came back strong in the second half as Kyler Murray led a touchdown drive on the opening possession, capped with a 4-yard TD pass over the middle to Dan Arnold to make it a 2-point game. But Seattle again provided a prompt response as Hyde punched it in from 2 yards out to give the Seahawks a 23-14 lead.

Murray again led another drive, tossing a 3-yard TD pass to a wide open Chase Edmonds on third and goal to make it 23-21 with 13:19 left in the fourth quarter. The Cardinals came up with a crucial stop on the ensuing Seattle possession, giving Murray a chance to help Arizona take its first lead of the game. But on the first play of the drive Murray was flagged for intentional grounding at his own 2-yard line. The following play, a holding penalty was called on right guard J.R. Sweezy, giving Seattle a safety and a 25-21 lead with 9:18 remaining.

Myers hit a 41-yard field goal on the ensuing Seattle possession with 2:19 remaining, giving Murray one last opportunity to tie the game and send it to overtime. But on fourth down from the Seattle 27-yard line he was brought down by Carlos Dunlap, allowing Seattle to run out the clock and end the game.

Sporting News tracked live scoring updates and highlights from Seahawks vs. Cardinals on “Thursday Night Football.” Follow below for complete results from the NFL Week 10 game.

11:18 p.m. — Timeout, Cardinals.  Carlos Hyde fumbled the ball but recovered. Arizona challenged the recovery but the call stands, so it will lose its first timeout of the half. Seattle has the ball, third and 18 at the Arizona 23-yard line, 2:31 to play.

11:02 p.m. — SAFETY.  After Murray is flagged for intentional grounding at the Arizona 2-yard line, a holding penalty on J.R. Sweezy in the end zone results in a safety. Seattle now leads 25-21 with 9:18 remaining.

10:59 p.m. — Seahawks punt.  The drive stalls out just shy of midfield and Arizona will take over at its 14-yard line with 9:30 remaining. Plenty of time here for the Cardinals to pull ahead.

9:53 p.m. — FIELD GOAL, SEAHAWKS.  Wilson hits Metcalf in the facemask with a pass but the receiver can’t haul in the TD. Seattle settles for a 27-yard field goal by Jason Myers to take a 16-7 lead at halftime.

9:41 p.m. — Arizona goes three-and-out.  Nice play by K.J. Wright to bring down Murray in the backfield on third and short. Seattle takes over at its 13-yard line with 1:17 remaining.

9:36 p.m. — 2-Minute Warning.  Seattle comes up short on third down and will have to punt from deep in its own territory when play resumes.

9:08 p.m. — TOUCHDOWN, CARDINALS.  Replay confirms that Kenyan Drake got the ball across the plane before the fumble and it’s a 1-yard TD. It’s tied up at 7-7 with 13:51 remaining in the second quarter.

Murray looked sharp on that drive, especially on this 25-yard completion to Maxx Williams as he was getting hit.

8:54 p.m. — Seahawks go three-and-out.  A holding penalty on Seattle center Damien Lewis wipes out a 41-yard pass from Wilson to Metcalf and Seattle has to punt again. An unsportsmanlike conduct penalty gives Arizona the ball at the 50-yard line, 1:43 left in the first quarter.

8:47 p.m. — Cardinals go three-and-out.  A false start and a blown up screen results in another Arizona punt. Seattle takes over at its 22-yard line, 3:45 left in the first quarter.

8:43 p.m. — Seahawks go three-and-out.  Isaiah Simmons sacks Wilson on third down to force a Seattle punt. Arizona takes over at its 36-yard line, 5:57 left in the first quarter.

8:37 p.m. — Cardinals go three-and-out.  Kyler Murray can’t quite connect with DeAndre Hopkins on third down and Arizona punts on its first possession. Seattle takes over at its 23-yard line, 8:06 remaining in the first quarter.

8:22 p.m. — Cardinals win the toss.  They’ll elect to defer and the Seahawks will get the ball to start.

All Thursday night games throughout the 2020 NFL season will start at 8:20 p.m. ET, now with more TV options thanks to the addition of Fox to the broadcast.

Below is the complete schedule for Week 10 of the 2020 NFL season.