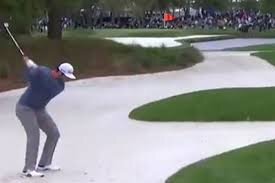 
Anyone who watched the final round of this year’s ‘fifth major’, The Players Championship, will have seen the ascendant Spanish golfer Jon Rahm make one of the worst decisions I have seen in my years of watching tournament golf.  Holding a share of the lead when he came to the par 5 11th hole, his drive found the bunker on the left side of the fairway (pictured above).  He was blocked from a straight line to the green by trees on his left sight line, but he decided—against the counsel of his caddie—to go for the green.  The shot required him to hook a shot out of the bunker, against the prevailing wind, over water, and to a pin that was on the right side of the green.  His shot did not hook enough, found the water, provoking a temper tantrum, as he swore, “I was so fu**ing sure the first time,” implying that it was his caddie’s fault for instilling the fatal dose of doubt to the shot, and revealing he had way too much going through his head to do anything well.  Probably an imprudent shot under any circumstances, but with one of his biggest wins on the line, it was downright self-destructive.  The commentators: Hicks, from the booth: “That is very, very perplexing;” Maltbie, from the course: “Really a poor decision;” and finally, lead announcer Paul Azinger, the new Johnny Miller: “You know, when you’re nervous, you don’t just hit poor shots, you think poorly.”  His comment supports the point I made in my post “Mastering the Moment.”  One of the reasons that players play and think poorly in pressure moments is because everything has sped up in their body and their mind, and they are not doing enough to counteract the very normal hastening that comes with elevated nerves.  In that piece, I lay out some protocols that will help slow everything down the next time you are nervous.  Furthermore, Rahm and his caddie need to do some serious processing so that they are not at odds the next time a big moment comes along.  As I have said in yet another post, that processing should start by reviewing tape of this incident multiple times, and for Rahm to be brutally honest with himself to see if he felt in his right mind, and to be honest about all the physiological reactions he remembers having, so he can use them as cues next time to slow down and rely on his caddie more not less.  The sad thing is that, even after his bogey on 11, he was still in the tournament, until three bogeys later when he wasn’t.  Sadder still is that golfworld magazine had written a piece after his Saturday 64 saying that he had overcome his temper tantrum days and would be very difficult to beat on Sunday.  It looks like there’s more work to be done.*

In a lead-up to the tournament, PGATOUR.COM ran a piece about David Duval’s win at The Players in 1999 during a dominant period when he had a 30 percent win percentage in his tournament starts, a remarkable statistic.  Duval speaks of that win as one of his most special because of how difficult the course was playing (e.g. highest winning score in the event’s history), and how much patience he had, and how he “held it all together.” And what he said about that tournament and that period is, “It becomes pretty easy.  There’s a hyperfocus…There’s an emptiness in your mind, if you will.  Some clarity.  It all kind of ties together.”  Here, too, he is validating a point I made in these pages (“Think Like Dustin: A Lot Less.”), and while you might not be able to play like Duval at his prime, you can certainly practice getting into that mind state.  One thing such practice does is slow down your subjective experience of time.  I know it will help you, and I certainly know it could have helped Jon Rahm last weekend in The Players.**