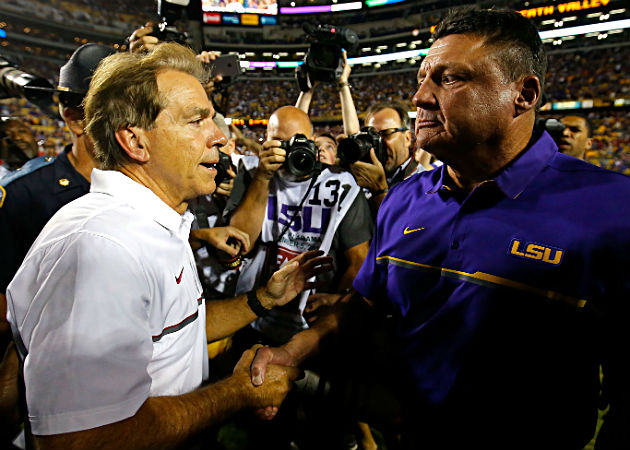 Alabama-LSU game could be rescheduled for Dec. 5, per reports It seems as if Alabama and LSU may get to play each other this season after all.

Per multiple reports — the first by Yahoo Sports’ Pete Thamel — the SEC is planning to rework its schedule so the Crimson Tide and Tigers can play on Dec. 5. The teams’ original game, scheduled for Nov. 14, was postponed because of a COVID-19 outbreak among LSU’s team.

Alabama and LSU were originally slated to play Arkansas and Ole Miss on Dec. 5, respectively; those games could be moved as well.

MORE: Why was Alabama-LSU postponed?

That said, Alabama and LSU’s meeting is contingent on previously scheduled games playing out this weekend, per a report from Sports Illustrated’s Ross Dellenger. The SEC on Monday announced that Arkansas-Missouri would be postponed because of a coronavirus outbreak on the former; that could potentially play into the situation as well.

Assuming every team can play its full 10-game slate, below are Alabama and LSU’s revamped schedules:

Arkansas would likely reschedule its game against Missouri on Dec. 19.

If Alabama does play LSU on Dec. 5, the question then becomes whether Nick Saban, who tested positive for the disease on Wednesday, would be available to coach against the Tigers. If not, Alabama coach Steve Sarkisian would likely continue his role as interim coach following the Tide’s Saturday game against No. 22 Auburn.